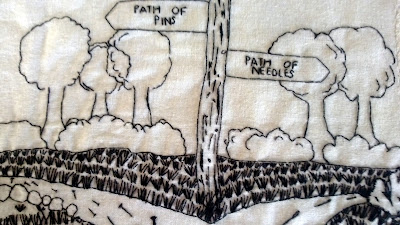 In some of the earliest surviving texts of Little Red Riding Hood, when the girl is met by the wolf in the wood, he asks her if she will take the path of pins, or the path of needles. It is of little consequence which path the girl chooses; whichever she does, the wolf chooses the other path and begins a race to get there first.

What is of significance, however, is the objects chosen to name these two paths. One may think that they are appropriate names for paths taken in a cautionary tale, which is precisely what Little Red Riding Hood is thought of as being today; warning girls against talking to strangers and sexual "immorality".

But the tale has roots, like many of the old tales, as a story of female cunning, strength, and coming of age (don't forget in many of the earlier versions of the tale it is Little Red, not the woodsman, who cuts her grandmother out of the wolf's belly).

So, why are the needles and pins of such significance in this coming of age story? Well, according to this (far superior) article, in the French villages where the European version of the fairytale was originally collected, young girls symbolically passed over into womanhood by going to spend one winter apprenticed to a seamstress.

Therefore, Little Redcap's journey up the path of pins/needles possibly symbolises her (potentially dangerous, as evidenced by the wolf) journey into womanhood.

There may be a slightly more arbitrary reason for the pins and needles; fairy tales, or, quite literally, "old wive's tales" were normally shared by groups of women, who gathered to sew, spin, weave and knit. Telling old stories would make these sometimes onerous tasks more enjoyable, and weaving references to their handiwork into the tales was a way of personalising them; of making them relatable.

I've always been intrigued by the tale of Little Red Riding Hood; aged fifteen I completed an embarrassingly shoddy project based on the story for my Art GCSE, and "She whipped a pistol from her knickers" from Roald Dahl's anarchic take on the tale is one of my favourite lines of literature of all time.

It seems that mine and the tale's paths have crossed yet again in the making of the contents of the pocket on the second page of Big Teeth (and the title of the project itself, of course, is partially a reference to "My, what big teeth you have!")

Each of the pockets contains an embroidery alluding to the references to textiles techniques which are commonly found in fairy tales (for the precise reasons I gave above). For this one, I decided to create the clearing in the woodland where the path of pins and the path of needles begin.

By embroidering literal pins and needles along the paths, I am alluding to the dangers the heroines of fairy tales face along their journeys, and perhaps afterwards (I don't believe in happily ever after, particularly not with a "Prince Charming"!) 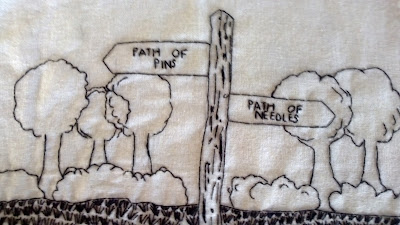 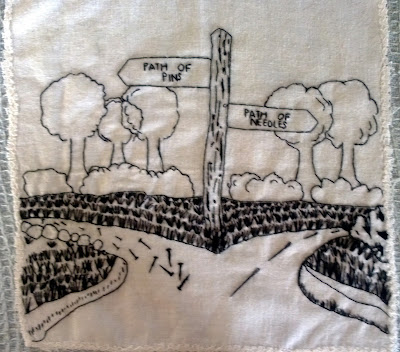 I decided to stick with black thread to give a flat, story book illustrative style, and I am quite pleased with the results (even if the trees do look like broccoli as a result!)

With the contents of the first page, I was alluding to the ball of string used to escape the maze in the myth of Theseus and the Minotaur, and to the "thread" of bread or pebbles Hansel and Gretel leave in the woods to find their way home by. I indicated this by carving two tiny trees from birch bark and stringing a red thread between them (another allusion to Little Red Riding Hood?) 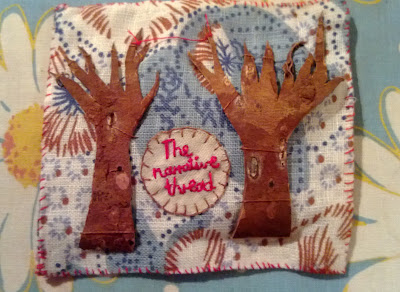 The text I chose for this piece was "the narrative thread"; the thread which runs through all our lives, and our oldest stories; our myths and fairy tales, which make up so much of our history and culture. 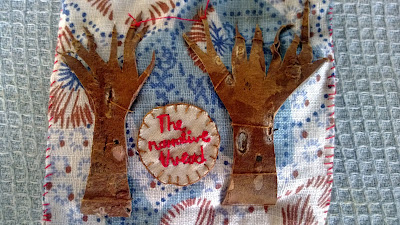 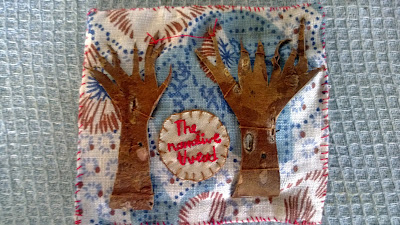 I have but two more little embroideries to complete for Big Teeth, and then I can stitch the whole thing together; I'm actually going to make my deadline for the exhibition at this rate!

Posted by Kate Elisabeth Rolison at 09:47