Ages after everyone else has got their results, I’ve finally handed in my dissertation. In a matter of weeks I should know whether I’ve been awarded a 2:1 or (gulp) a First.

Before embarking on the real world, I’m having a little holiday in the Scottish Highlands. That means one thing – lots of stitching!

But before I get to that, I have a couple of bits of news. Firstly, I’ve been asked by Catherine at Significant Seams to intern on an embroidery project masterminded by Oxfam and the Craftivist Collective. I’m only too happy to be on board; craft with a social message is right up my street, and I could practically be sponsored by Oxfam given the percentage of my wardrobe made up of clothes from its shops! Not entirely sure what the project involves yet, but I’m very excited.

Secondly (and possibly even more excitingly), my work is going to be shown in a professional gallery in October. Not only that, but (and here comes more boasting), it will be shown alongside work by the likes of Susan Hiller and Cecil Beaton! The exhibition is called A Curious Invitation, and has been curated to accompany the launch of a book of the same name, all about famous parties in literature. My contribution is my embroidered handkerchief The Onion Cutters’ Club, which is based on the chapter The Onion Cellar which appears in The Tin Drum. Check out my artist bio, along with those of the other artists, on the gallery website. I must say I feel incredibly inexperienced compared to them; I’m the youngest artist in the exhibition!

Thirdly, during this year’s E17 Art Trail I will be writing a couple of reviews for the Trail’s official blog. I’m very excited to see this year’s artists’ efforts, particularly an exhibition on crying which I imagine will have a nice dialogue with The Onion Cutters’ Club.

Finally, I’ve finally succumbed to Twitter! Now that I don’t have Facebook any more, where else to take my inane (t)witterings? Jokes aside, I’ve heard it’s very handy for networking. Initial discoveries include Feminist Hulk and the (genuinely witty) witticisms of my wondrous ex-uni-mate (and future poet laureate) Adam’s bear Aloysius (inherited from Sebastian Flyte, but of course).

Now that all that’s out of the way, on to the sewing! I can’t seem to stop making pieces for Psychobitches, despite the fact that it hasn’t been officially unveiled yet. This latest piece follows in the tongue-in-cheek, snarky vein of its two predecessors. 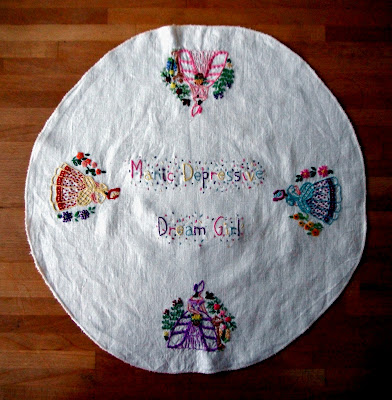 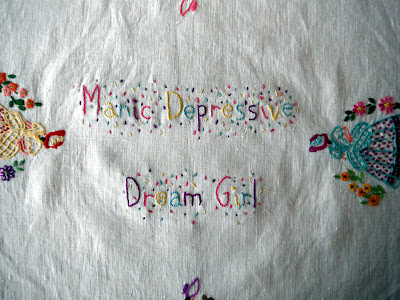 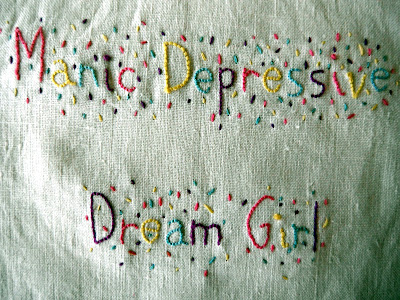 I’ve never been a Zooey Deschanel fan, and now I know why. Firstly, there’s the fact that the archetype she repeatedly plays, the Manic Pixie Dream Girl, reduces female characters to two-dimensional emotional props for male leads. But I also have a bone to pick with the name of the trope itself. Anybody who’s experienced mania can tell you that there’s nothing “dreamy” about it; unless by “dreamy”, you mean “nightmarish”. Sure, there’s the initial euphoria, the sense that you can do anything. But soon this tips over into an energy that’s out of control. You become irritable (and irritating), aggressive, incomprehensible. (When I was manic, I filled an entire notebook with writing, that – looking back – made no sense.) And when you come down – boy do you come down.

This would suggest that the trope appropriates terminology referring to mental illness and applies it to a particularly nauseating brand of “quirkiness” (and this is coming from someone who's about as twee as they come).

Despite this, you can suffer from mental illness and still be a fulfilled, interesting, attractive, productive, accomplished, kind person – with the right support.

Thus, there’s an aspect to my piece that isn’t tongue in cheek at all; you can be a manic depressive and a dream girl. Whether you'd want to be anybody's dream girl is another question...

Oh, what a thrill to be mentally ill.

A companion piece to Oh, to be young and insane,for the forthcoming collaboration Psychobitches which a friend and I are working on - watch this space!

I hope this piece is taken in the spirit in which it is intended; that is, bitter and knowing irony (speaking as a bonafide mental myself!) 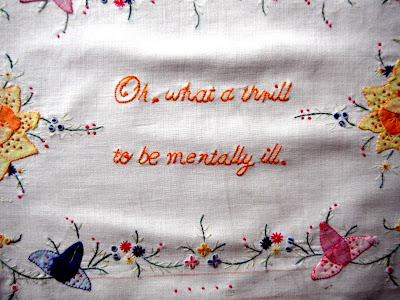 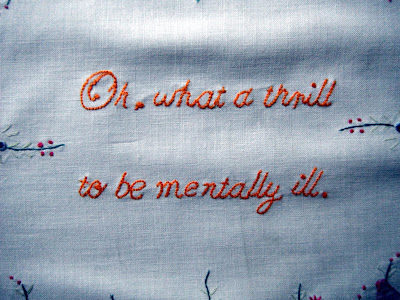 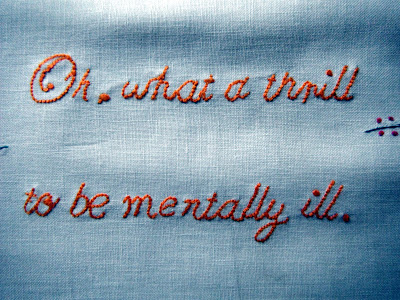 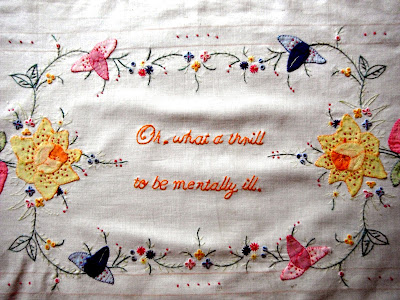 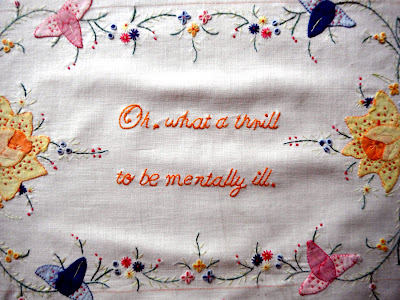 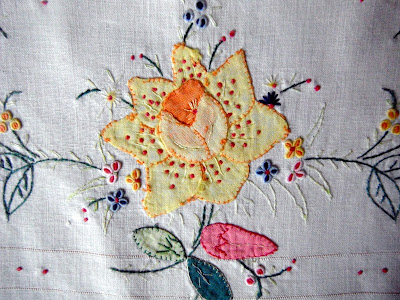 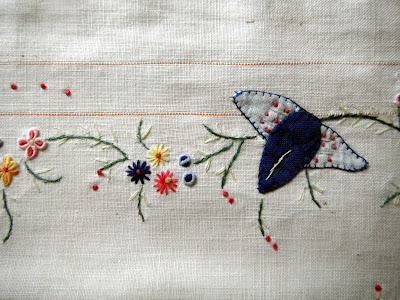 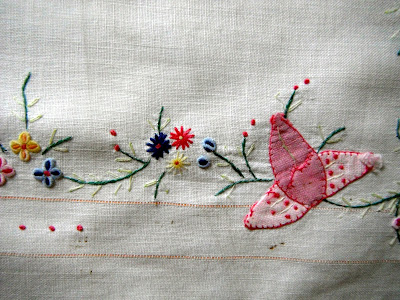 Oh, what a thrill to be mentally ill is stitched on to a vintage hand-embroidered and appliquéd linen which I picked up in my favourite shop, the wonderful The Shop on Cheshire Street just off Brick Lane.
Posted by Kate Elisabeth Rolison at 10:54 No comments: