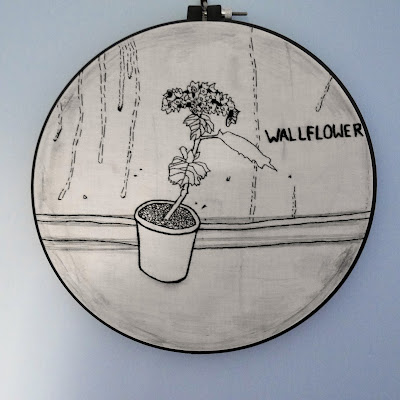 I have read the clickbait phrase "25 is the hardest year of your life" at numerous points over the past year. I can only speak personally, but I would tend to disagree; I got my quarter life crisis out of the way early (at the age of 19).

I think I know who I am and what I want... it's just a question of how to get it.

That's not to say things haven't been, and aren't, difficult - they are. But I'm willing to do the work and I know that things will get better. Life has been busy and hard and so I haven't posted on here since July (wow), but I have been making and doing and I want to share all of it with the world more.

And so, here is a piece harking back to my eternal occupation with language around flowers and negative connotations.

To find my wallflower, I literally typed "plant that looks sad" into Google. It came up with this rather pathetic looking hydrangea. I translated it into a pen and ink sketch and then this embroidery/pencil hoop art.

If you would be interested in purchasing the piece, it is £50 posted to the UK, and is backed with black felt, and can be hung on the wall straight away. Drop me a line at katerolison@googlemail.com if you'd like a wallflower for your wall.

Next will come a fungi-themed hoop in a similar style.

After my lengthy absence (and only NINE blog posts this year compared to 78 last year, crikey) I really would love to write more often, but I don't want to put any pressure on myself, either. Attention spans, including my own, have become so much shorter in the short space of a few years, and it's so much easier to Instagram everything than be considered and exploratory and think things through. I think it might be helpful and fulfilling to begin doing so again, though.

Plans for blog posts in my inimitable old 1000 words+ style include a post considering poet and lunatic John Clare and his incarceration and escape from the asylum that is incidentally now my mother's place of work (though no longer an asylum!), and round ups of a few work shops I've run of late.

Watch this space; good things are coming. I write that as much for me as for you.

Posted by Kate Elisabeth Rolison at 09:27 No comments: