Apologies for my lack of posting the past few weeks, I've been beading frantically to make a deadline (and caught the beading bug; I'm still beading! Hopefully I will soon be able to share an example of Victorian cross stitch beading here).

But by the weekend, all the beading had been taken care of, and it was a glorious Saturday. Pip and I took a trip down to Borough Market to sample veggie pie and mash and posh ice cream in the spring sunshine, en route to the Fashion and Textiles Museum to visit the exhibition Artist Textiles. Artist illustrated fashion is another bug I've caught lately (see my last post for proof!), and so I was keen to catch this exhibition, which encompassed artists from Picasso to Warhol. I hoped I would find inspiration for my summer dream project; creating frocks from textiles I've designed myself. And I wasn't disappointed, although I can't say I think much of Picasso as a textiles designer; his designs were too cluttered, clashing, and indistinct for my tastes, with slightly bizarre subject matter (or maybe it's just me who doesn't fancy being bedecked in chickens and plates of fish!)

A contemporary of Picasso's who had rather more success as a textiles designer in my eyes (though is still a little hit and miss) is Dali. His famous melted clocks work rather well as a necktie, his similarly melting telephones create a strikingly modern, hallucinatory silk headscarf, and a simple dress covered in a "flower ballet" is one I would love to slip on. 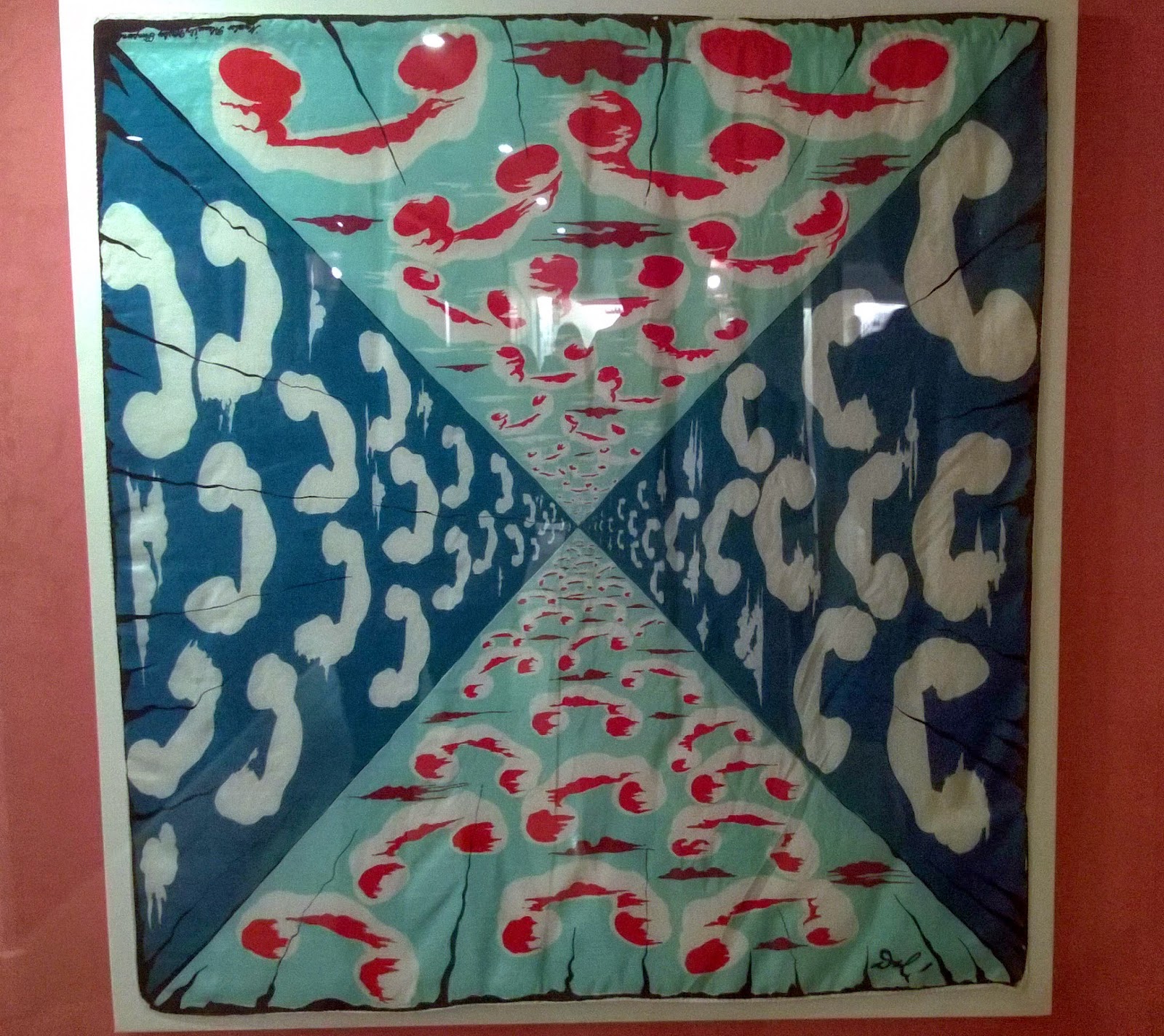 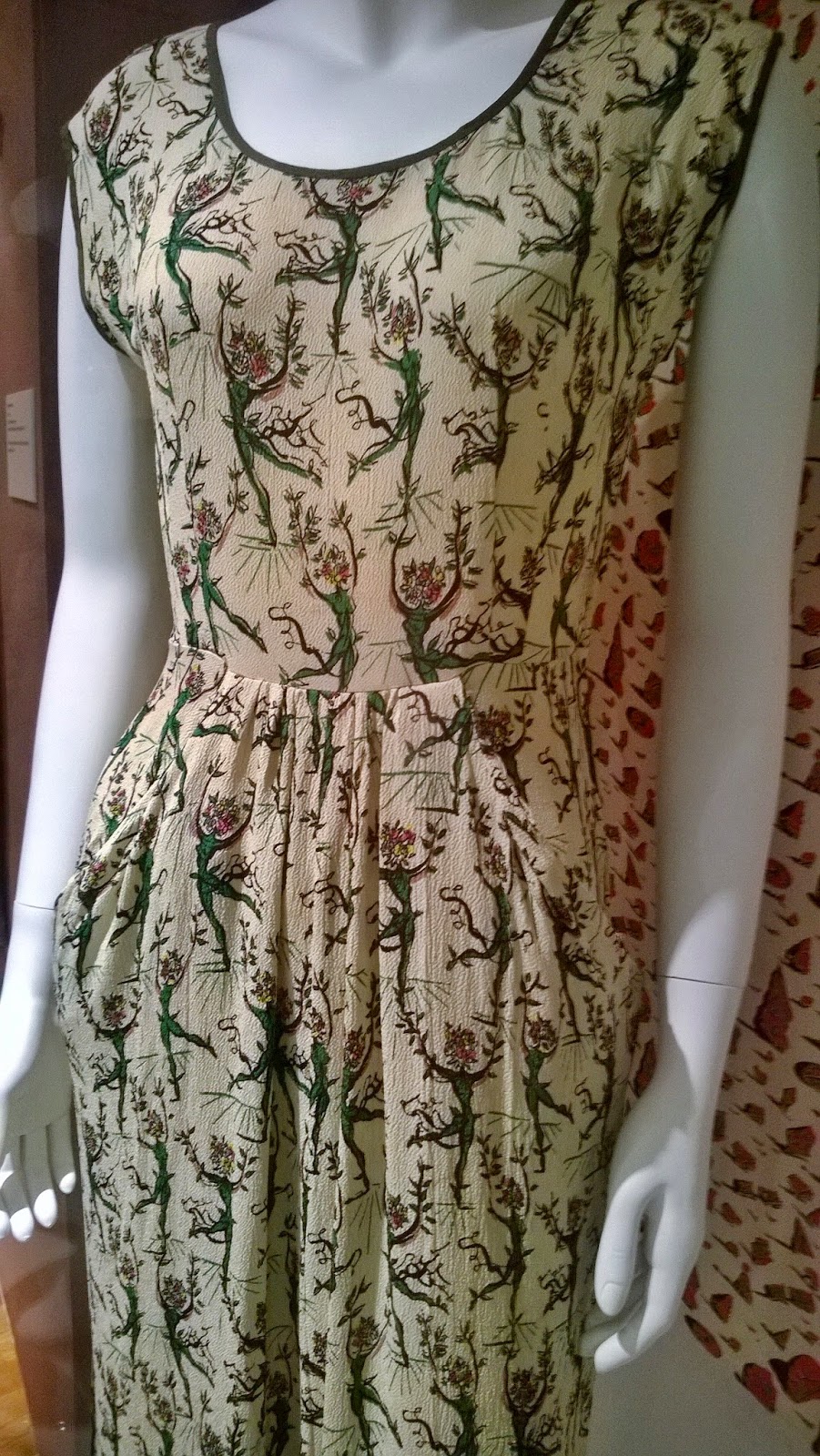 Marcel Vertes, a Hungarian costume designer and therefore perhaps well suited to designing fashion fabrics, produced some gorgeous, similarly flora-related prints in the 1940s, though I can't help but feel their beauty was somewhat wasted as they were made up into silk headscarfs, which would be worn folded, obscuring the design. That's not to say I wouldn't like to add them to my burgeoning headscarf collection! The smiley sleepy radishes in particular are adorable. 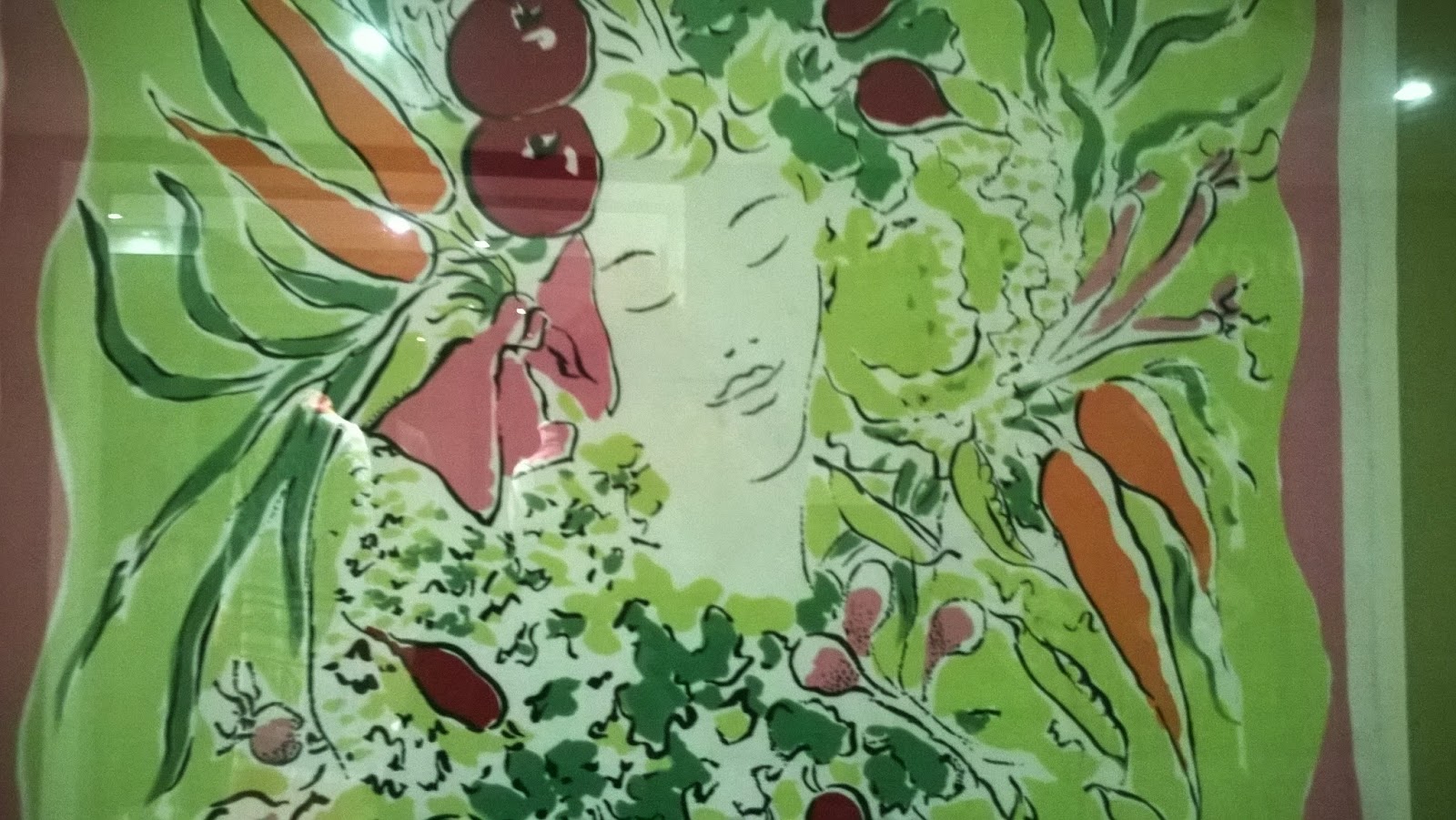 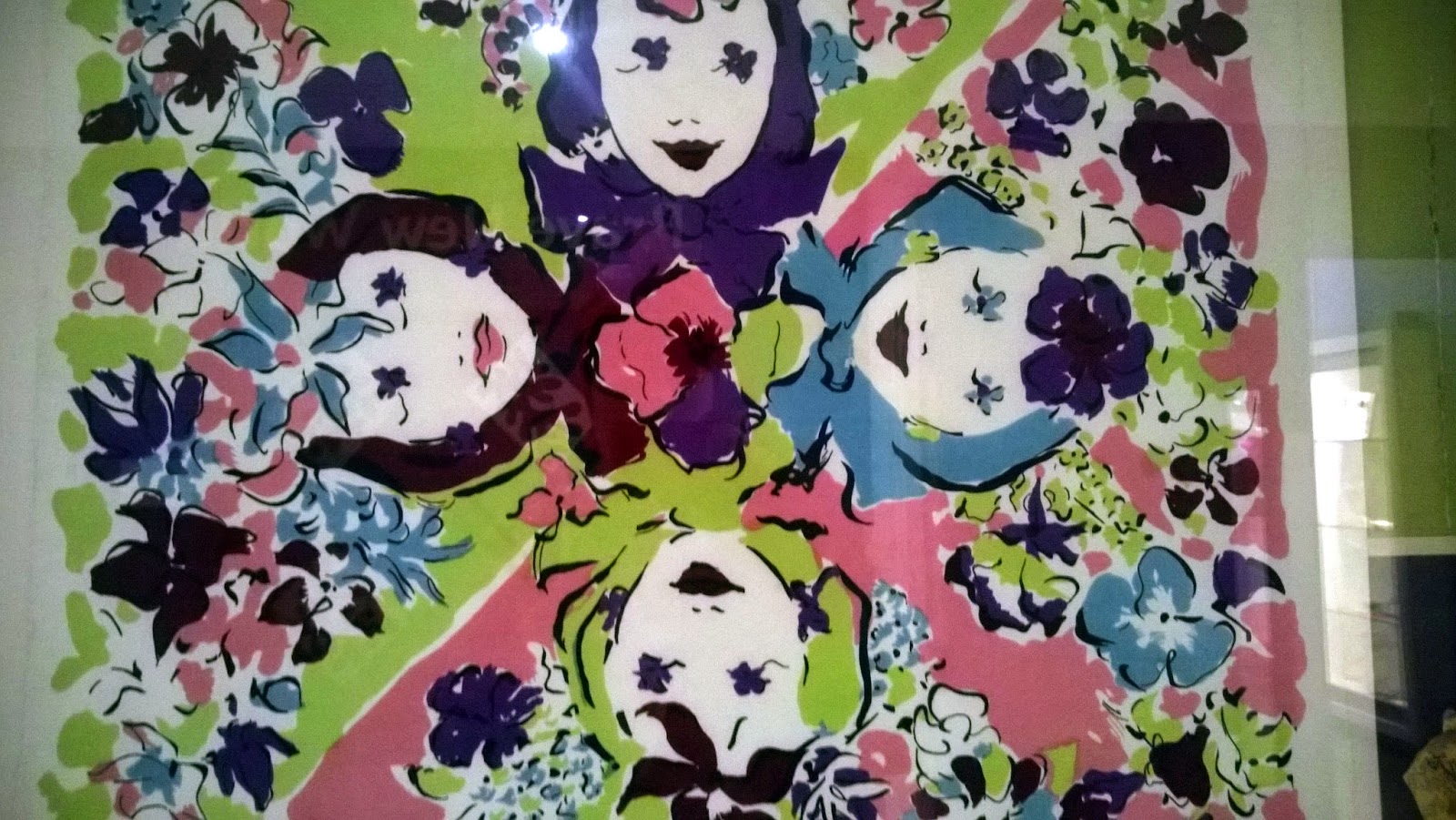 An artist who had rather more success as a textile designer than Picasso and Dali in my view was Andy Warhol. This is perhaps not surprising, as his better-known paintings and screen prints were practically textile designs, produced on a large scale in multiple colourways using popular subject matter. Textile design is perhaps the perfect medium for Warhol's art for mass public consumption. And his designs are simply fun; gloriously 60s colour schemed ice cream sundaes, tumbling watermelons and apples, bugs and butterflies flying all over skirts, trapeze artists leaping over horses; his designs have me wishing textile prints were this whimsical today! They certainly illustrate that the simplest idea is often the best, when executed well. Food for thought for me, if you'll pardon the dreadful pun. 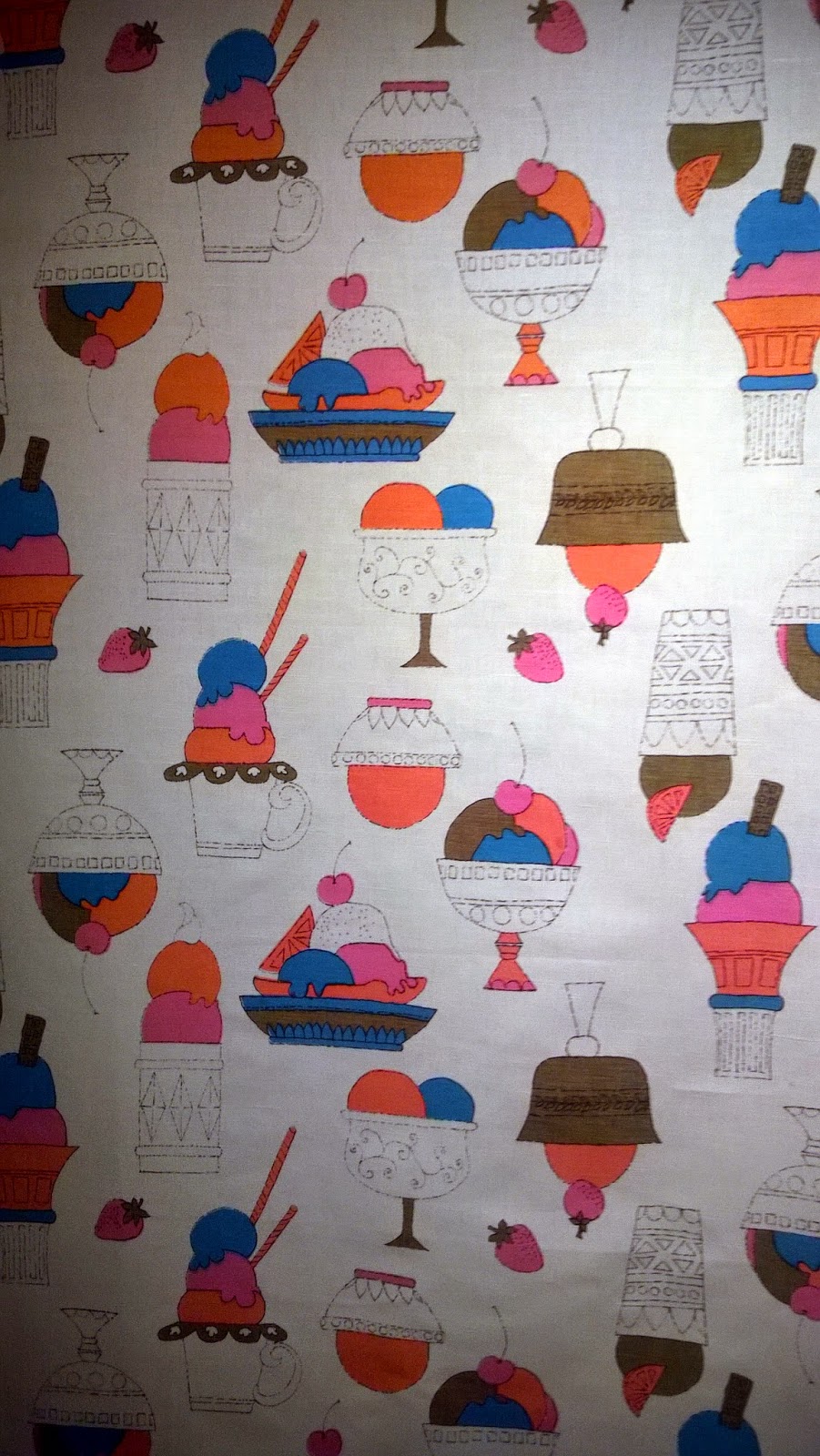 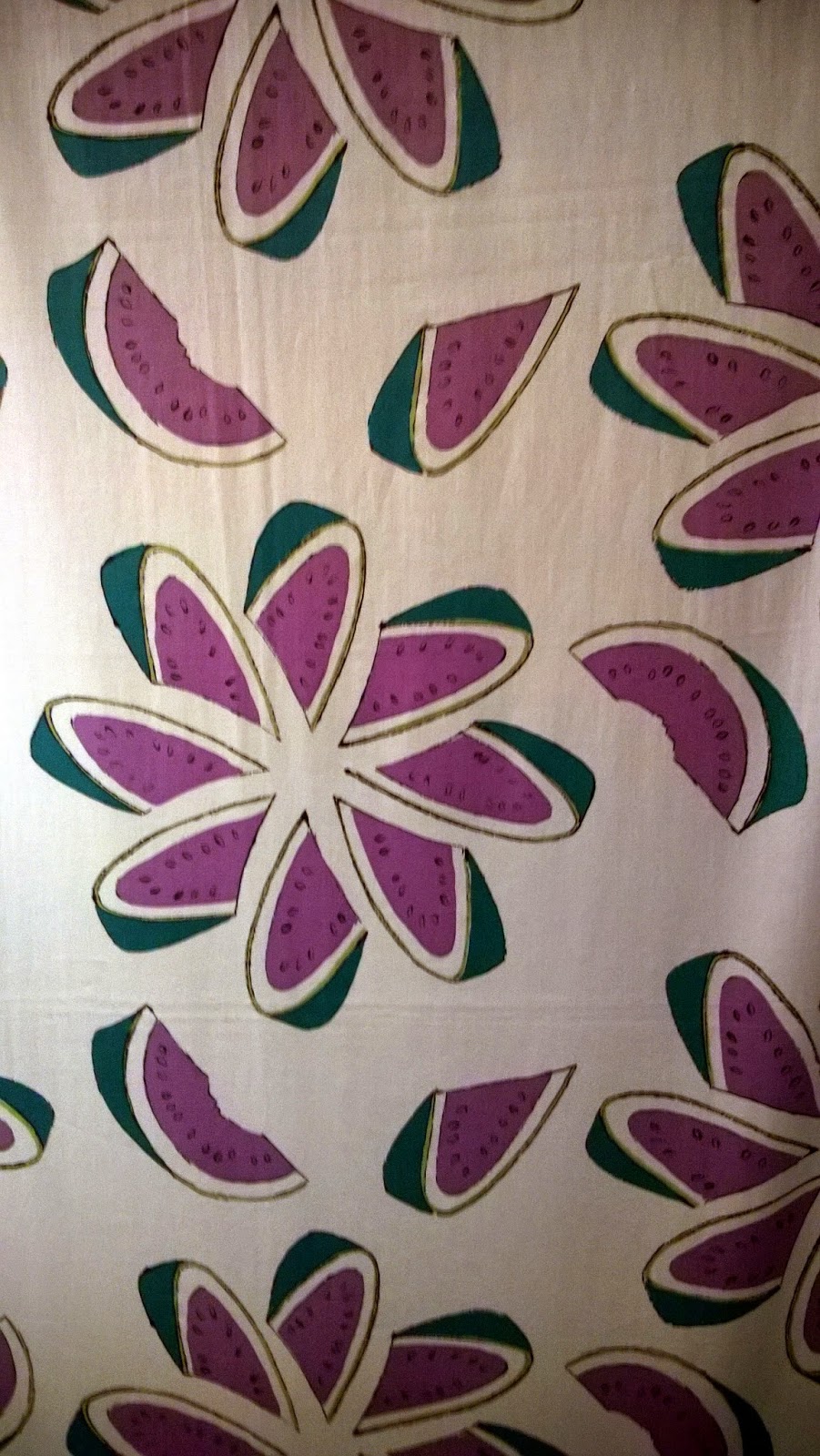 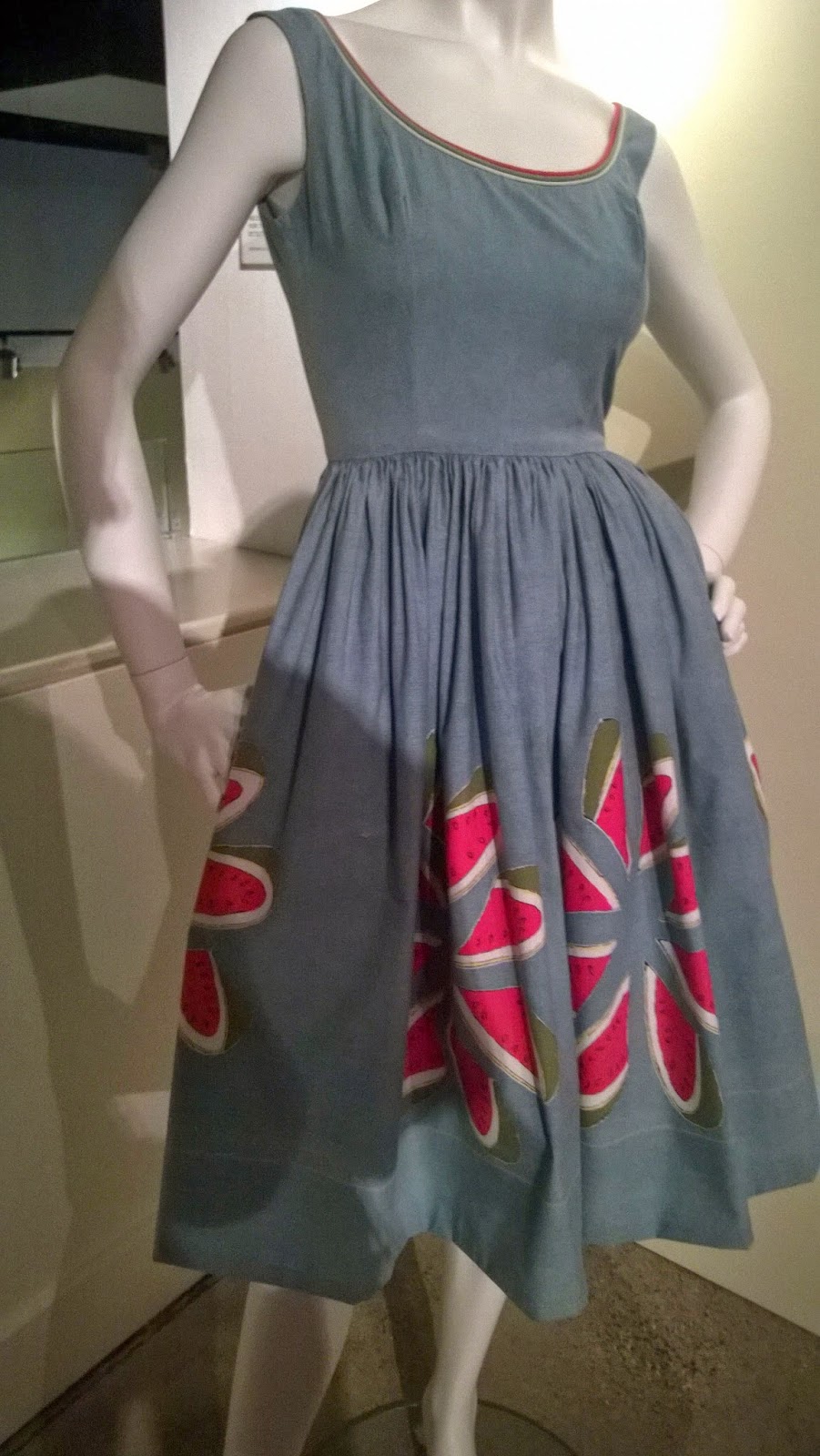 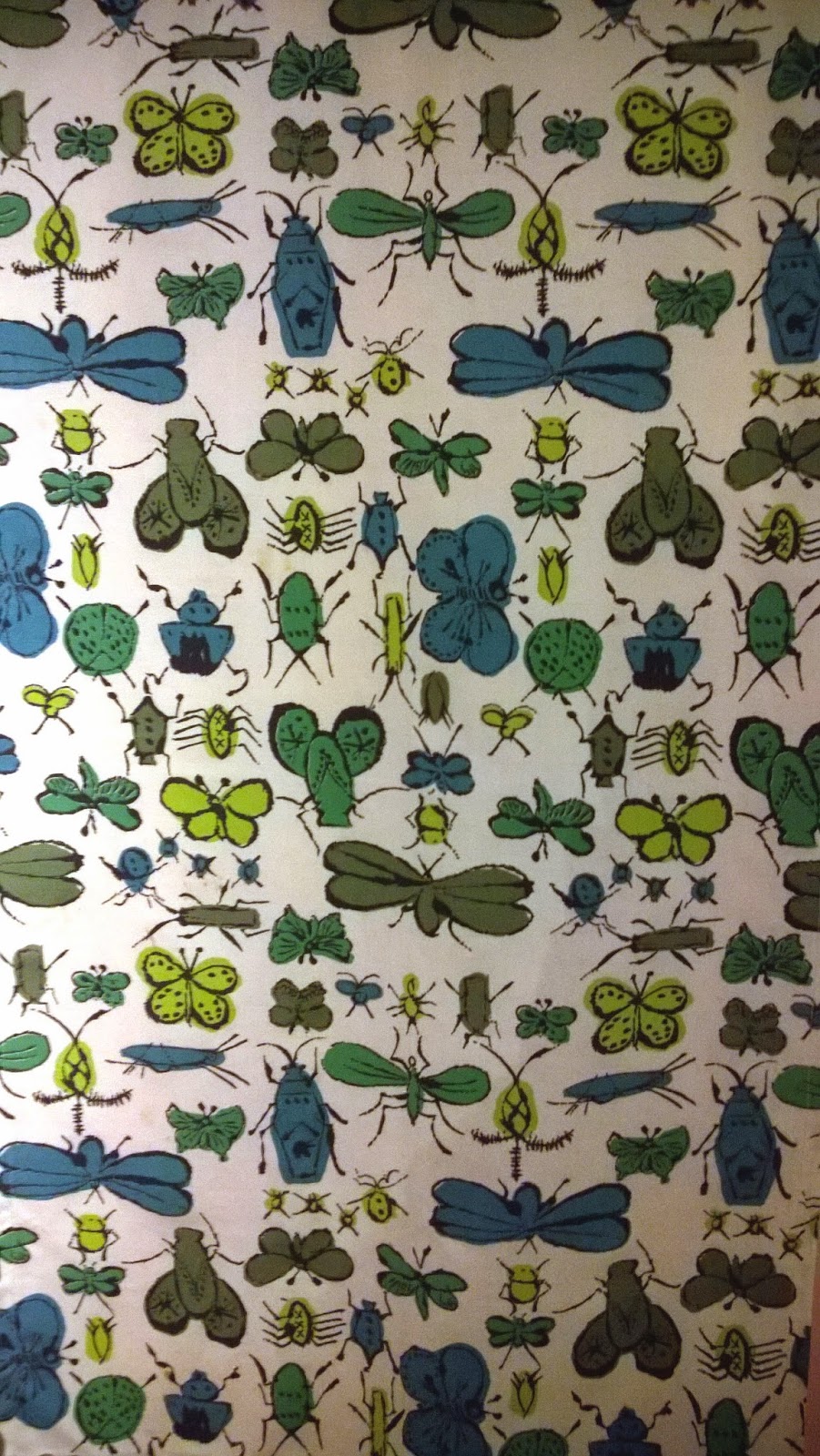 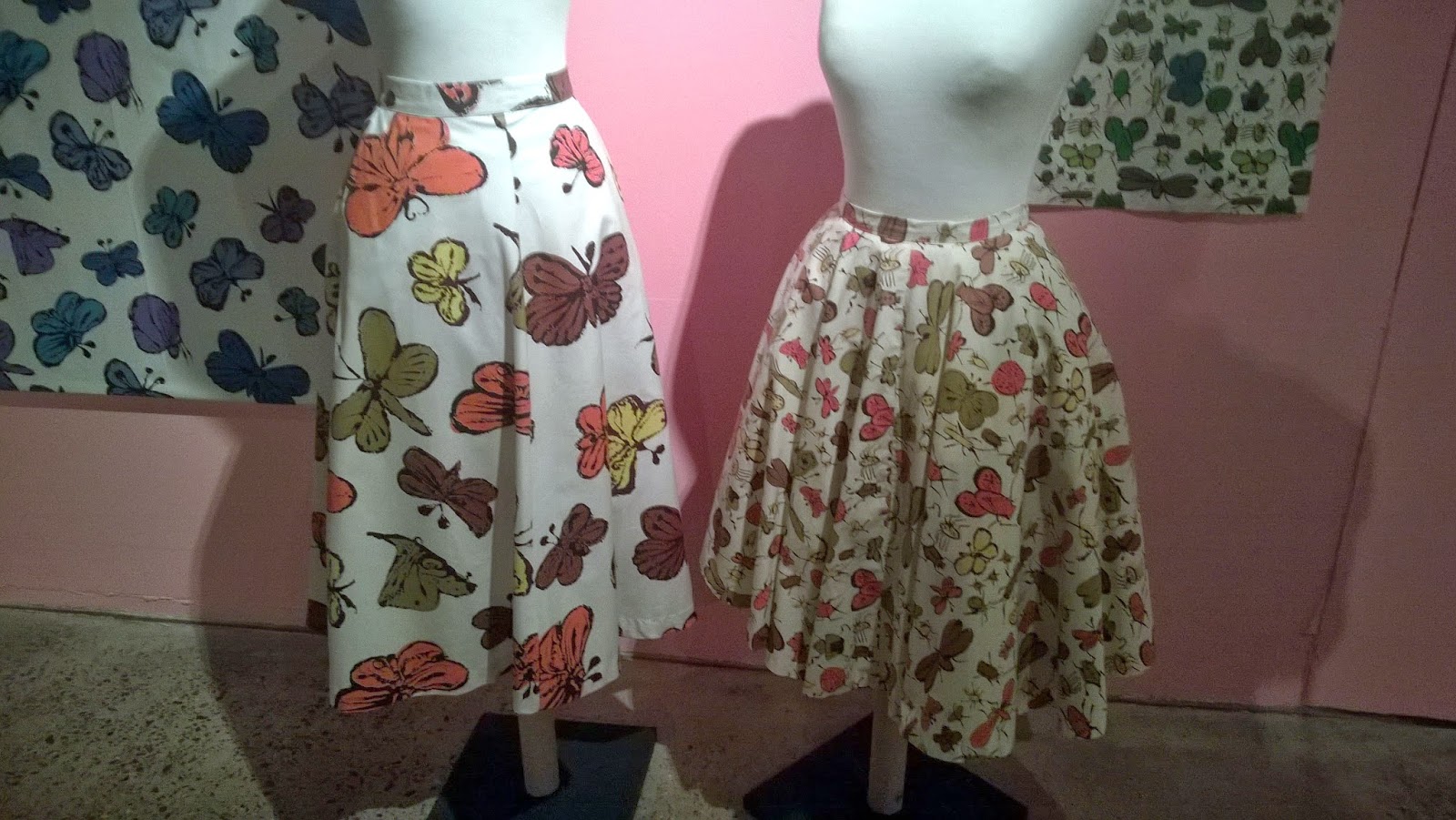 Zandra Rhodes founded the Fashion and Textile Museum in 2003, and so it's fitting that some of her textiles designs are featured in the exhibition, though not merely because of this fact; it would be an oversight to leave Zandra Rhodes out of an exhibition of printed textiles. Rhodes's dress which features in Artists' Textiles was the exhibit that put the biggest smile on my face; a classic late '60s/early '70s Peter Pan collar shift, with a difference; the torso is printed with a luscious pair of lips being touched with a line of lipsticks fanning out into a hand. I considered slipping this little number into my bag for maybe a moment or two. 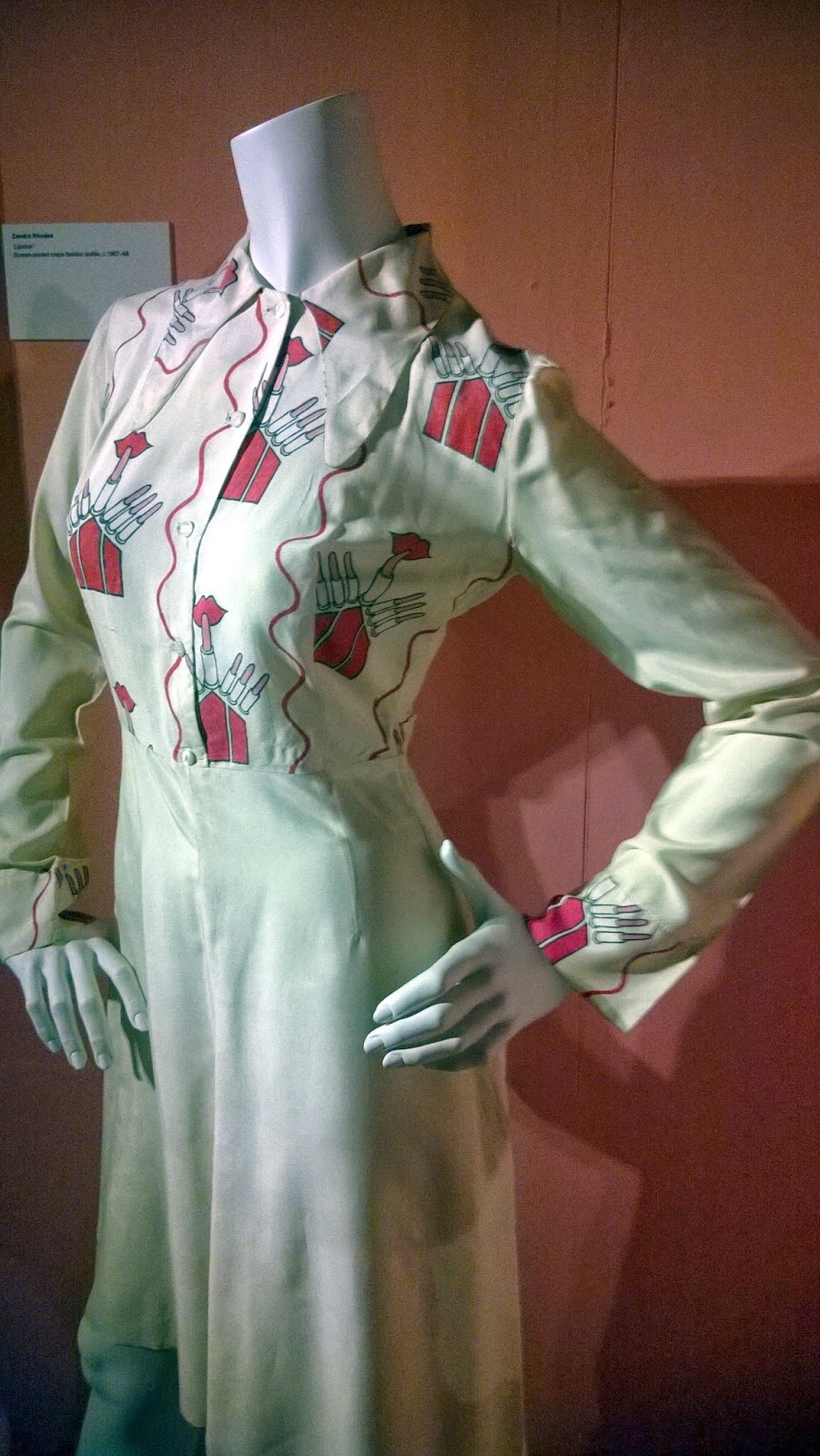 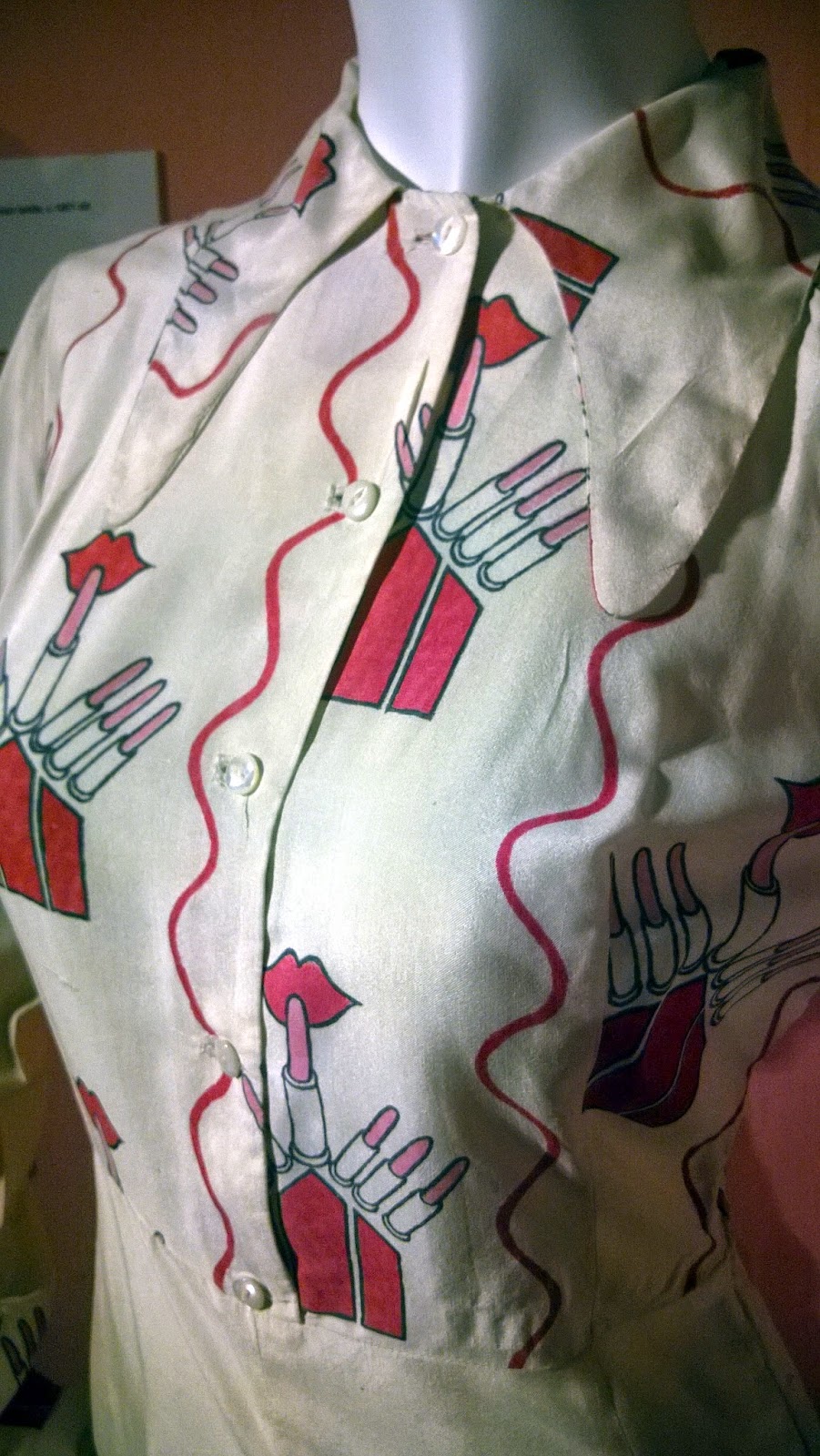 In the 1950s, the label Horrocks was synonymous with the English summer frock; the dress for an English Rose. Horrocks's success was partially due to their commissioning the painters Alastair Morton and Graham Sutherland to supply textile designs for the company, which were then turned in gowns by the couturier John Tullis. Clients even included the Queen, but the dresses were affordable for the woman in the street, too. Unfortunately the same isn't true of these beauties today, much to my dismay. 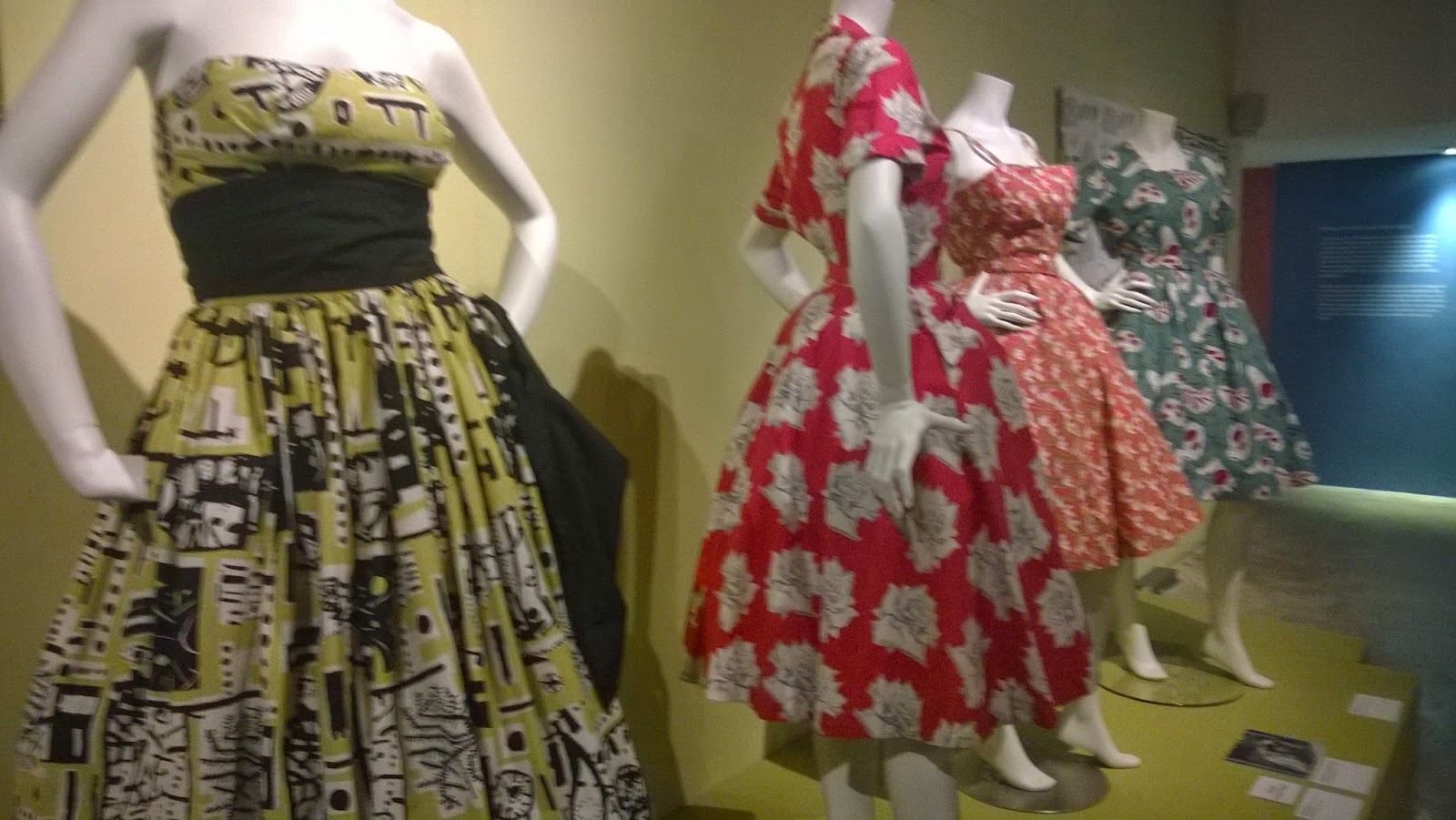 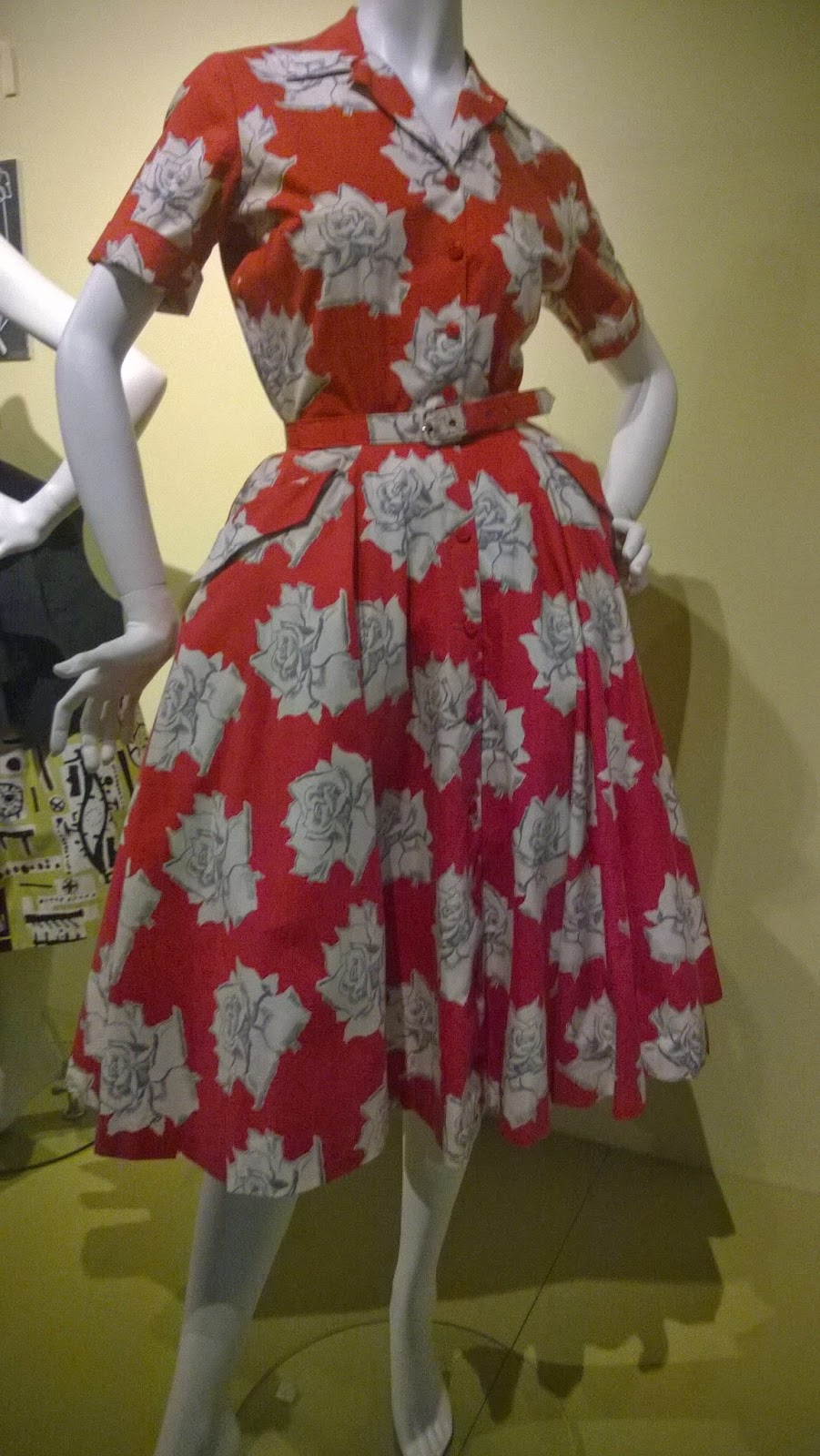 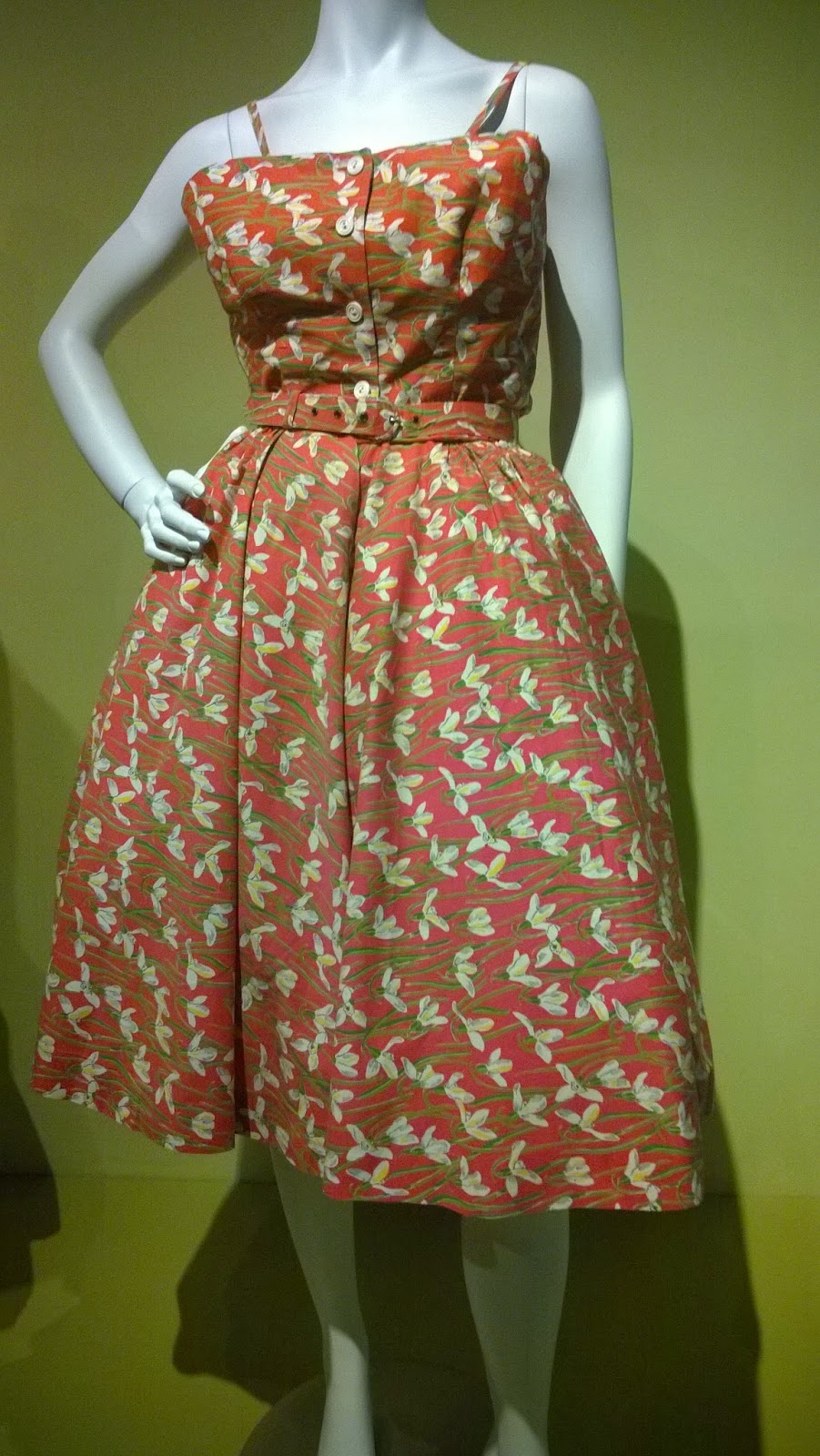 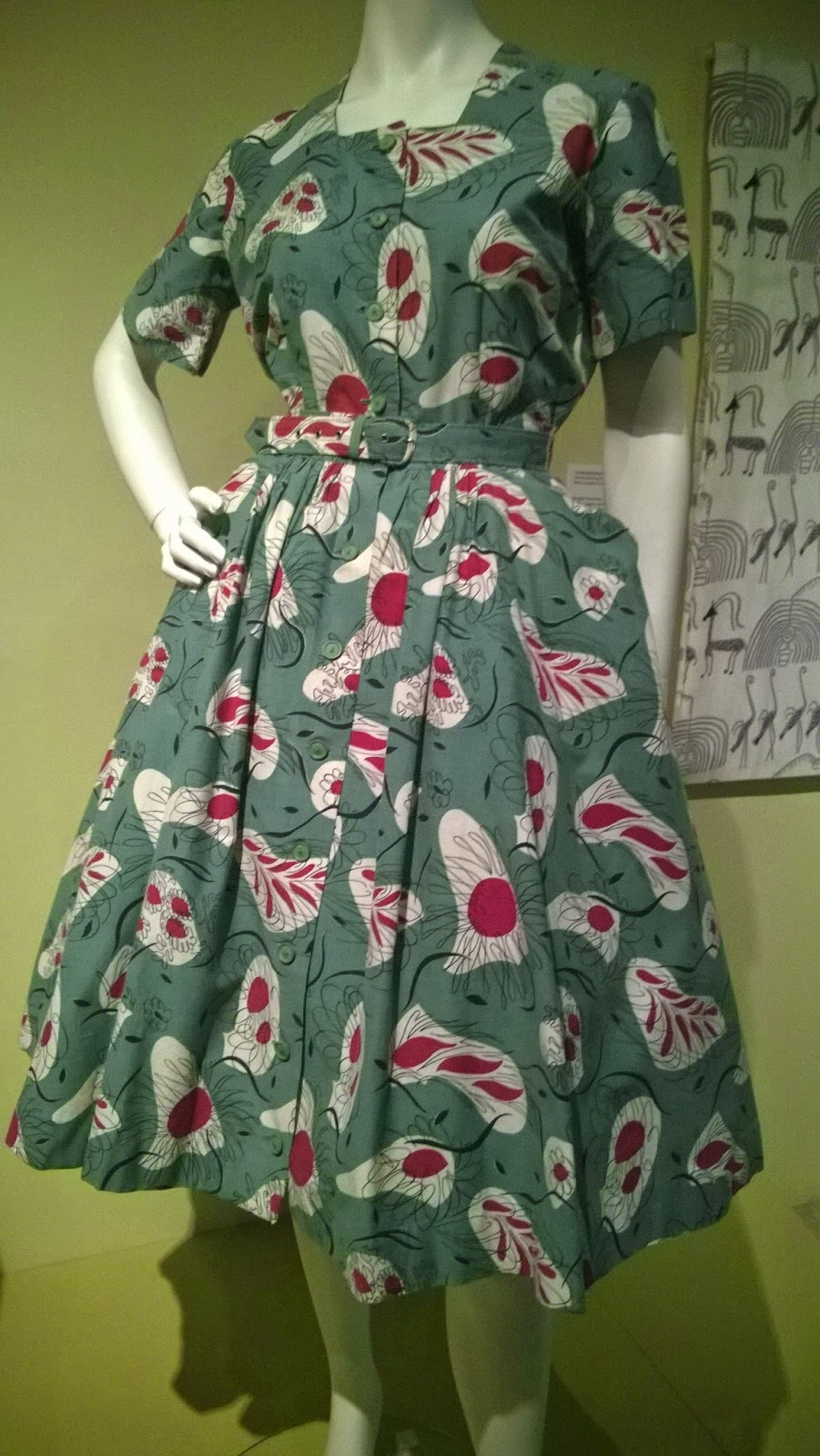 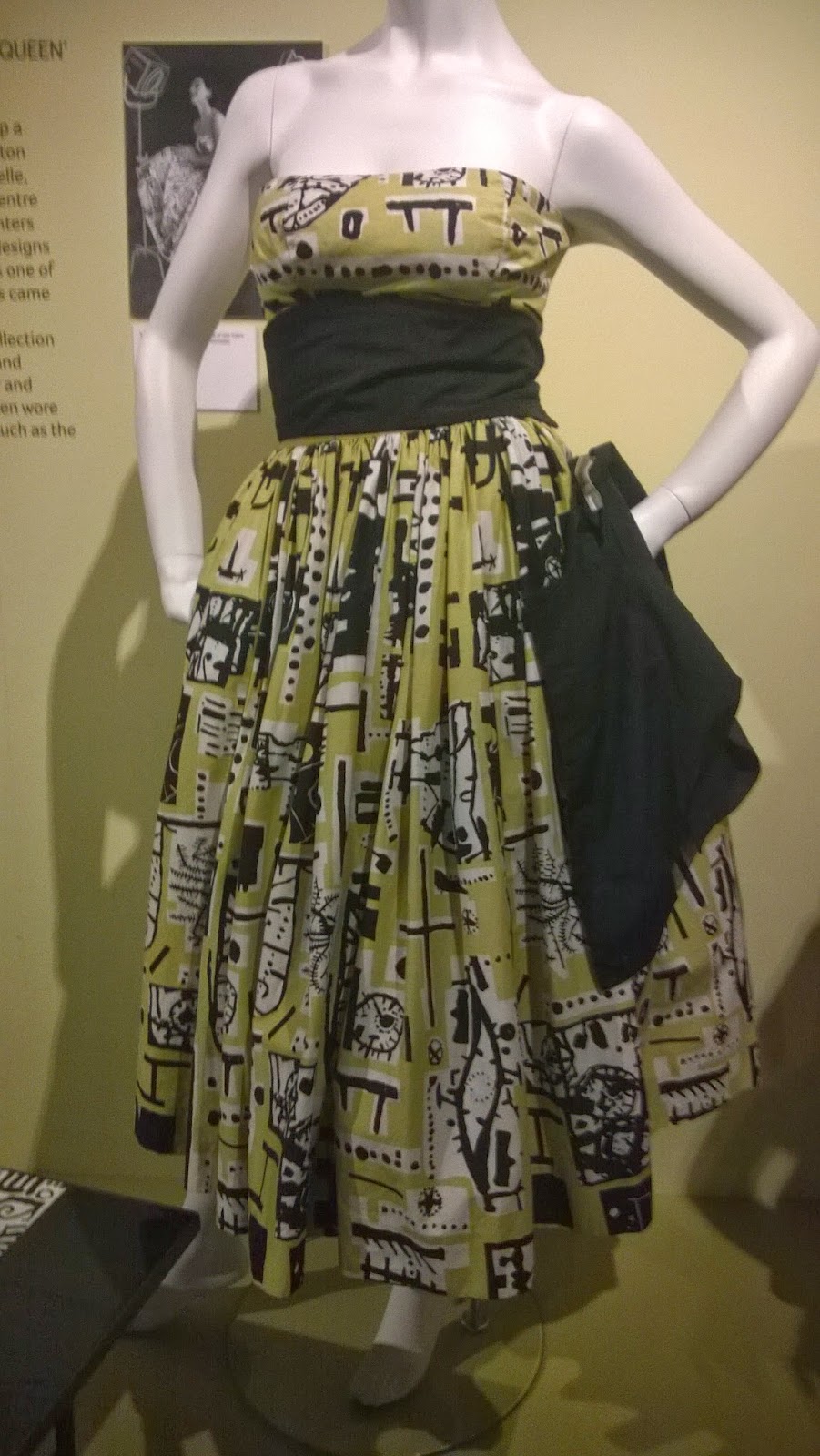 I felt the piece that made the best use of the repeat quality of print was a textile featuring hundreds of gossips spreading salacious secrets by Virginia Lee Burton. A simple but witty pattern that really explores the possibilities of print. And that's what I intend to do come summertime. 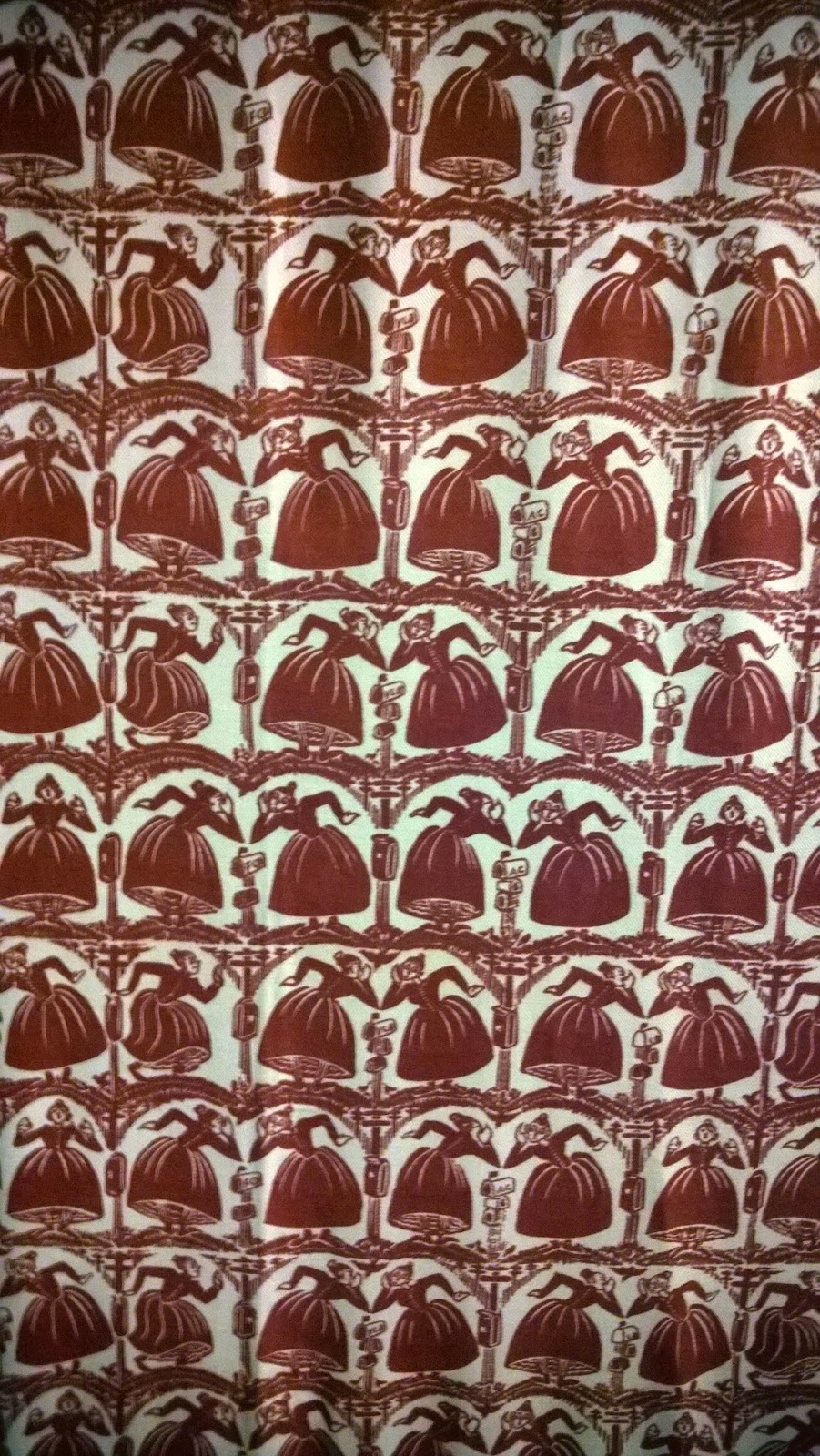 Posted by Kate Elisabeth Rolison at 13:48 No comments:

If you know me, you'll know I'm fond of a frock (or seven). My room is currently groaning under the weight of 60s dresses, and the surplus has started seeping out into other rooms too. But when it comes to dresses, I firmly don't believe in too much of a good thing. Particularly when it comes to the gorgeous details of my two most recent acquisitions.

Both are not only lovingly hand-crafted, but also feature illustrations by the designers themselves. 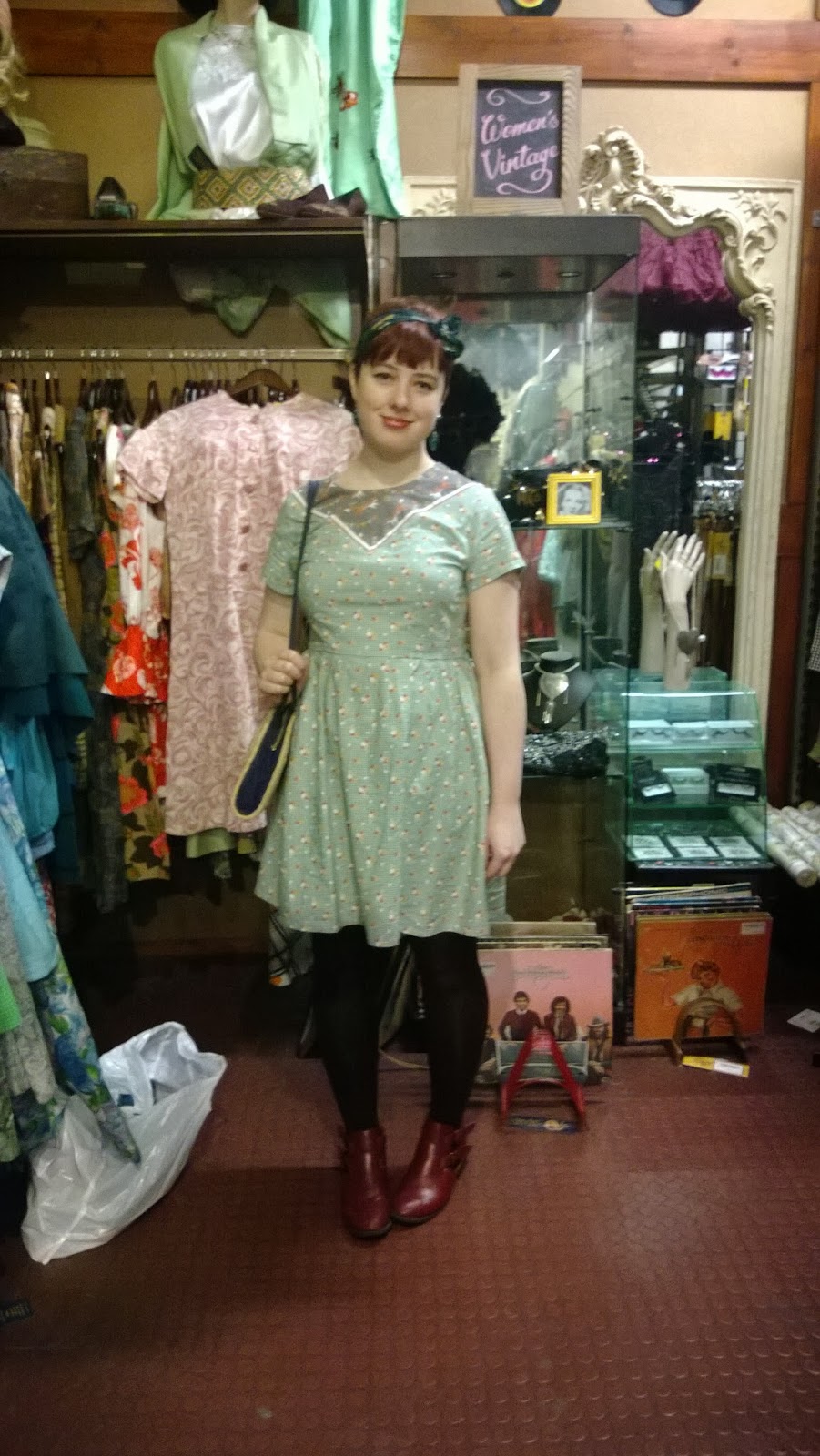 First up is a delightfully atomic-era-esque number by Supayana. I've followed Supayana(aka Yana Gorbulsky)'s work ever since my teens, when I had misguided dreams of becoming an indie fashion designer. Back in the day, Yana spliced and recycled cute thrifted tops to make her own creations. Her green fashion credentials continue to this day, when she makes use of old and unwanted vintage fabrics, and eco-friendly materials in her designs. Her pieces are now much more refined and elegant than they were at the beginning of her career, when the mishmash of her designs could be said to be an acquired taste (it's certainly one I like, though!) 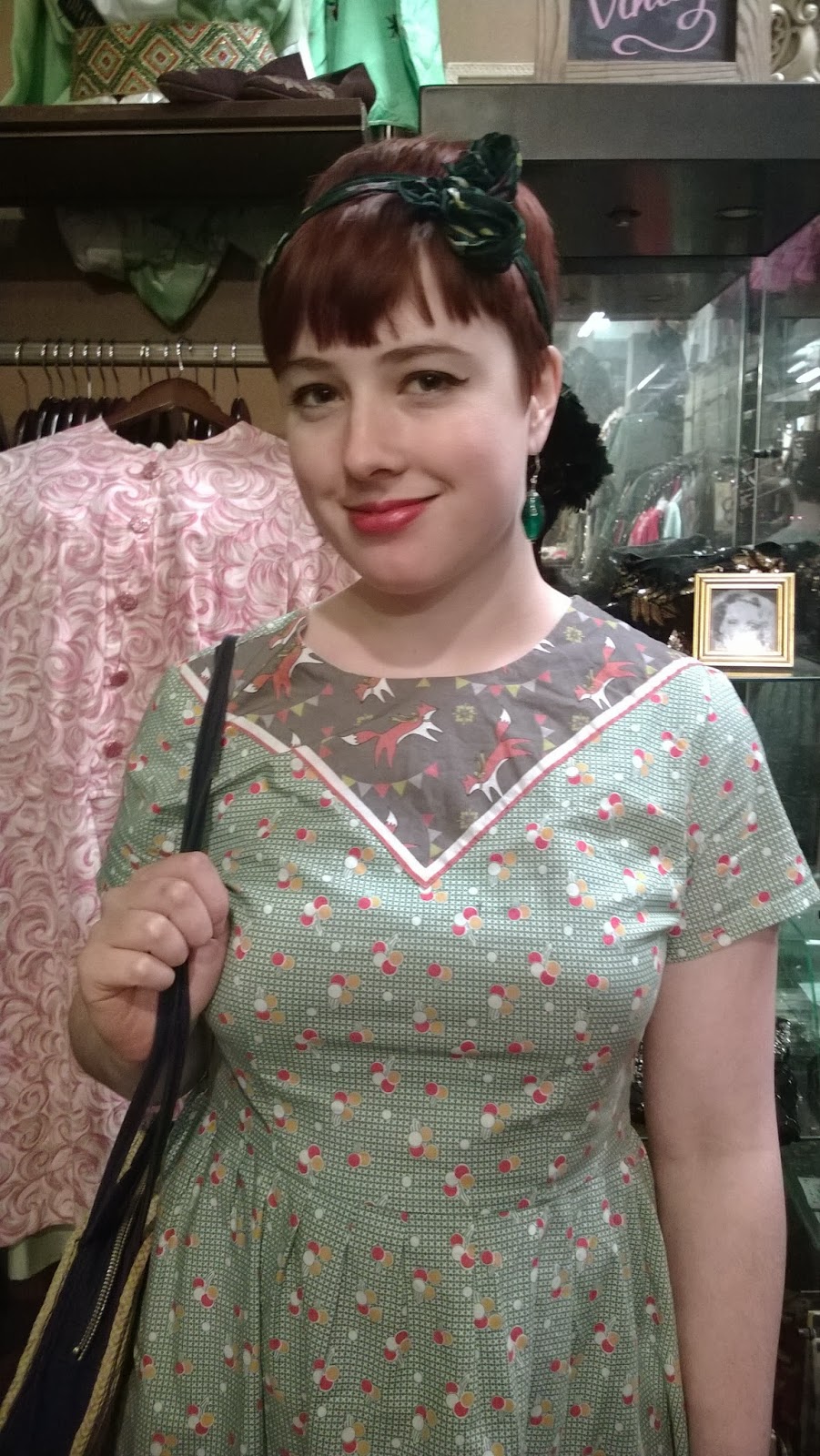 I've followed Caitlin Shearer's work since my teens too (though I suspect initially that had something to do with us both being mildly obsessed with Patrick Wolf!) Over the years I've seen Caitlin's paintings and illustrations mature into an utterly idiosyncratic and instantly recognisable dreamy aesthetic, echoed in her gorgeous Instagram snaps of bouquets of flowers and her own enviable collection of mid-century dresses. If you've never encountered Caitlin Shearer's work before, I urge you to go check out her Etsy shop. Go now.

In 2012, Caitlin began to introduce a line of dresses and textiles illustrated with her original watercolour paintings to her Etsy shop. A delectably tempting plethora of sweet, slightly puff-sleeved, 50s inspired sundresses are available, with illustrations ranging from pastel biscuits to girl scout badges. The Mermaid dress, however, is the one I've had my eye on since then, and after many months of saving pennies, it recently landed in my letter box.

It's even more dreamy in person; though perhaps a little risqué to wear to School! These mermaids are certainly sirens. 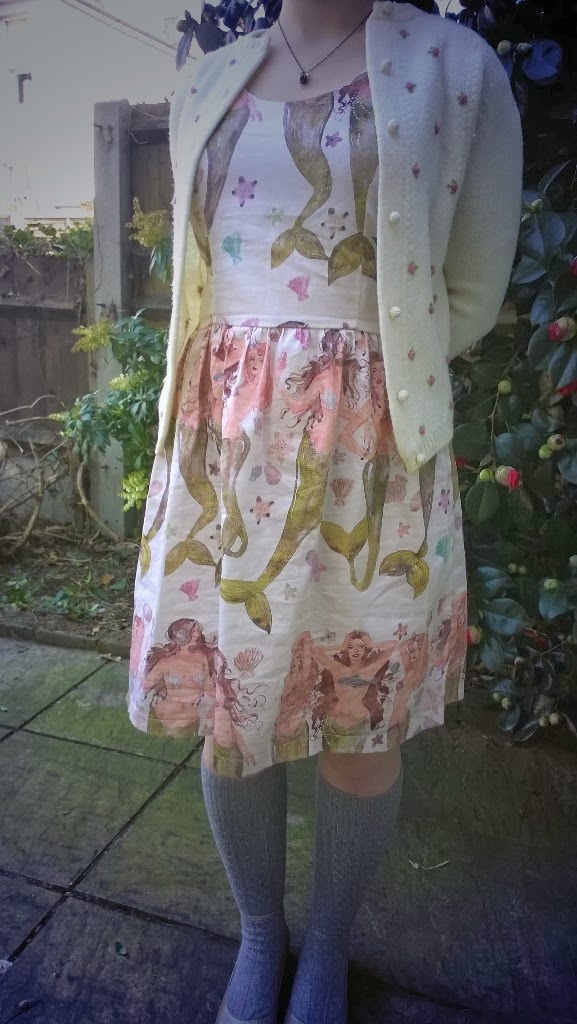 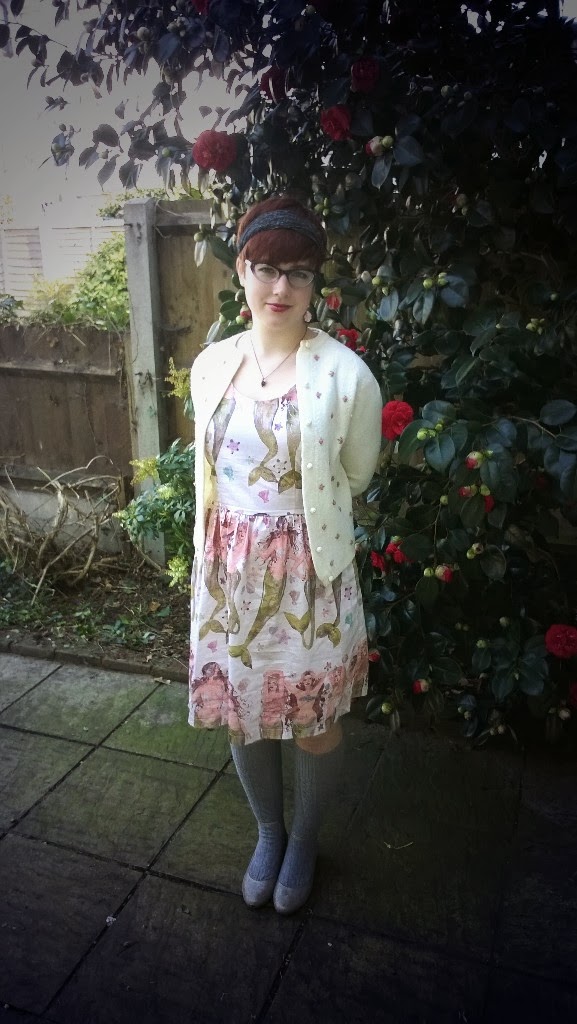 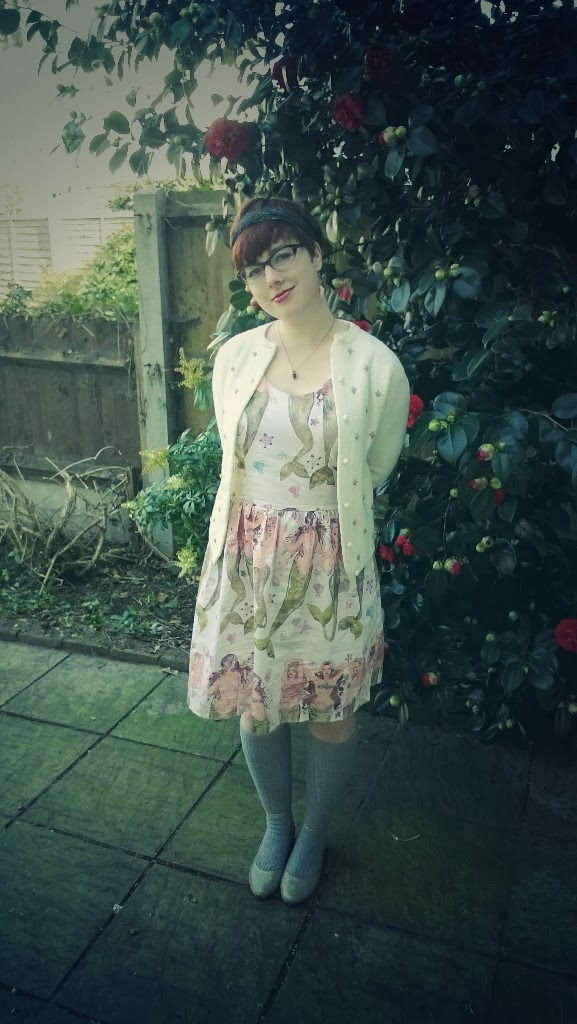 Both these dresses are perfect for the sudden Spring weather we're having (I spent my lunchtime today on a picnic blanket in the gardens of Hampton Court Palace, soaking up the sunshine). I'm certainly feeling much sunnier, too.
Posted by Kate Elisabeth Rolison at 12:58 No comments: