No, not the product of a boozy stitchery sesh I'm afraid, rather my  Highland frolics in pictures (although I am currently working on a slightly ambitious piece which will be revealed in the near future... or whenever I finish it, it is quite labour intensive and I start my new internship on Wednesday!)

So, last Sunday Pip arrived and we did things such as climb the local mountain and swim in the (not particularly warm) river, which was filled with young trout.

J.G. Mallard came with us and caught some rays by the pond (it was so hot I even incurred some sunburn!)

Sans duck, we took a trip to Tobermory, scene of faintly unsettling British childrens' television program Balamory, ate posh chips, and discovered an honesty shop which was filled to the rafters with Mills & Boons. This proved to be most convenient, as the photograph below demonstrates:

The final night was spent sippin' homemade alcoholic concoctions... sloe gin for me, potent French apple brandy for Pip. I indulged in some sneaky stitchery of the aforementioned soon-to-be-revealed piece, too. 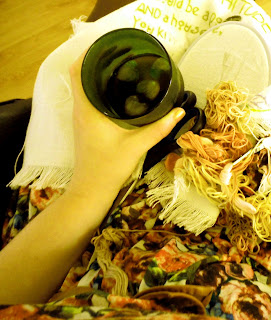 In fact, we managed to get through a nigh-on obscene amount of booze  during our three weeks in Branault... in the two weeks before Pip arrived, my parents and I seemingly drank seventeen bottles of  wine... definitely time to switch into life post-uni, methinks!

Posted by Kate Elisabeth Rolison at 15:46