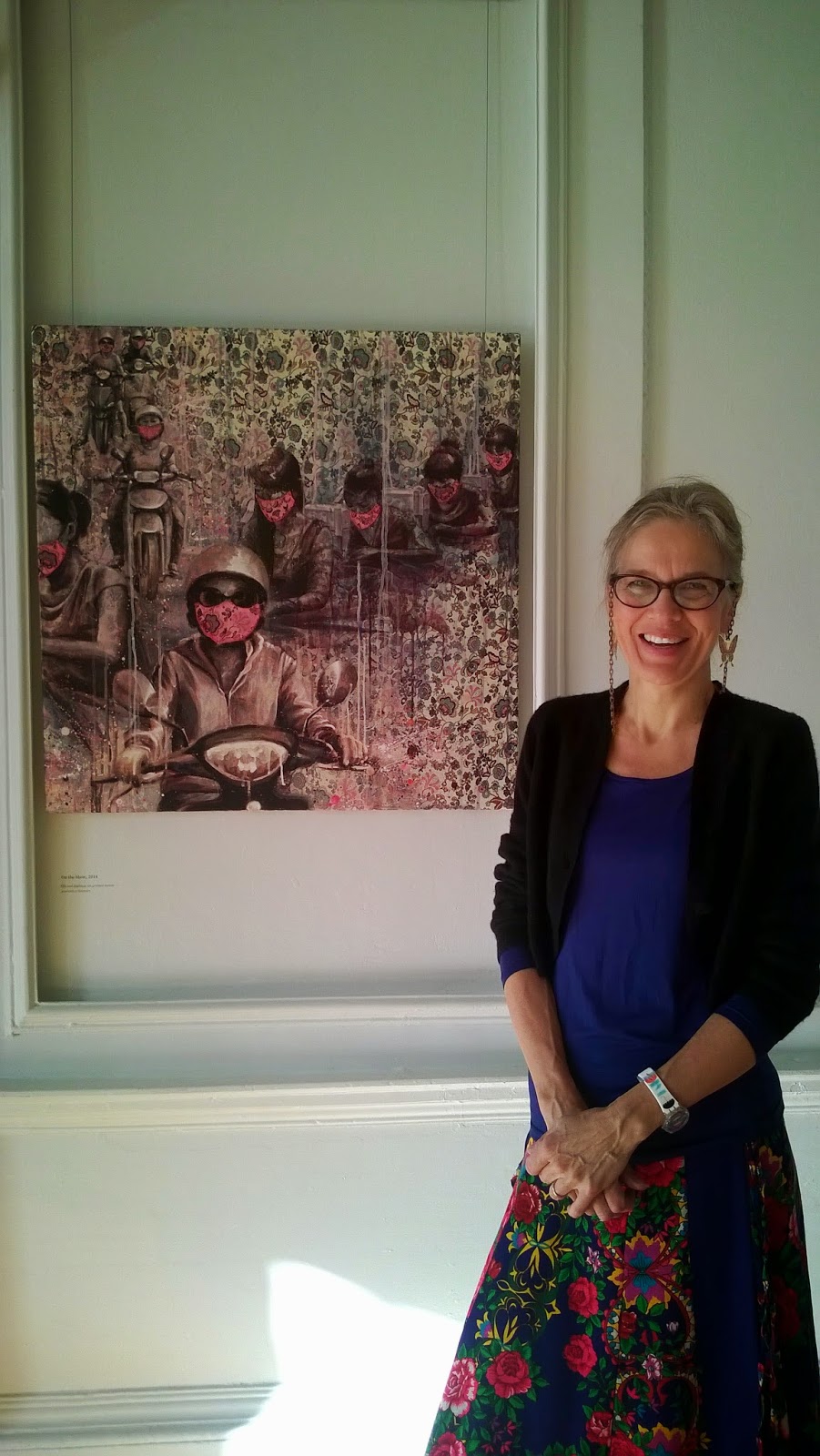 The William Morris Gallery is very canny at showing contemporary artists whose output would have been looked upon most favourably by Morris himself. None more so than the latest exhibition by Alke Schmidt, Tangled Yarns. If Morris was alive today I'm sure he would have felt as passionately about Alke's call for social justice through her exposure of the murky world of the textile industry as about her highly skilled handicraft.

Alke plays up this dichotomy between Morris the socialist and Morris the designer in her exhibition. One of the first works which the audience is confronted with as they ascend the stairs to the main exhibition space is entitled Morris's Dilemma. "Confronted" is perhaps an apt word; rising like steam from the two arms of a mill engine, Morris's Honeysuckle and Tulip pattern, repeated on a grand scale, weaves like a mirage in and out of the engine painted over it. I'm not sure whether the work should be classified as a painting or as a collaboration with a bygone craftsman. It could easily be an assault on the senses, but Alke blends pattern and painting so seamlessly, confronting Morris's romantic longing for a pre-industrial, hand-crafted age with the means of production that made his career possible. 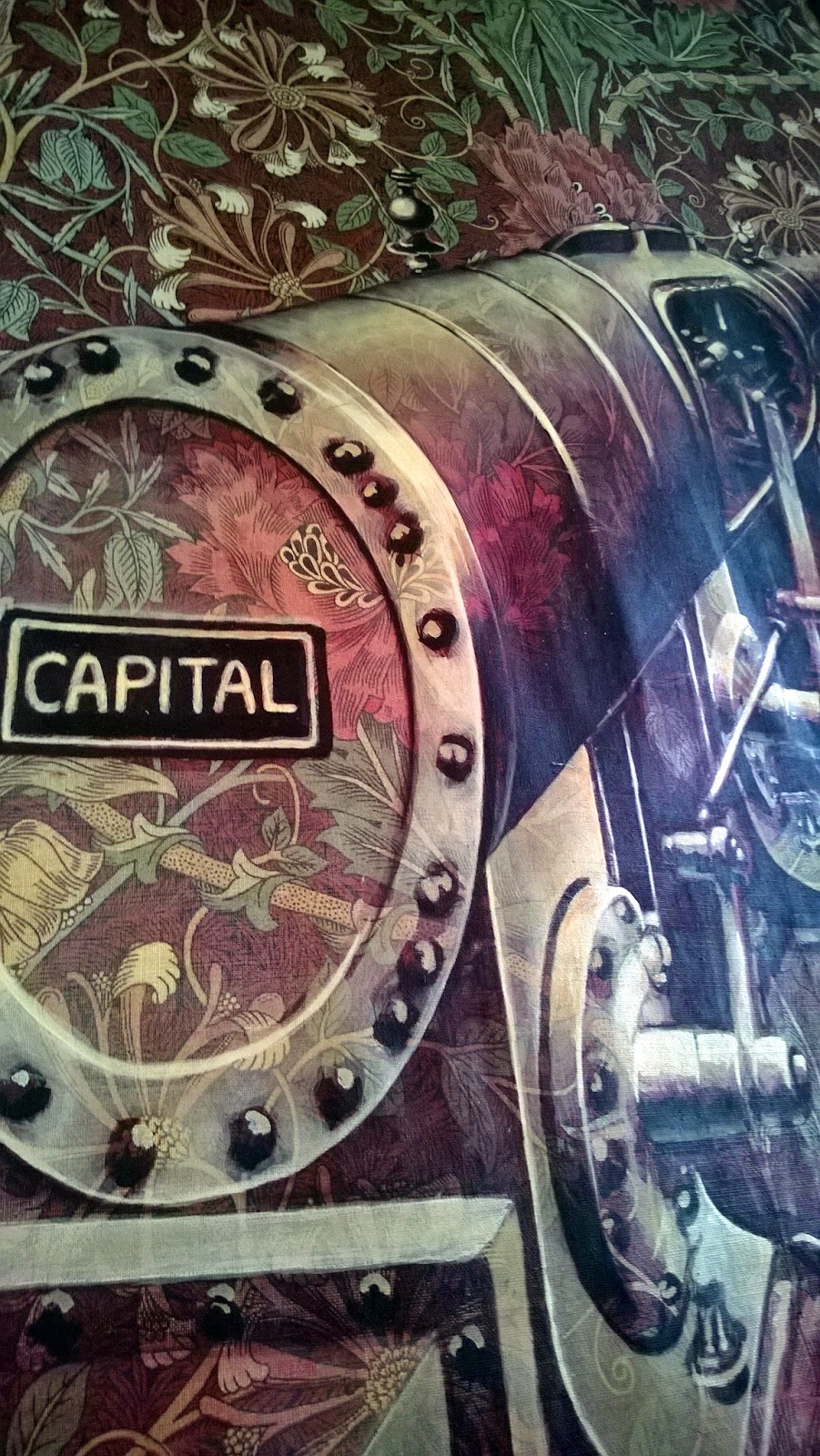 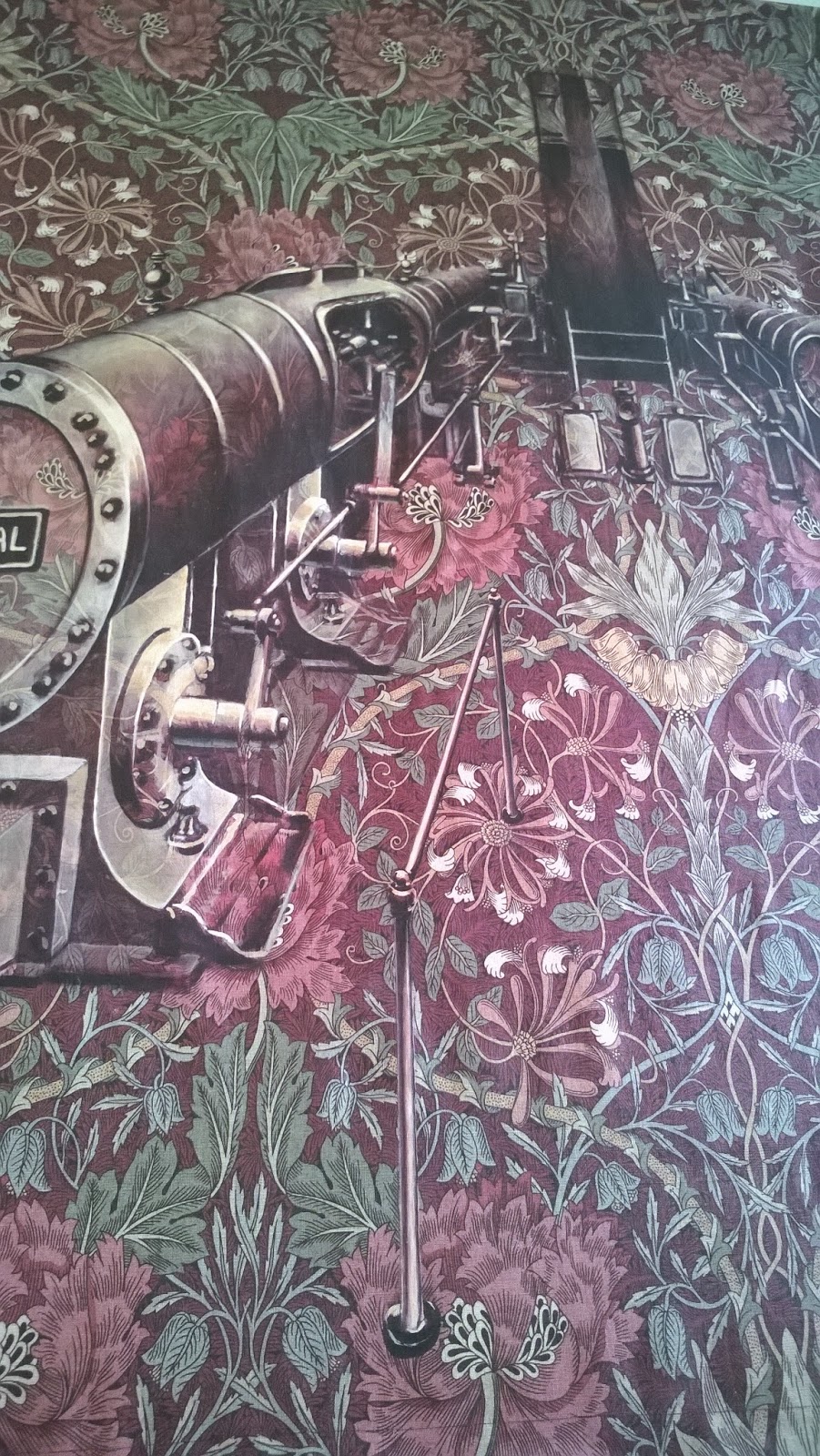 One cylinder of the mill engine is entitled "CAPITAL"; the other, "LABOUR". On Alke's blog we learn that this is not her own invention intended to "illustrate the complex and conflicted relationship between Morris the entrepreneur-designer and Morris the socialist", but an unbelievably fortuitous discovery on her part; such an Orwellian mill engine may genuinely have existed. At the very least, it did as a Victorian illustration.

The composition and colouring of Alke's piece is redolent of both right and left wing propaganda for me, but particularly trade union, socialist, and suffrage banners. 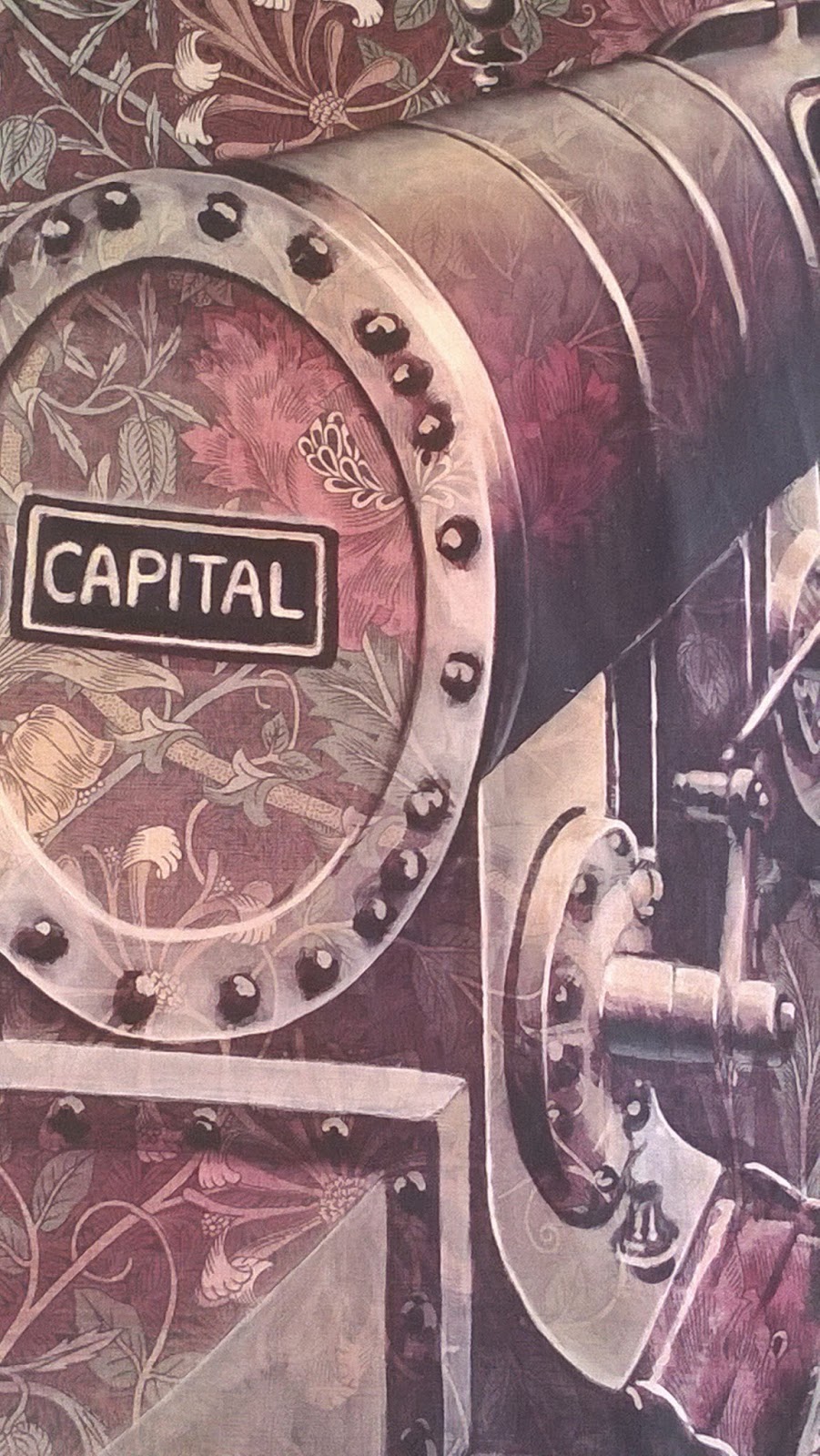 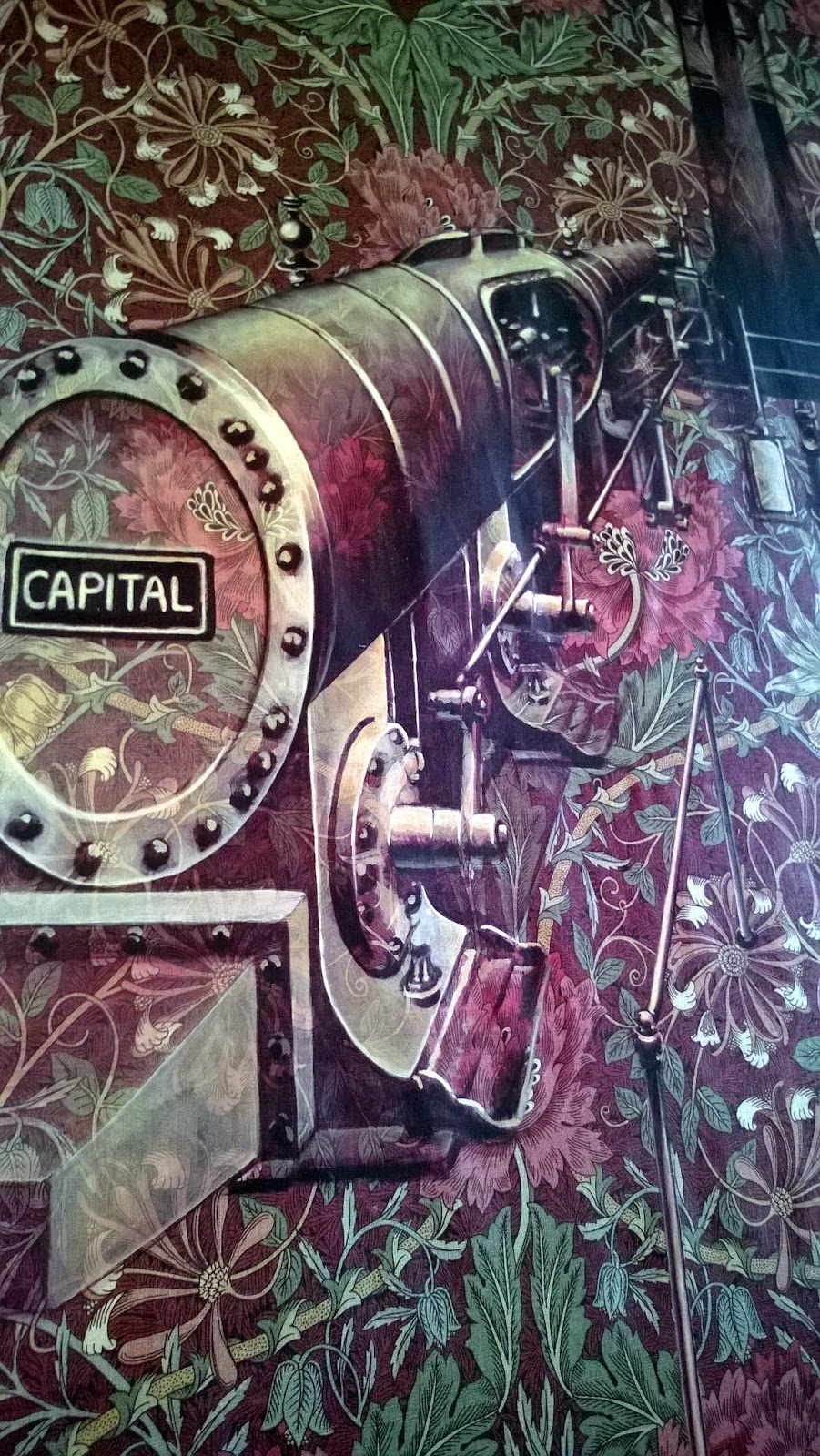 In the very last piece completed for Tangled Yarns, Alke pays direct homage to these suffrage banners, appliquéing an early 20th century patchwork (which would have been a "contemporary" of the Suffragettes) with the Suffragette rallying cry and banner proclamation Deeds Not Words.

Though the work harks back to the 1900s and the suffrage movement, and is in part a collaboration with a needlewoman of the past, it feels decidedly modern. It could be the jumble of colours, which are warm, inviting, even cosy; in marked contrast to the rest of the exhibition there is a sense of the handcrafted here that is perhaps not entirely polished; this is highlighted by the unfinished, raw edges of the patchwork. Alke posits on her blog that the woman who created the patchwork may have been a professional machinist making this piece at home for personal pleasure; she was certainly a skilled stitcher. 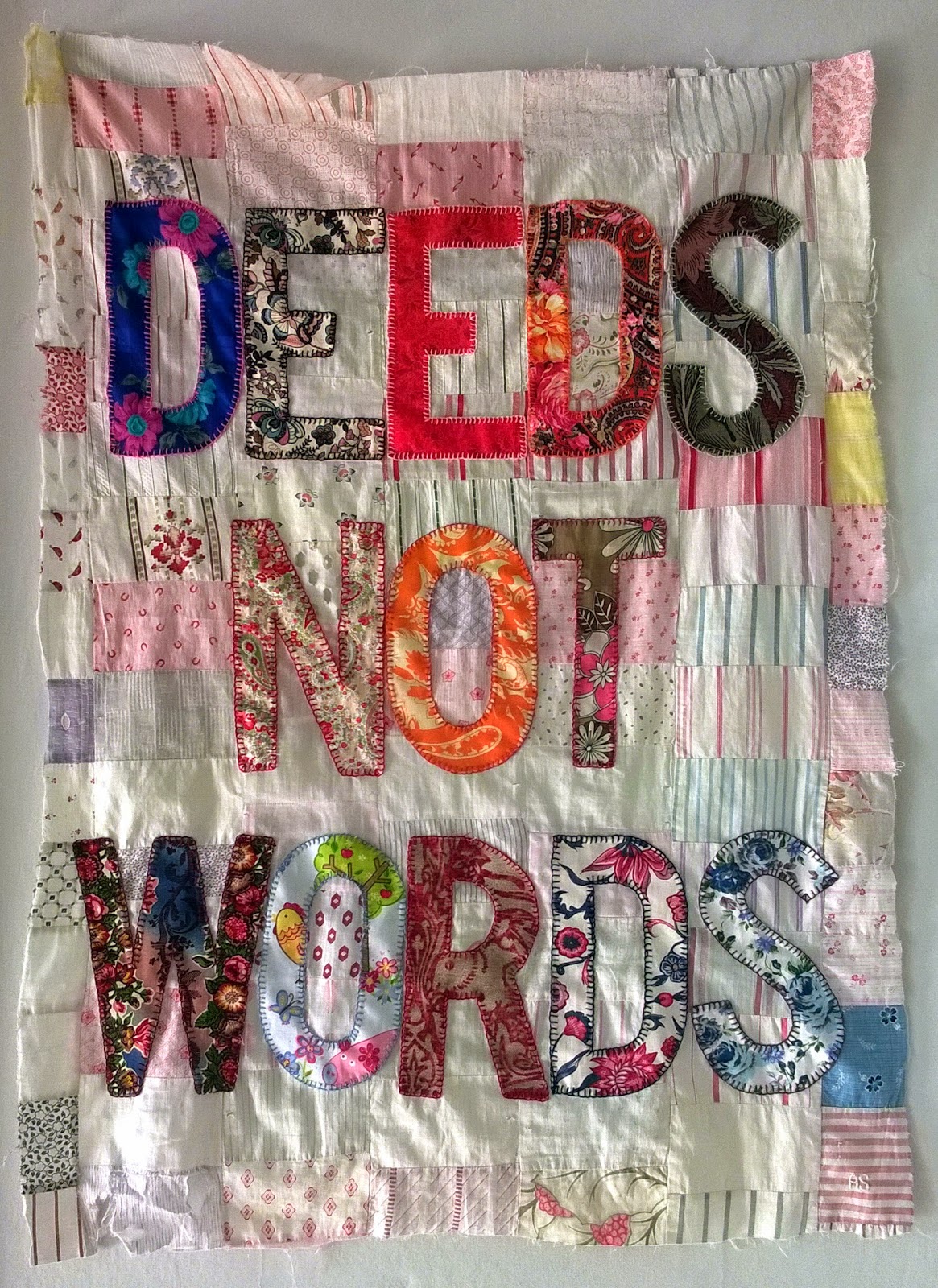 Alke's choice to leave the patchwork unfinished signifies the never-ending nature of "women's work", and lends the piece a vulnerable air. The domestic furnishing and dressmaking cottons used for the lettering, the shirting stripes of the patchwork, show that craft is for everyone, and can be (and certainly was in the past) a part of everyday life. Just as Morris would have wanted.

The phrase which keeps repeating in my head as I look at this work is the old rallying cry of Second-wave feminism, "The Personal Is Political". Its execution puts me in mind of Craftivism, as does its simple, yet impactful and perennial message. It has readopted the Suffragette call to arms, but divorced it from its austerity. As with the campaigns of the Craftivist Collective, "unlike some of the more traditional, extrovert forms of activism", Deeds Not Words is quietly beautiful.

Alke created her text from fabrics used in the other works in the exhibition - thereby tying up the loose ends of her Tangled Yarns. A fitting conclusion to Alke's exhibition, calling us to bring about real change in the textile industry, whilst honouring the women who intersect with it.

A group of women whose lives were utterly transformed - for worse - by the textile industry were the victims of the Rana Plaza disaster in Bangladesh. Disaster makes it sound like an accident; textiles workers in the Rana Plaza building were literally told "If you die here, so be it. But you can't leave, get to work".

The building collapse is considered the deadliest structural failure in modern human history, leaving behind countless unanswered questions. Due to failures at every level, from highstreet brands whose clothes were manufactured in the building neglecting to take responsibility towards their workers, to local government turning a blind eye to the lack of planning permission, to managers at one of the factories in the building threatening to withhold a month's pay if workers refused to come to work following structural cracks appearing, 1138 (and counting) people have died. The majority of these workers were women, and a number of their children were also killed in the collapse.

Just writing these words makes me angry. It is incredible, therefore, that Alke has created such touching, peaceful, and appropriate memorials to these women in her exhibition, restoring them the dignity that they were so brutally robbed of. 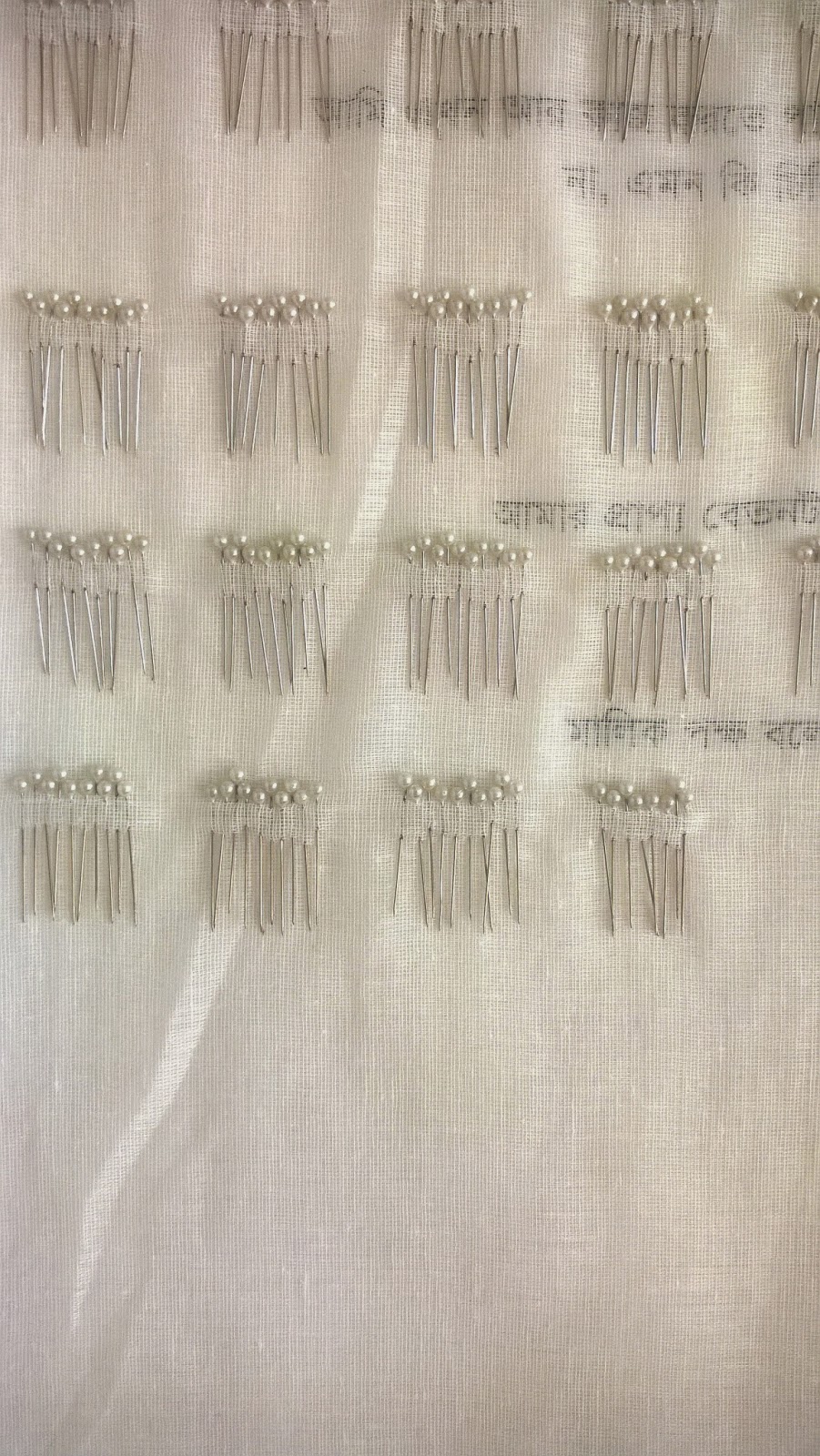 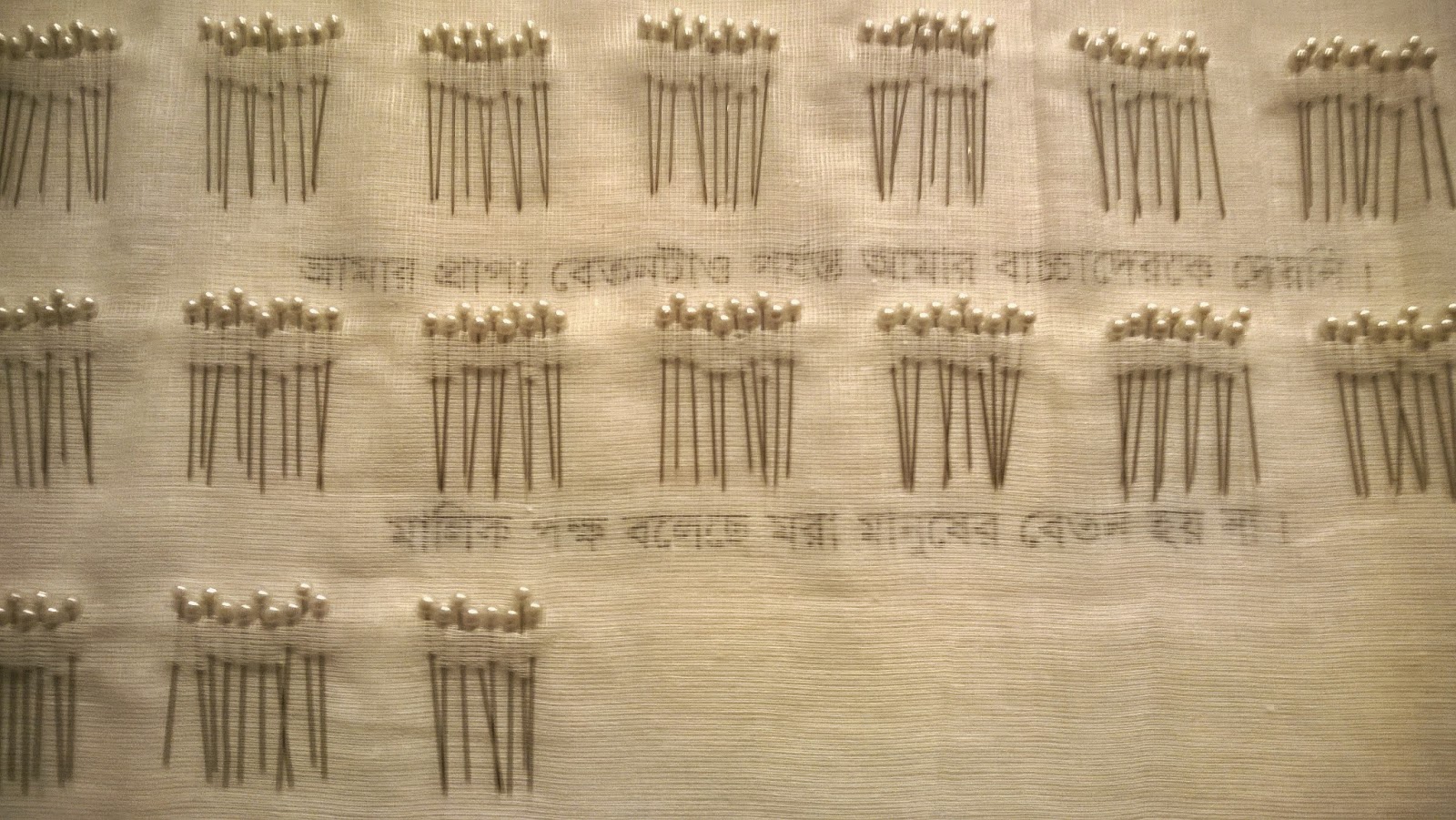 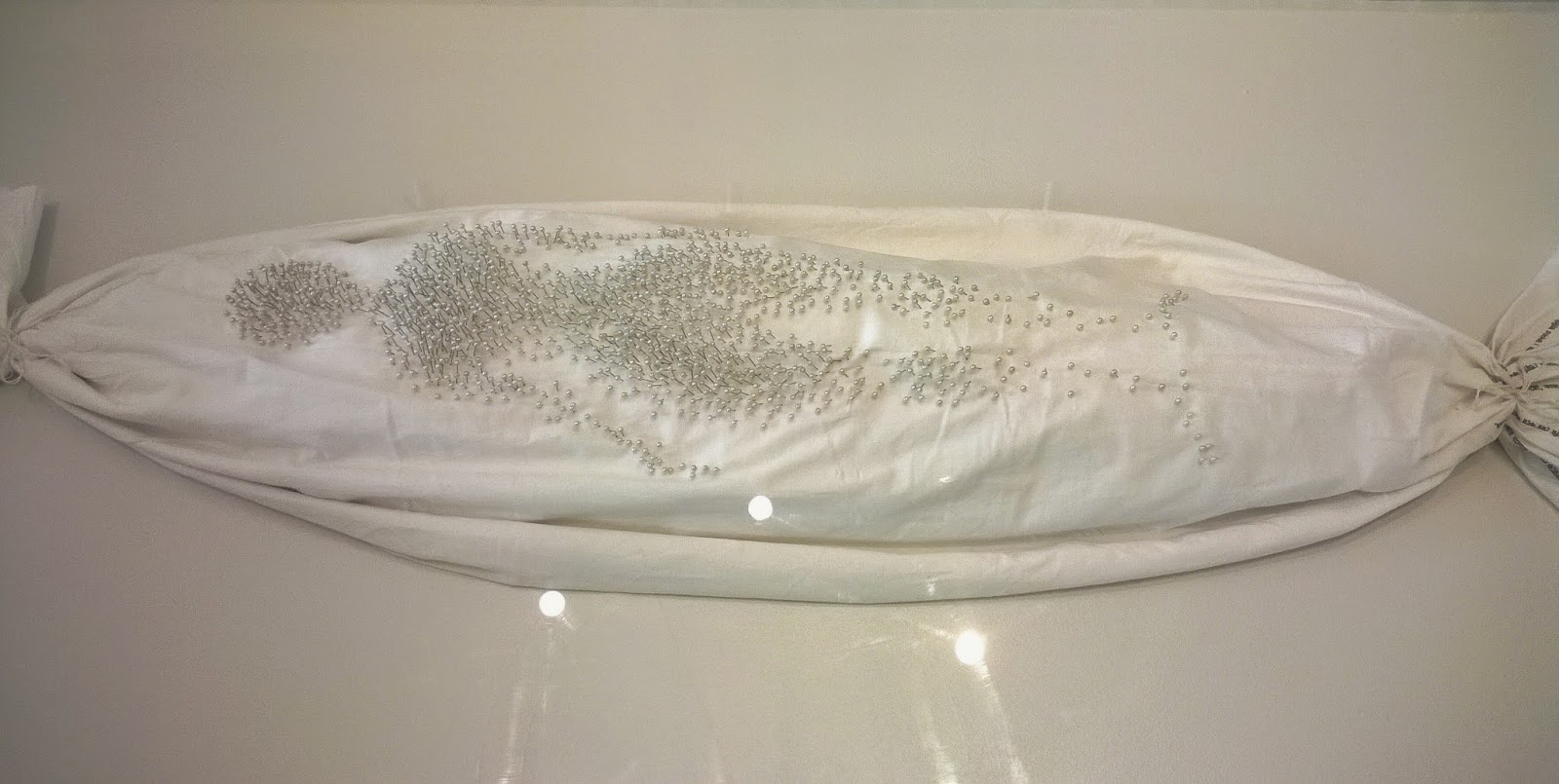 In each of her two works commemorating the workers who were killed, she uses 1138 pearlescent-tipped sewing pins - one for each victim who died. Alke therefore honours the work that they did as seamstresses, though it was not respected during their lifetimes.

1138 and Counting presents the pins on a scroll of cotton and muslin, grouped together like a tally. The pure yet warm off-white is peaceful and spiritual, and together with the ethereal muslin is reminiscent of ghosts and angels. 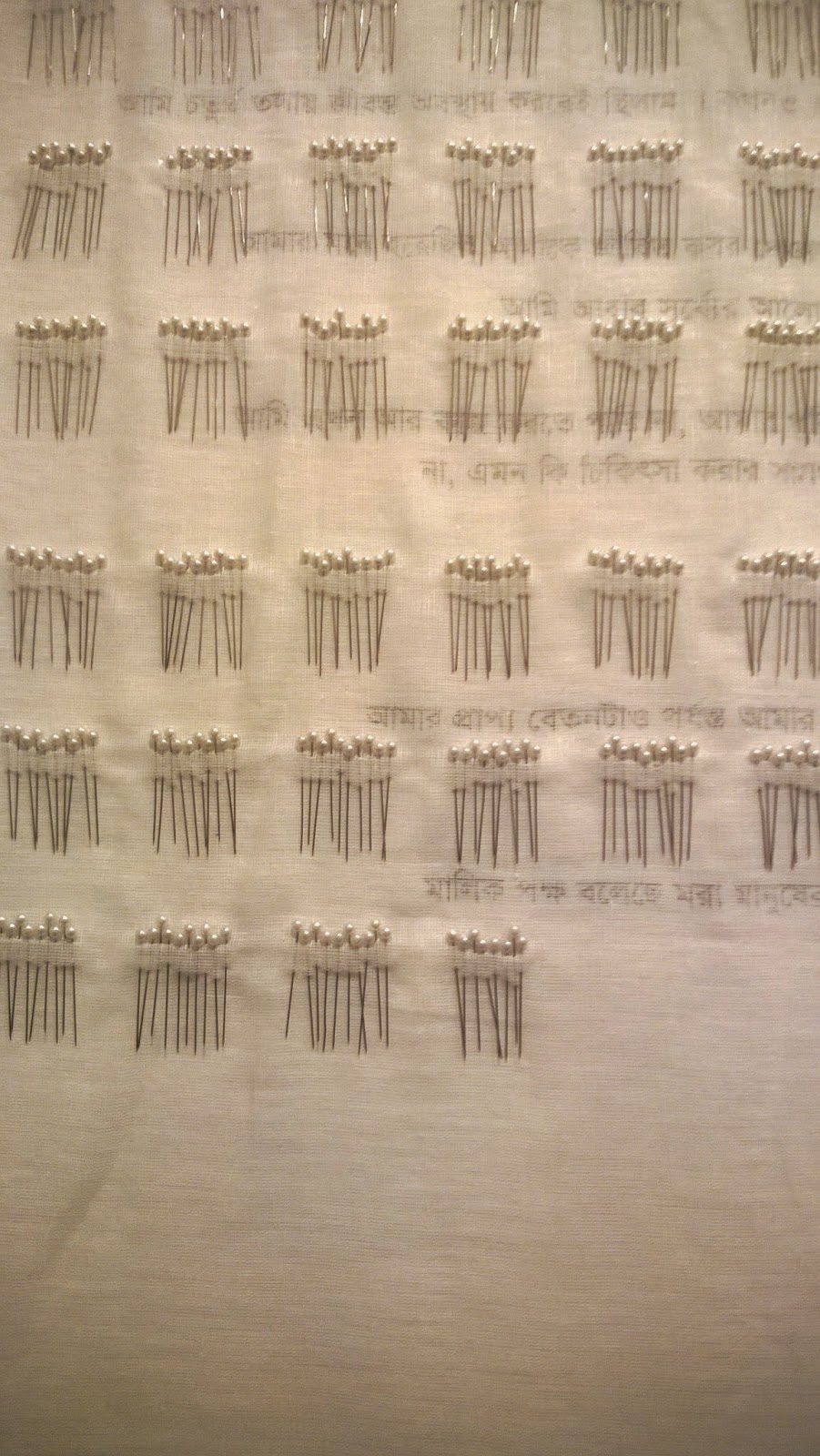 Memorial presents us with a shroud-like length of cotton (the fabric which ties the entire exhibition together) on which pins delineate the shape of a woman's body. Although the pins pierce the fabric, the body appears to be resting on it; this calls to mind the stories of volunteer rescuers bringing victims out of the wreckage of Rana Plaza on bolts of fabric.

Alke has incorporated the survivors' testimony into both pieces:

They would not pay us if we didn't work that day.

One supervisor forced us to go inside.

We tried to get out but they wouldn't let us.

Our managers said, 'We will all die some day'.

If you die here, so be it. But you can't leave, get to work.

My hand got stuck when the roof came down. So I tried to cut off my hand but I couldn't.

I was buried alive. I never thought I'd see sunlight again.

I can't work anymore. I can't support my family, can't afford my treatment.

They didn't even pay my kids' due salaries. They said there is no salary for the dead. 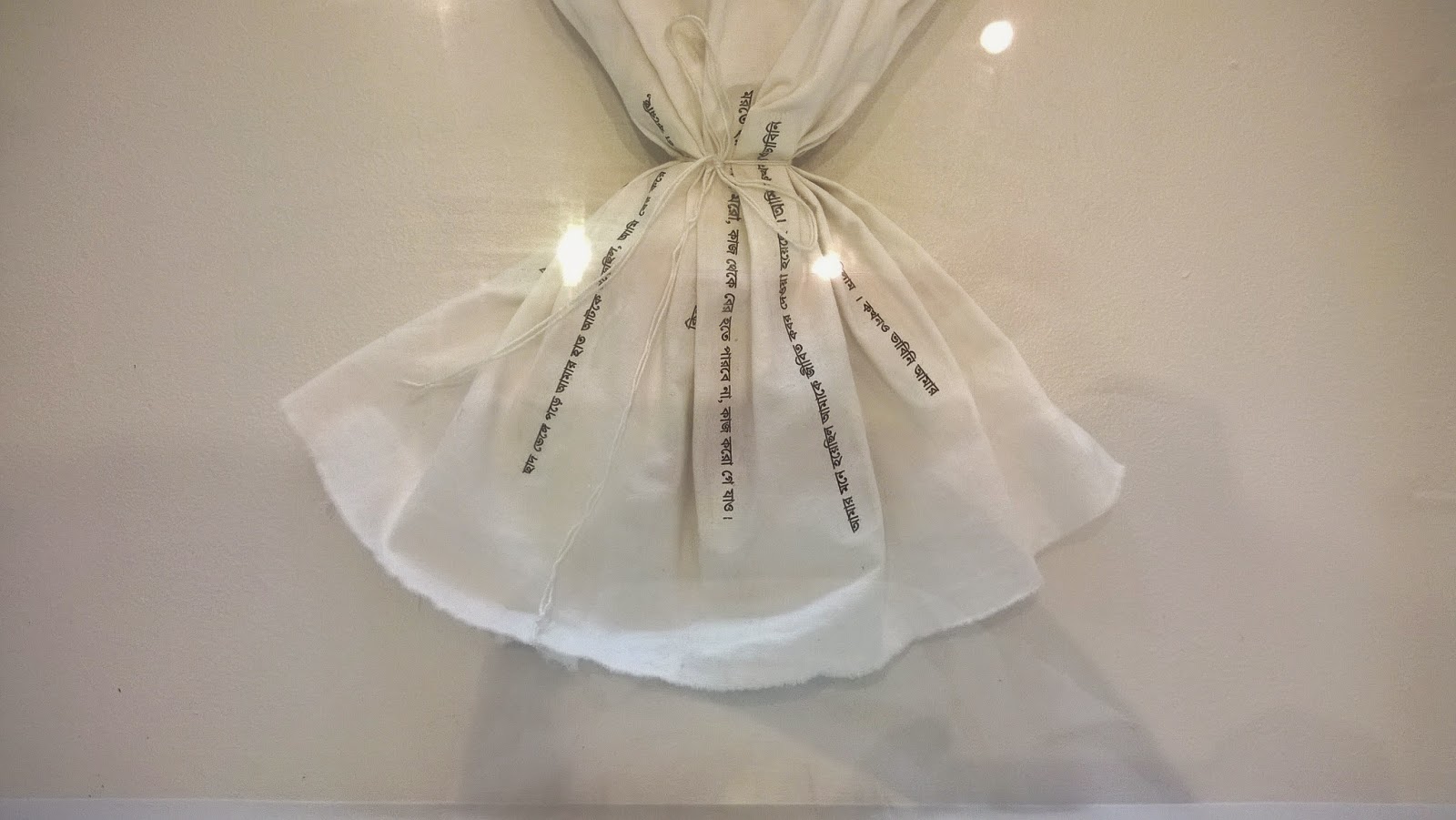 Alke's neighbours transcribed this testimony from videos published by Labour Behind the Label into Bengali script, a further example of her collaborative process. Alke transferred the script on to the cotton of the works. In 1138 and Counting, the script rises from behind a haze of muslin, reminding us, like Morris's Dilemma, that the chain of supply in the textile industry is obscure and murky.

Posted by Kate Elisabeth Rolison at 13:59