I have a huge backlog of blog posts to get through, and so I thought I would begin with a new project I am undertaking. Abnormal Feeling of Wellbeing is a lighthearted body of work about serious mental illness. Consisting of lists and mantras, illustrated infamous quotations on and historical allusions to the mind and observations on the absurdity of everyday life, it takes its title from a listed possible side effect of the antipsychotic drug Olanzapine. Reading this, it struck me that an abnormal feeling of wellbeing was precisely what I was aiming for, giving that I had been feeling abnormally unwell for half my life by that point.
The resulting works expand the notion of side effects and are hand embroidered on to vintage linens, overbearingly florid, so lovely as to be abject, naive and intricate. They are comprised of skewed self portraits and acrobatic word play, always looking at the power implicit in language; how language signifies sickness without spelling it out and can at other times imprison, but ultimately, when put into the hands of the marginalised rather than decreed to them, liberates.

The piece below is a playful allusion to the phrase "she wouldn't say boo to a goose". 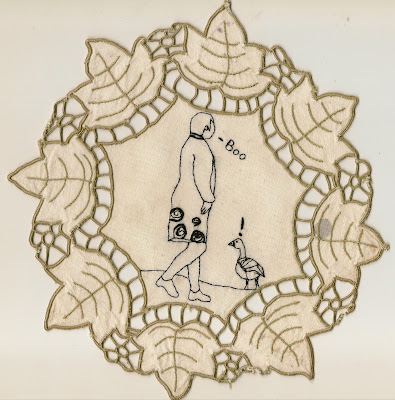 This piece, List of Possible Side Effects, explores the other, less discussed, unusual side effects of Olanzapine; the sensation of "Walking through treacle", "Reduced dreaming" and "Unexpectedly finding oneself near cake", rounded off with the very bizarre side effect I read on that Olanzapine pamphlet. I "cheated" somewhat with this piece, as a very talented embroiderer of yesteryear has worked some incredible stem and satin stitch on to the cotton. All that was left for me to do was embroider the text in variegated blue thread, and bullet point each side effect with red gems anchored with pink beads, to pick up the tones in the roses. 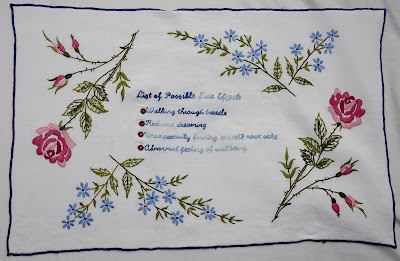 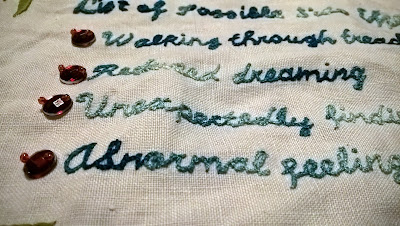 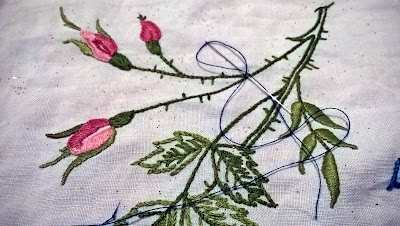 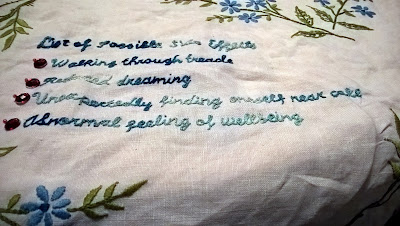 Freudian Slipstitch is the third in the series, and is currently under construction, ready for its protagonist to be placed in the scene. After that, perhaps a series of handkerchiefs. Onwards and upwards!

Posted by Kate Elisabeth Rolison at 11:06