Tracey Emin, too, is a woman obsessed with love. Evidence of this can be found in the titles of her two most recent exhibitions, Those Who Suffer Love and Love Is What You Want. Her neons blaze scrawled love notes, her monoprints beg for “more love”, her blankets whisper, in huge letters, sweet nothings.


Emin has said of love that it "rarely comes easily and if it does, it usually goes quite quickly". Her work constantly touches on intimacy, as in Everyone I Have Ever Slept With. It's a common misconception that the names appliqued on the interior of this tent were those of everyone Emin had ever had sex with. In fact, they were literally the names of everyone she had ever slept beside.

Writing underpins Emin's artistic practise. She has said that she is "not known as a text-based artist", but "should be really". She pushes the boundaries between writing as visual art and visual art as writing. Melanie McGrath said of Emin that “She is above all a storyteller and her stories are embroidered, both literally and metaphorically”.

Emin is indeed a consummate storyteller; revealing tell-alls are sprawled across her confessional, autobiographical blankets, ranging in size from five-inch-high appliqued letters to tiny scrawled passages on paper; her monoprints are written in her own naive, chaotic scrawl; her neon installations are recognisably “written” in Emin’s own handwriting.

Appropriately for work of such a universal appeal, the unrefined, unpolished aesthetic of Emin’s text connects her audience more immediately with her art. Emin cuts and appliqués felt letters onto her blankets by hand.This personal approach suits Emin’s often chaotic, brutal and autobiographical subject matter.

Some of her monoprints are solely text, featuring stream-of-consciousness phrases which appear to have the authentic and emotional “voice” of the artist, and a confessional, diaristic tone.

One of Emin’s most common artistic formats is the quilt-like blanket. The creation of blankets or wall hangings like Emin’s has traditionally been a woman’s craft pastime. However, rather than meticulously piece together a network of twee fabric patches to create a quilt (as prior generations of crafting women have done), Emin hand-appliques unsophisticated letters and loud, mismatched fabrics onto her blankets. Critics have argued that Emin reappropriates traditionally feminine arts and crafts for feminist purposes, creating a savage, imperfect female aesthetic in chintzy, feminine media. 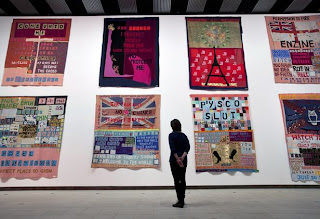 Emin has said that, through her embroideries, "the line I draw is accentuated and extreme, which complements the way that I think." She has also said that she does not use embroidery "like a craft, but like high art".

Posted by Kate Elisabeth Rolison at 13:20