A Trail of Thread 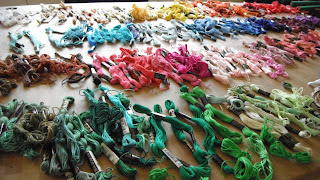 Last year my housemates were very amused by the fact that wherever I went in the house, a trail of embroidery thread followed.

Aside from a brief stint during GCSE Textiles, I began embroidering in earnest whilst recovering from a period of illness. This afforded me a lot of time to fill, and to occupy me my dad bought me a couple of craft kits, one of which was a set of make-your-own hand puppets. Sewing the simple tiger template together re-introduced me to the methodical, repetitive and (helpfully) time-consuming process of embroidery.

Encouraged by the simple yet impactful cross-stitched confessional texts of Scarlett Barry, I began cross-stitching my own writing. As a writer, text is obviously my most important medium, and I was pleased with the crisp, regular appearance of cross stitched text. Cross stitch is a craft which both my grandmothers engage in, and so I feel it has been handed down to me. 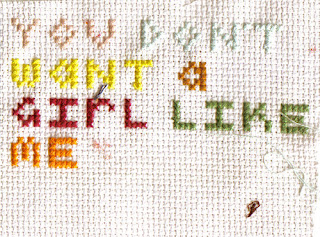 I also began experimenting with standard hand embroidery, coupling one-liners, misheard phrases and puns, with detailed hand-stitched illustrations. This embroidery followed in the tradition of samplers with their combination of image and text. The naivety of my first attempts at hand embroidery is also reminiscent of these samplers, which were often undertaken by very young children.
For this project I will be using the medium of embroidery to explore themes of love and loss. I will embroider onto linens handed down to me from my grandmother, in turn handed down to her from my great grandmother, to emphasise the domestic and feminine associations of the craft, as well as the notion that it is a craft handed down from mother to daughter.
Posted by Kate Elisabeth Rolison at 11:26