Say It With Flowers

"What a desolate place would be a world without a flower! It would be a face without a smile, a feast without a welcome. Are not flowers the stars of the earth, and are not our stars the flowers of heaven?" ~ AJ Balfour

A rainy Friday found Pip and I at the Garden Museum delving into the history of the flower trade. Whilst the flowers outside were getting a drenching, we learnt an awful lot of floral trivia, including that the Floral Industry in the UK is worth a whopping 1.65 billion, that roses are edible, that over four hundred flower girls were selling bunches in London in 1851 , and that, according to scientific research, flowers just make us feel good.

I've recently started stitching some flowers that feel bad; some melancholy flowers. This is a bit of a break from my big project, The Constellation Quilt, harking back to my project Milk Thistle (which I swear will get done one day!), which explores the link between flowers and sickness and recovery. 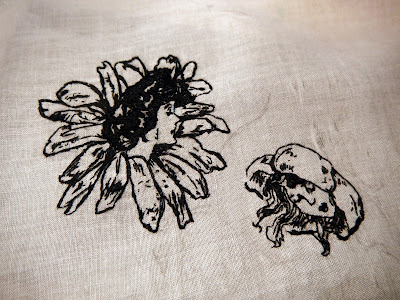 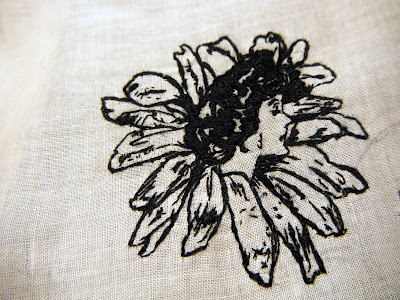 Possibly the flowers I'm stitching are suffering from depression; they certainly seem (literally) downcast, and slightly weepy! They are an illustration from Land of Play - Verses, Rhymes, Stories, first published in 1911 and written by Sarah Tawney Leffert. The melancholy flowers were sketched either by M.L. Kirk or Florence England Nosworthy (though I do hope by Florence, due to the floral connection of her first name!)

I'm growing very fond of turn-of-the-century illustrations of this style; they seem to really suit my laywoman's blackwork technique (not for long though; soon I'll be a pro at blackwork, as it's one of the first techniques I'll learn at the Royal School of Needlework!)

Floriculture, the exhibition at the Garden Museum, may have been all about the inspiration afforded by cut flowers, but a site specific installation which I came across recently celebrated both the vibrancy and the restorative properties of living flowers. Bloom was a public artwork comprised of twenty eight thousand potted flowers which filled the offices, basements, day rooms, wards and corridors of Massachusetts Mental Health Center from the 14th to the 17th November 2003. The building was scheduled to be knocked down the same year, and the artist, Anna Schuleit, was commissioned to create a public artwork memorialising the lives and experiences of those who had lived, worked, and been treated there over the building's lifetime; a memorial which was also open to the public. Although the Center had been a place of healing and hope as well as sadness and despair, Schuleit was struck by the lack of colour and vibrancy in the worn old halls. She struck on flowers, a symbol of vitality, new beginnings and hope, to flood the building with. In a fantastic interview on the Colossal art website, Schuleit writes that "Bloom was a reflection on the healing symbolism of flowers given to the sick when they are bedridden and confined to hospital settings. As a visiting artist I had observed an astonishing absence of flowers in psychiatric settings. Here, patients receive few, if any, flowers during their stay. Bloom was created to address this absence, in the spirit of offering and transition." This very much relates to my Milk Thistle project, and makes me wonder why it is that the mentally ill are rarely brought flowers, when surely an injection of cheerful nature into their environment could (almost always) only be positive. Certainly many of the former patients who visited Bloom during its four day installation were deeply moved by the artwork, with one writing "Today we flourish", and another visitor commenting "For all the patients who never received flowers, these flowers are for you.” I don't know if I've ever encountered such a life-affirming and gorgeous artwork; part of me wishes I could've nipped across the pond in 2003 to witness it, but another part recognises that it was a deeply personal installation best experienced by those who had been a part of the building's story.

Flowers signify so many different things in our culture; healing, new beginnings, love, celebration, life itself. I will be undertaking a little research into the language of flowers to learn more about the symbolism of the "stars of the earth".
Posted by Kate Elisabeth Rolison at 12:54