On Tuesday it was Ada Lovelace Day. Ada Lovelace would be a remarkable woman in any age, but in the 1800s she was a true trail blazer. The only legitimate daughter of Lord Byron, Ada's puritanical mother, Anne Isabella Noel Byron, thought that instructing her daughter in the sciences would quell any dangerously poetic genetic pre-disposition in Ada. What she didn't quell was Ada's brilliance. She was a gifted mathematician, far more forward-thinking than her male contemporaries, and credited as having written the world's first computer program. Ada's most famous quote is "That brain of mine is more than merely mortal, as time will show." The computer programs which add so much ease, convenience, and support in our daily lives are proof of that.

In this spirit, in the run up to Ada Lovelace Day, Share UK, "a community based organisation that uses digital technology to share stories, ideas and skills", ran a two day coding and crafting workshop for pairs of mothers and daughters at Gnome House in Blackhorse Road, Walthamstow, led by Esther Freeman, with ingenious Carolyn Abbott of Walthamstow institution E17 Designers manning the sewing machines and Bronwyn Goodwin providing techy know-how. And I taught a wee bit of embroidery and threaded a lot of needles.

The truly thrilling (at least to me) part of the project was incorporating hand embroidered circuits into textile craft. It was so exciting, in fact, that it has to be written in italics. The theme was inspiring women, and so in my sample I prepared earlier to give the mothers and daughters some ideas, I paid homage to my heritage with the phrase "This thread connects me to a lineage of needlewomen across the ages." I stitched a sort of "family tree" of sewing kit essentials, with scissors, a pin cushion, a thimble and a skein of thread all represented. As the latest member of the "family tree" I stitched a light bulb, in the centre of which was a tiny blue LED connected up to a battery holder. I think I audibly gasped when I put a battery in and it worked first time. 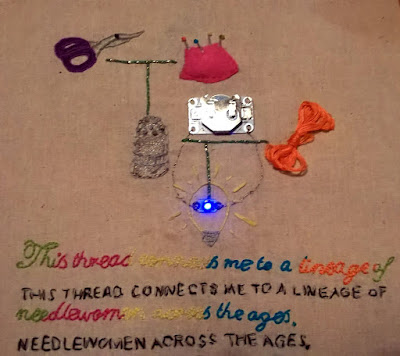 The participants in the workshop had much better ideas than my rather scrappy one. The little girl in the duo who created the cushion below was named Aphra, after Aphra Benn, the first woman in this country acknowledged with earning her living from her writing (she was also a spy for Charles II, but it's the other fact I find more inspiring). Behn was a playwrite, and so modern-day Aphra and her mother appliqued and embroidered Comedy and Tragedy masks on to the cushion, along with a spyglass, and most cleverly of all, a "quill" fashioned from a feather and an embroidery needle, which, when touched to an inkwell, completed the circuit and made the cushion light up. 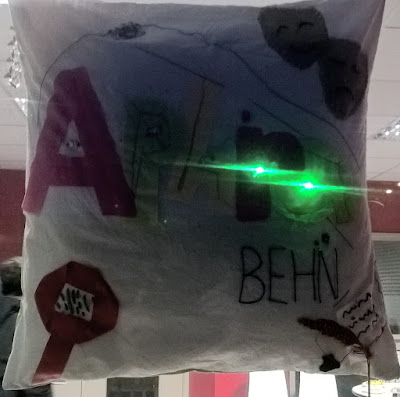 Taylor Swift was a popular choice of inspiring woman, with two cushions featuring gleaming guitars being created in her honour. 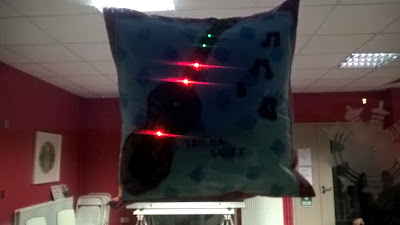 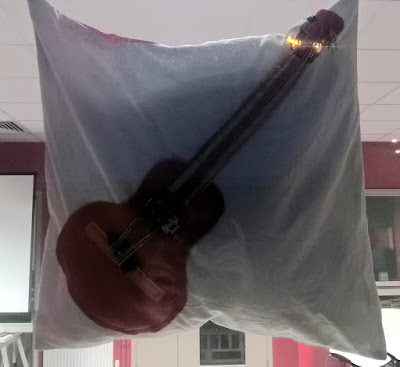 The creator of the cushion below wasn't so keen on hand sewing but took to the sewing machine instantly, and very cleverly replicated the glowing light of the XBox controller with her circuit. 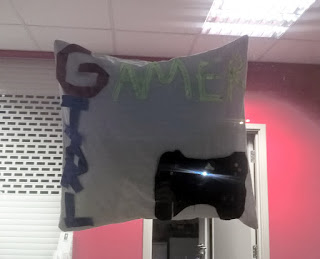 With this cushion, it was one of the mum's turn to shine; I showed her how to couch, and she produced the most beautiful lettering in a variety of colours. I think the choice of Beyoncé song may have been her daughter's, though, and I thoroughly approve! 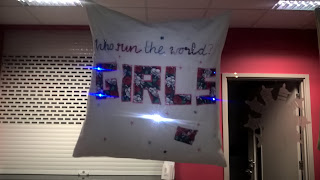 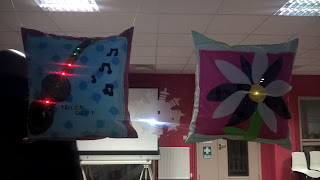 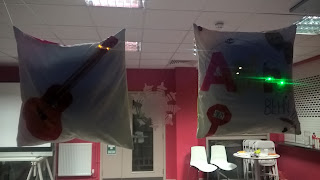 A very sweet mother-daughter team worked really hard to make the cushion below, based around a true female role model (or at least I think so!), JK Rowling, appliqueing the magic word for the light-giving spell, "Lumos!" and surrounding it with other words for light, and LEDs refracting beneath crystal glass beads. 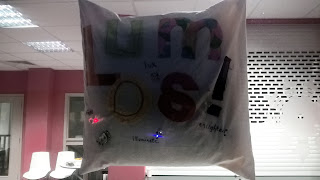 A number of my female friends will be very happy to see their alma mater paid respects; this cushion is dedicated to the teachers of Walthamstow School For Girls, hand appliqued and embroidered with its crest and motto "Neglect not the gift in thee"; good advice for every girl and woman, I think. The centre of each of the flowers on the crest light up. 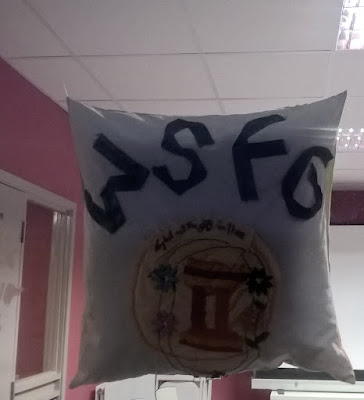 This impressive cushion was produced by a pair of friends rather than a mother-daughter duo; it features the Suffragette colours of purple, white and green (which reminds me I must book tickets to the cinema to see Suffragette soon), reminding us of the struggle and sacrifice so many women made for us to have the vote. The circuitry is all hidden behind the flower and its centre glows a warm yellow. 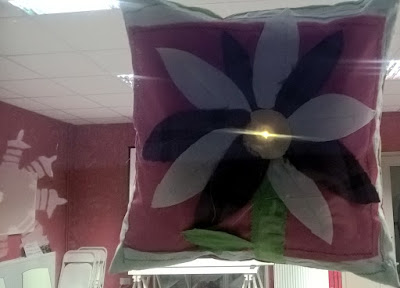 The mother of the pair who made this cushion owns a vintage company, and had excellent colour sense when putting together this tribute to Sonia Delaunay with her daughter. There's some gorgeous, joyfully colourful long and short stitch in there, but unfortunately when I took this photograph it was dark (to show off the LED lights to best effect) and so it doesn't show up. Which is all the more reason to get down there and see the cushions exhibited for yourself! They're up in the windows of the café at Gnome House until the end of this month. Here are directions and a map. 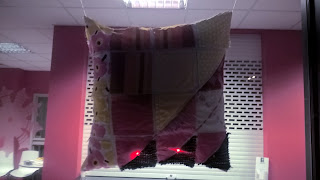 Posted by Kate Elisabeth Rolison at 08:46