Today I visited the Fashion and Textile Museum on Bermondsey Street to take in their exhibition of handkerchiefs, The Printed Square. 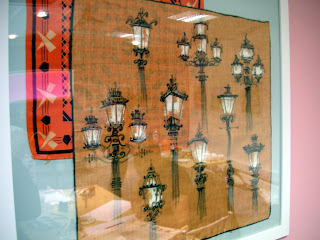 The handkerchiefs on display differed from my embroidered vintage handkerchiefs in that they were examples of early - mid twentieth century design rather than handicraft/art. 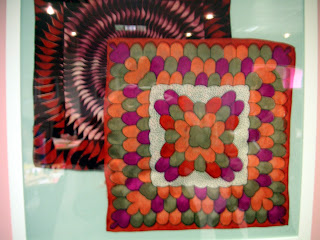 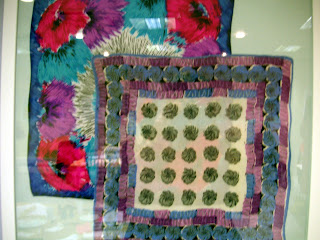 I didn't visit the exhibition so much for the handkerchiefs on display, however, as for their history.

In The Printed Square, the book published to coincide with the exhibition, the textile and costume designer Nicky Albrechtsen explains how handkerchiefs have played a role in courtship and romance rituals over the centuries.

As far as in known, this began in the Middle Ages when jousting knights would pin a lady's handkerchief - her "favour" - to their sleeve to show for which lady they were riding.

The word "handkerchief" derives from the French "couvrechef", meaning "head cover". In the Tudor period English women would bestow elaborate "handkerchers" upon their preferred suitors, who wore them on their hats.

In the Victorian era there was even a "language" of handkerchiefs in a similar manner to the language of fans, as Albrechtsen explains; "letting" one's handkerchief "drop to the ground ... was an invitation for friendship; twirling it in both hands indicated indifference; the gentle mopping of one's forehead was a sign of being watched; and drawing a handkerchief across one's cheek signified love".


This may sound fanciful, but would have been an invaluable secret code for strictly chaperoned young women who could not freely express their feelings.


Obviously this casual sex handkerchief code is strikingly different from the romantic and rather innocent Victorian one!


On a more romantic note, during the Second World War, soldiers serving overseas sent handkerchiefs hand-embroidered with messages of love back to their sweethearts at home. When I met Carolyn Abbott, founder of E17 Designers,she commented that my Cure for Love embroideries were reminiscent of these war-time embroidered tokens. 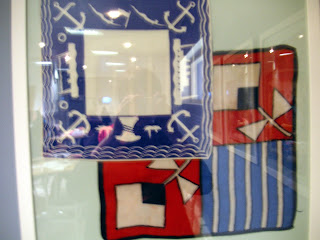 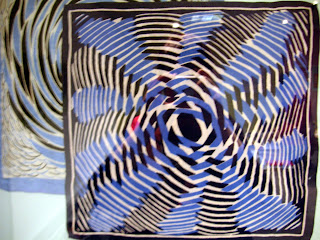 Bearing all that history in mind, it's time for me to get back to embroidering my own 'kerchief!
Posted by Kate Elisabeth Rolison at 12:43