In anticipation of the Soft exhibition at The Mill in June, I am stitching a soft sculpture artist's book. 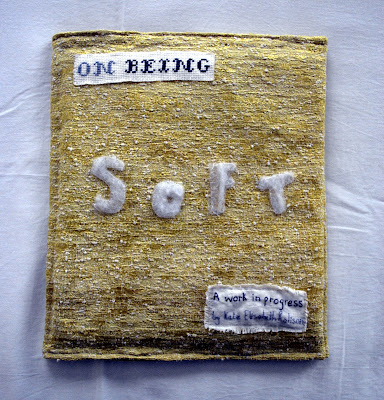 The cover is constructed from a 1920s or '30s gold brocade curtain stuffed with wadding, to make the book, well, soft (my friend Alys mentioned that it could double up as a cushion).


The cover reads "On Being Soft - A work in progress by Kate Elisabeth Rolison". The pages inside will deal with notions of softness; of personality, of the female form, with the sense of touch, and more.


On the first page is a pocket made from blue and gold batik fabric, which bears a cross stitched quote by the artist Lily van der Stokker. 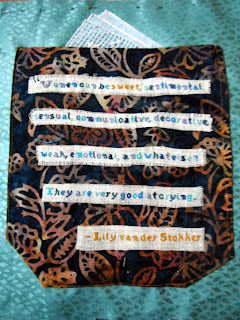 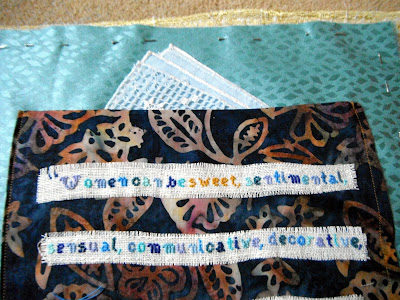 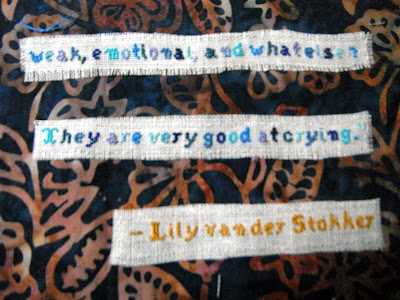 The quotation reads "Women can be sweet, sentimental, sensual, communicative, decorative, weak, emotional, and what else? They are very good at crying".


When I came across this quotation in van der Stokker's book It Doesn't Mean Anything But It Looks Good, it struck me that the qualities she was listing could be thought of as different kinds of softness. A particularly feminine softness, which was what I wished to explore in my book.


I realise that some may see this quotation as anti-feminist, but I feel it (along with van der Stokker's work) celebrates the feminine aspect of womanhood. Indeed, van der Stokker describes herself as a "feminist conceptual pop artist"!


Below are some examples of van der Stokker's work, taken from It Doesn't Mean Anything But It Looks Good, published by Tate St Ives. The works are exuberantly, even nauseatingly, feminine and positive. In her book, van der Stokker is quoted speaking about "the strength of pink curlicues"; there is strength in this apparently "weak" feminine softness. The strength of softness is something we are aiming to explore in the Soft exhibition. 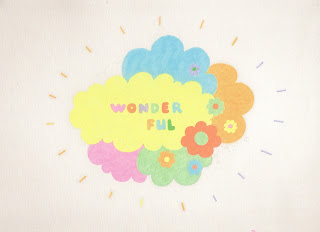 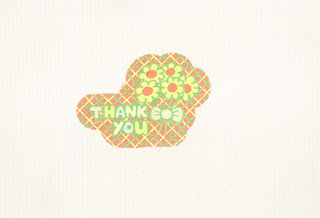 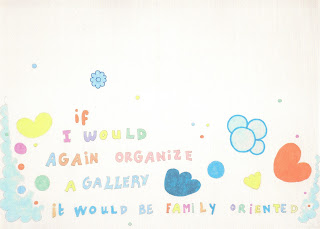 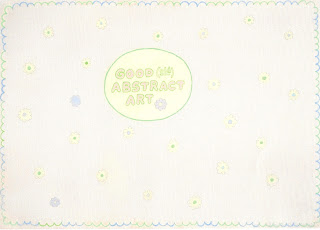 In It Doesn’t Mean Anything But It Looks Good, van der Stokker writes about how when “women refuse to hold back in their expression, we see artworks that are so different they can repulse and confuse us”. In the making of On Being Soft, I am embracing my own femininity, even those aspects of it which I have previously fought and which have nauseated me.


The pages of the book will be made to be touched, and explored; they will contain pockets which will themselves contain embroidered handkerchiefs.


I wanted the first handkerchief of the book to have a dialogue with the Lily van der Stokker quotation cross stitched on to the pocket which contains it. I focused on the last word of the quotation - crying. 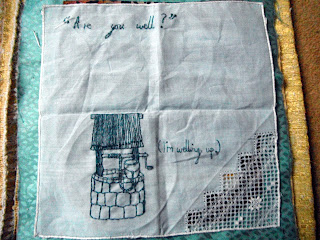 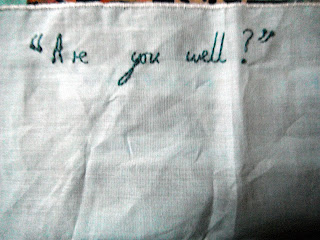 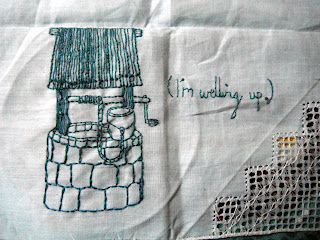 The handkerchief reads ""Are you well?" (I'm welling up.)", illustrated by, yes, a wishing well, because I have a terrible weakness for appalling puns.


There are two voices in this text; the first, a polite enquirer, and the second my interior monologue, my silenced voice, bit tongue. The words (and tears) are trapped within the folded handkerchief, and the viewer has to delve into the pocket and unfold the fabric before they are released.


I've begun to think of the different things handkerchiefs can signify; nowadays they are almost invariably only the property of older people. They catch coughs and sneezes, they are witness to outpourings of emotions, they are used to dab away a furtive tear. In old films and cartoons, they wave away maiden voyages, they are waved out of rapidly departing trains at sweethearts. Moving even further (far further) back in time, they were given as “favours” to jousting knights.

On Saturday I will be visiting the Fashion and Textile Museum on Bermondsey Street, where the exhibition The Printed Square: Vintage Handkerchiefs is currently on display. I will report back later!

Posted by Kate Elisabeth Rolison at 13:26