Here for your viewing pleasure is the final completed page of On Being Soft. 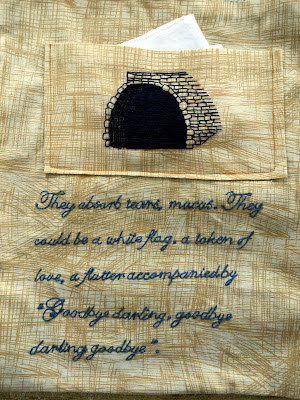 In this page, I wanted to allude back to the Lily van der Stokker quotation which I used on the very first page of the book.


I decided to explore the theme of sentimentality listed in the van der Stokker quote.


I also wanted to reference the many handkerchiefs I have used throughout the book. This choice meant that this page would have a strong relationship with the first completed page, with its handkerchief about crying. 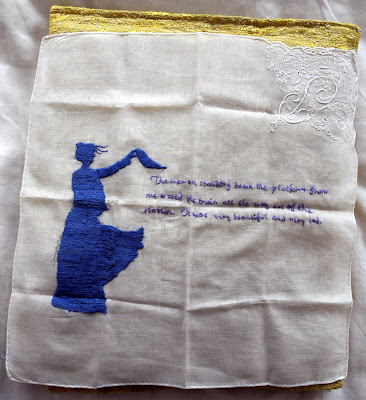 The text reads "The woman standing down the platform from me waved the train all the way out of the station. It was very beautiful and very sad."

This was once texted to me by my boyfriend after he waved me off at Paddington Station. The woman's actions clearly matched his sentimental mood!

The tunnel on the pocket is thus a train tunnel down which has disappeared the train the woman was waving to.

The text is accompanied by the silhouette of a woman in Victorian garb waving a handkerchief - making this a sort of meta-handkerchief!

Tomorrow I will post photographs of the completed book.

Posted by Kate Elisabeth Rolison at 14:14