Apothéké (n.) - the place where things are laid down

I believe cure at its root means care - D.W. Winnicott

The first of my New Year's Resolutions is to produce one self care potion a week for the entire year. What do I mean by self care? Simply, the ways we take good care of ourselves - mind, body, and soul. By potion, I mean a bottle filled with hand embroidered "ingredients", such as those that have been stitched at a number of workshops I've led.

This time, as I will be stitching one potion a week, I've decided to include the essence of the week as well as elements of self care, so that the potion is both a place where the week is "laid down" or stored, and a bank of self care tips - a bank of cure/care. Indeed, the final syllable of "Apotheké" is pronounced just like "care".

Apotheké will be an old medicine cabinet with a potent potion for each week of the year, exploring the essence of that week and elements of self care; a recipe for keeping well. It will be a diary, a testament, a confession, and a wellness tool. The potions are hand stitched, a meditative action which has its own therapeutic qualities. The Apotheké will hopefully be a travelling medicine cabinet which facilitates conversations about positive mental and holistic health, and gets people stitching. Hopefully it will engage a wide range of people, including people struggling with mental health problems, perhaps in embroidery workshops which meld craft and conversations about wellbeing.

You can get involved right now, and you needn't even pick up a needle and thread if you don't want to. You can tweet, tumble or Instagram using the hashtag #secretsofselfpreservation, and write about a simple way you plan to, or already do, take good care of yourself. Alternatively, you can create your own embroidered (or written on paper, I'm not fussy!) potion; I'd love to see some pictures of your potions popping up in the #secretsofselfpreservation tag.

Here is mine for the first week of 2015. This week, I've been battling chicken pox, at times impatiently; I seem to forget that illnesses of all kinds take it out of you, and that it's important to recuperate. I just want to stitch around the clock and see friends, just as I would if I were well.

So my stitch-written record of this week reads "Physical illnesses take time, too; don't fight sleep". I'm not too troubled by how perfect (or indeed not) the stitching is, as this is a personal project and is as much for my own wellbeing as artistic endeavour, if not more so. So if you want to join me, don't worry about making your stitches perfect! The message is the important thing, and it's difficult enough to embroider on ribbon or a scrap of fabric which is small enough to fit in a tiny bottle without worrying too much about how it looks. I have a stock of spice jars, lab bottles, and cocktail beakers to use in this project over the duration of the year - any small bottle with a lid of some sort will do.

For the diaristic element, I have holepunched some silvery card I used to back Pip's hand embroidered birthday present, and cut up a dotty piece of wrapping paper from another of his presents; when I uncork the bottle, I will be reminded that this week I watched Pip open his presents from the safety of Skype due to the aforementioned chicken pox, and the dozens of spots will remind me of just how itchy that chicken pox was!

Each potion needs a name; in a tribute to the protagonist of the film Waitress, who creates otherworldly pies with inventive titles inspired by her life, I have named this one Week 1: Pox Potion, scribbled on a gingham medical cross. Now I have a whole week to dream up another potion... 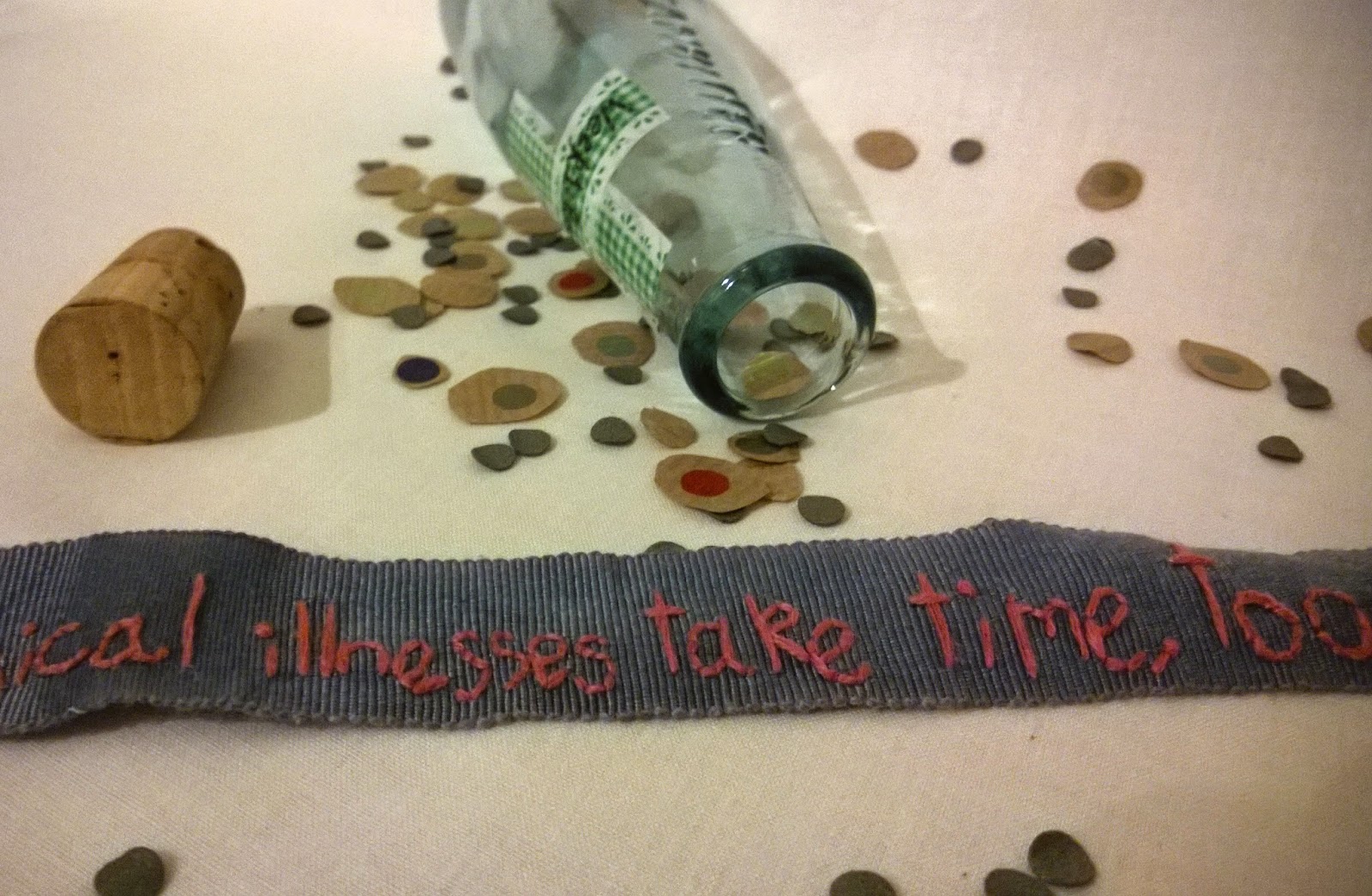 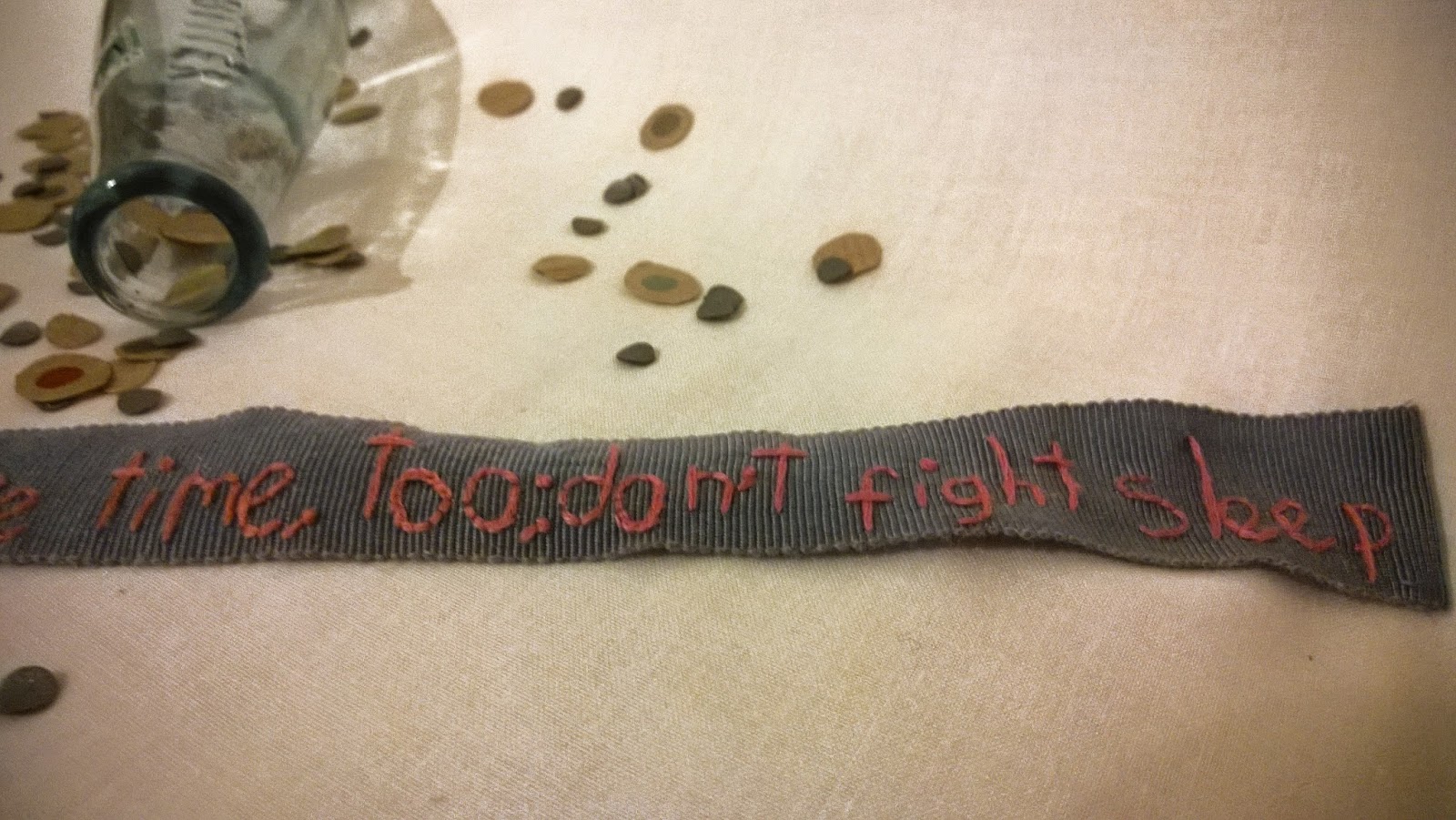 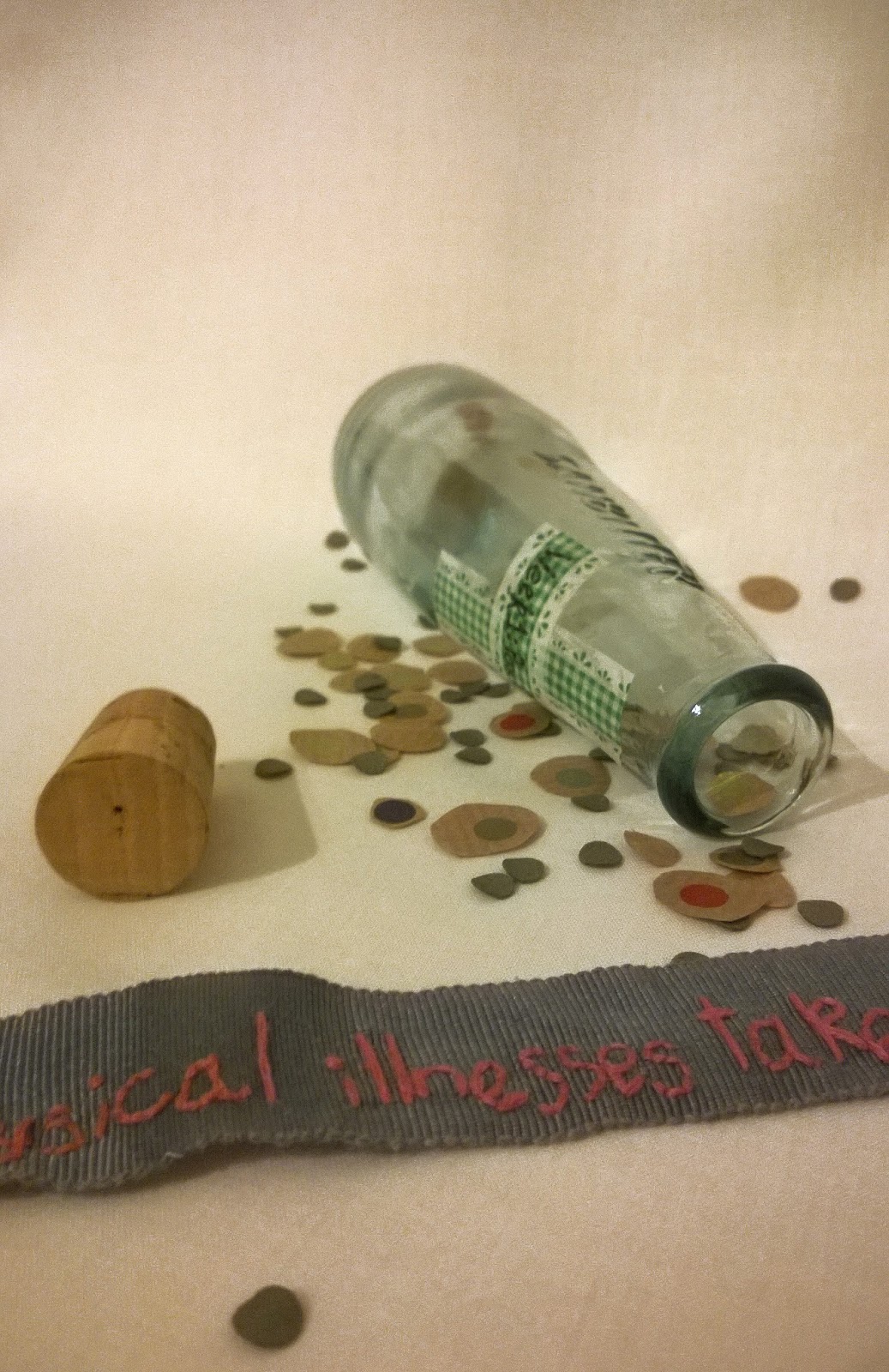 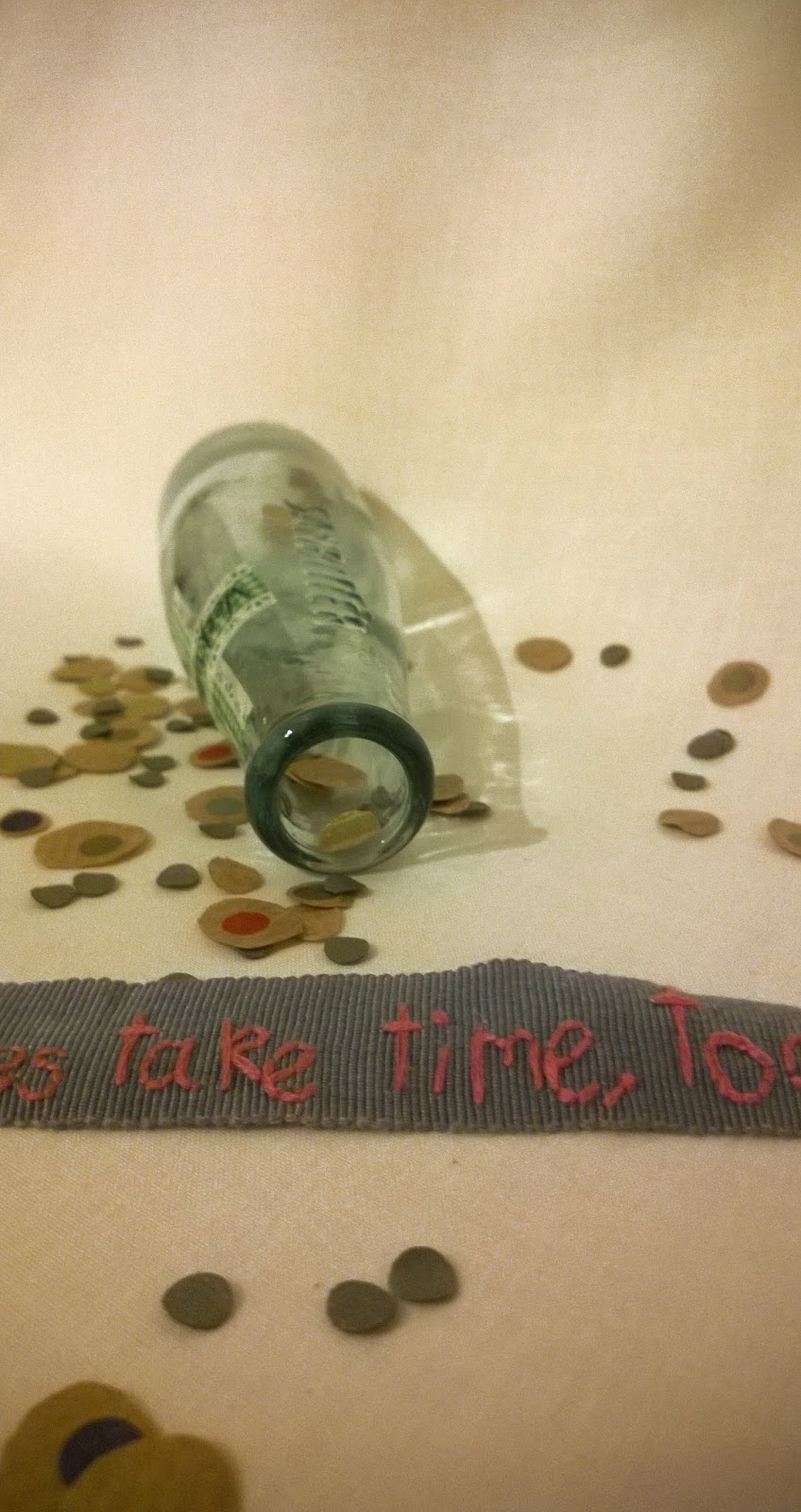 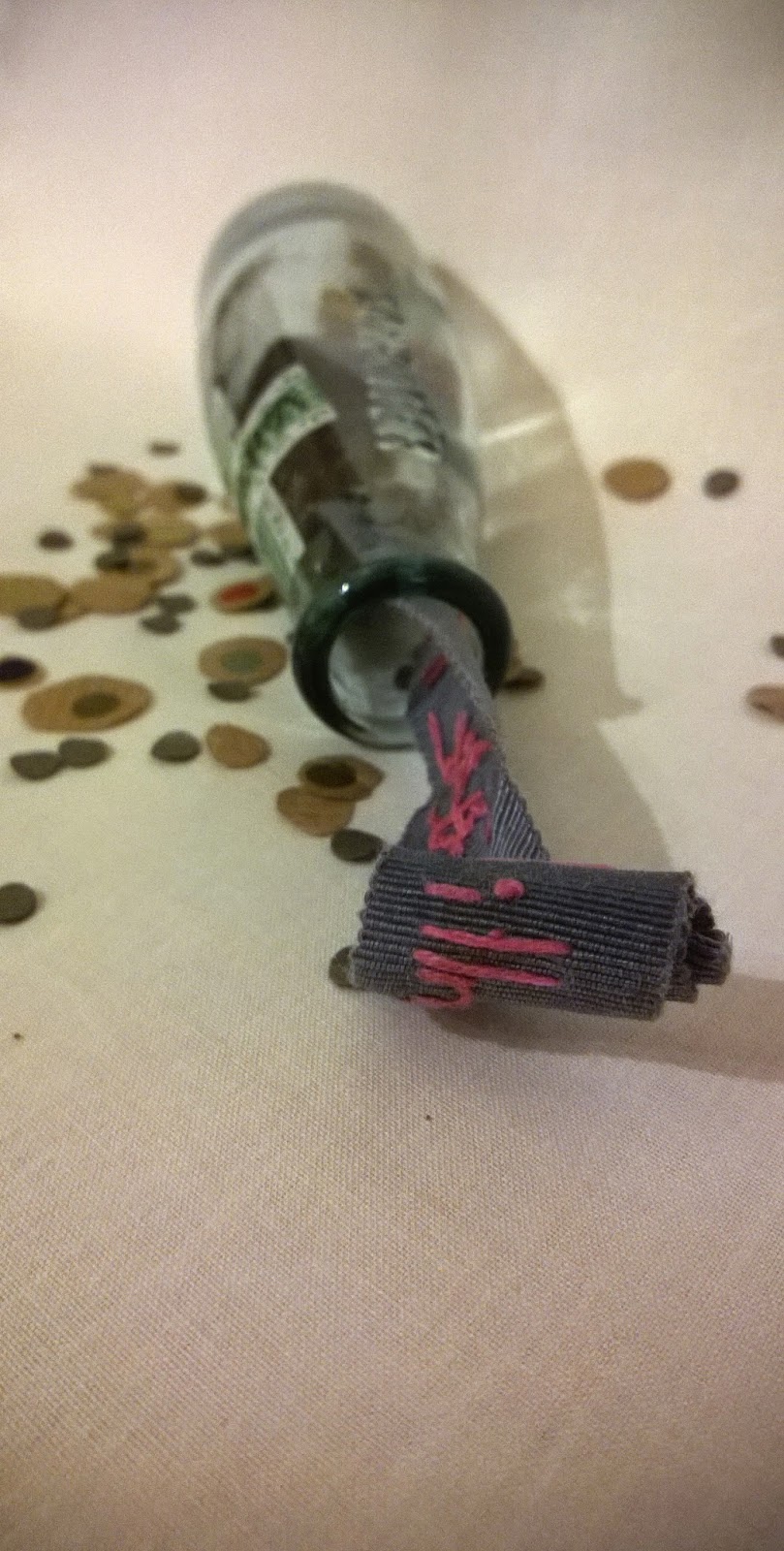 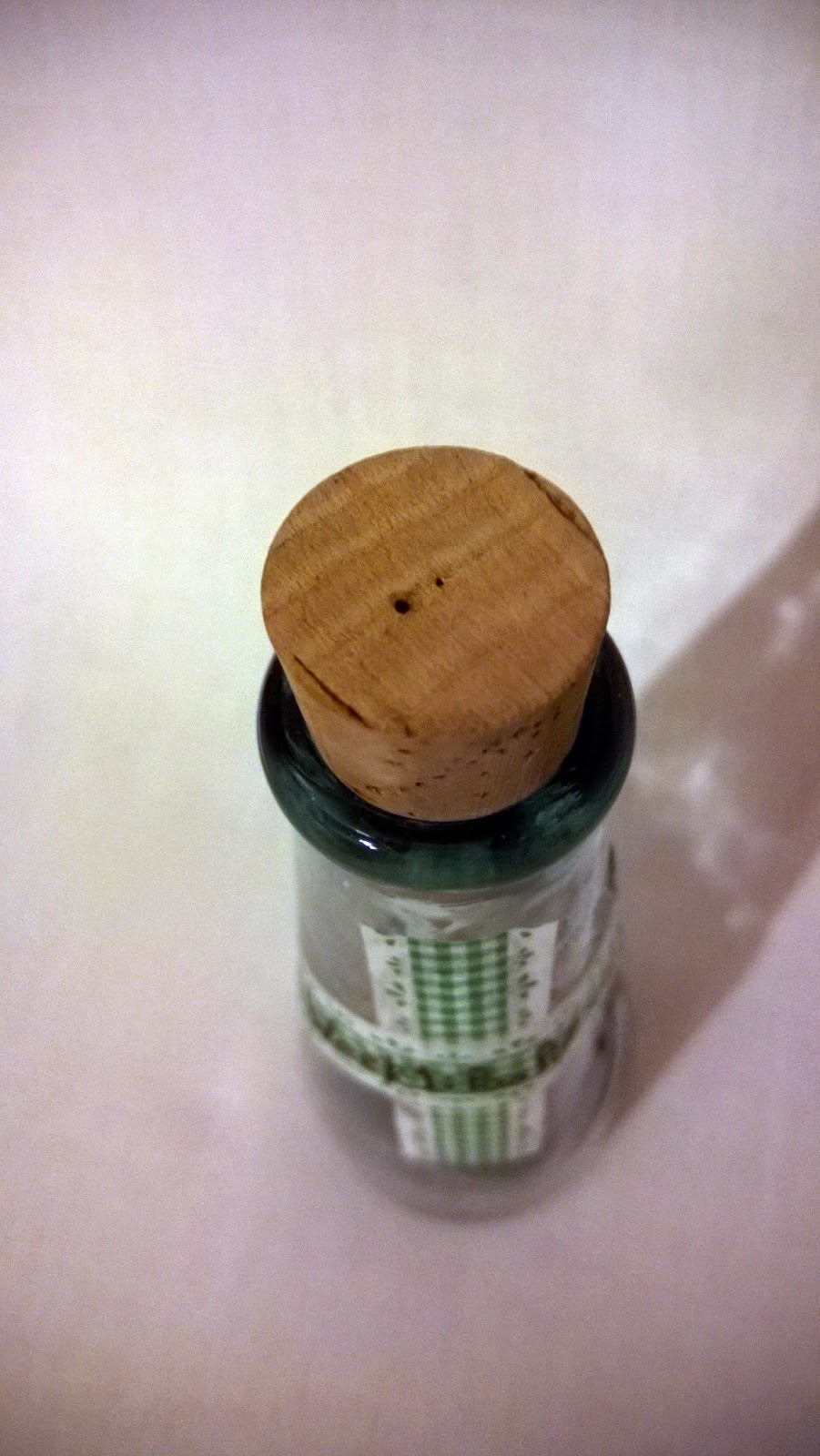 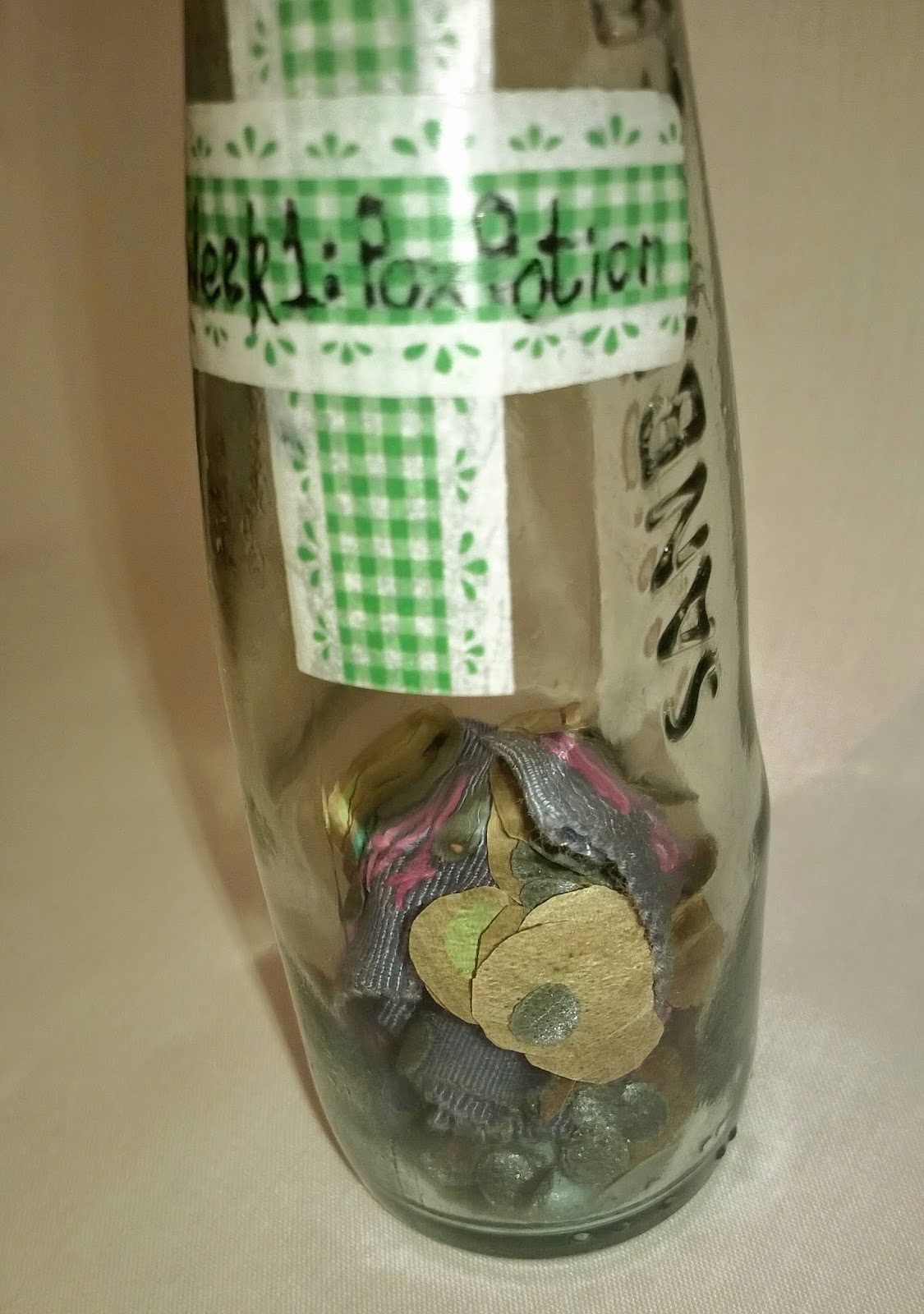 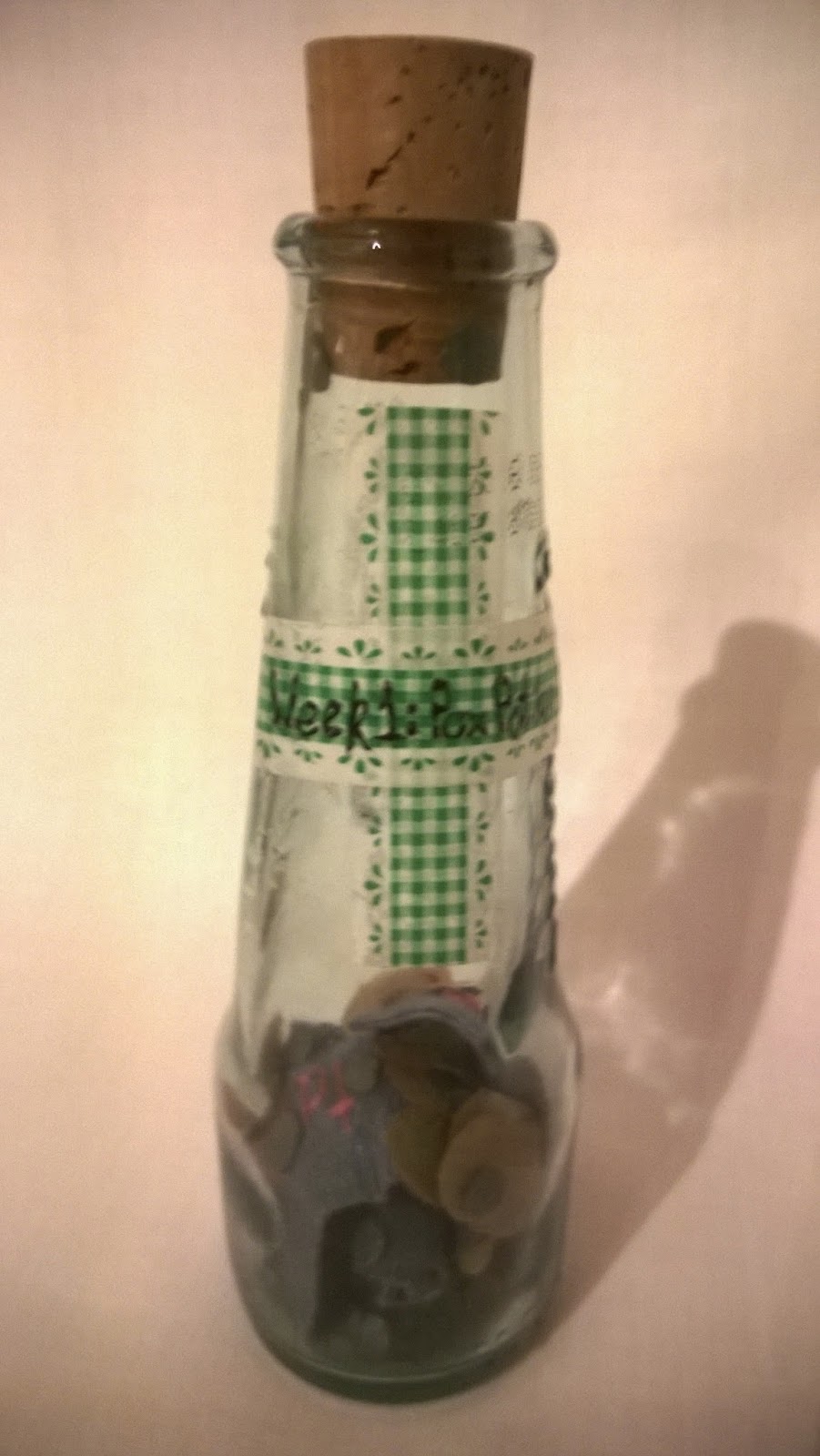 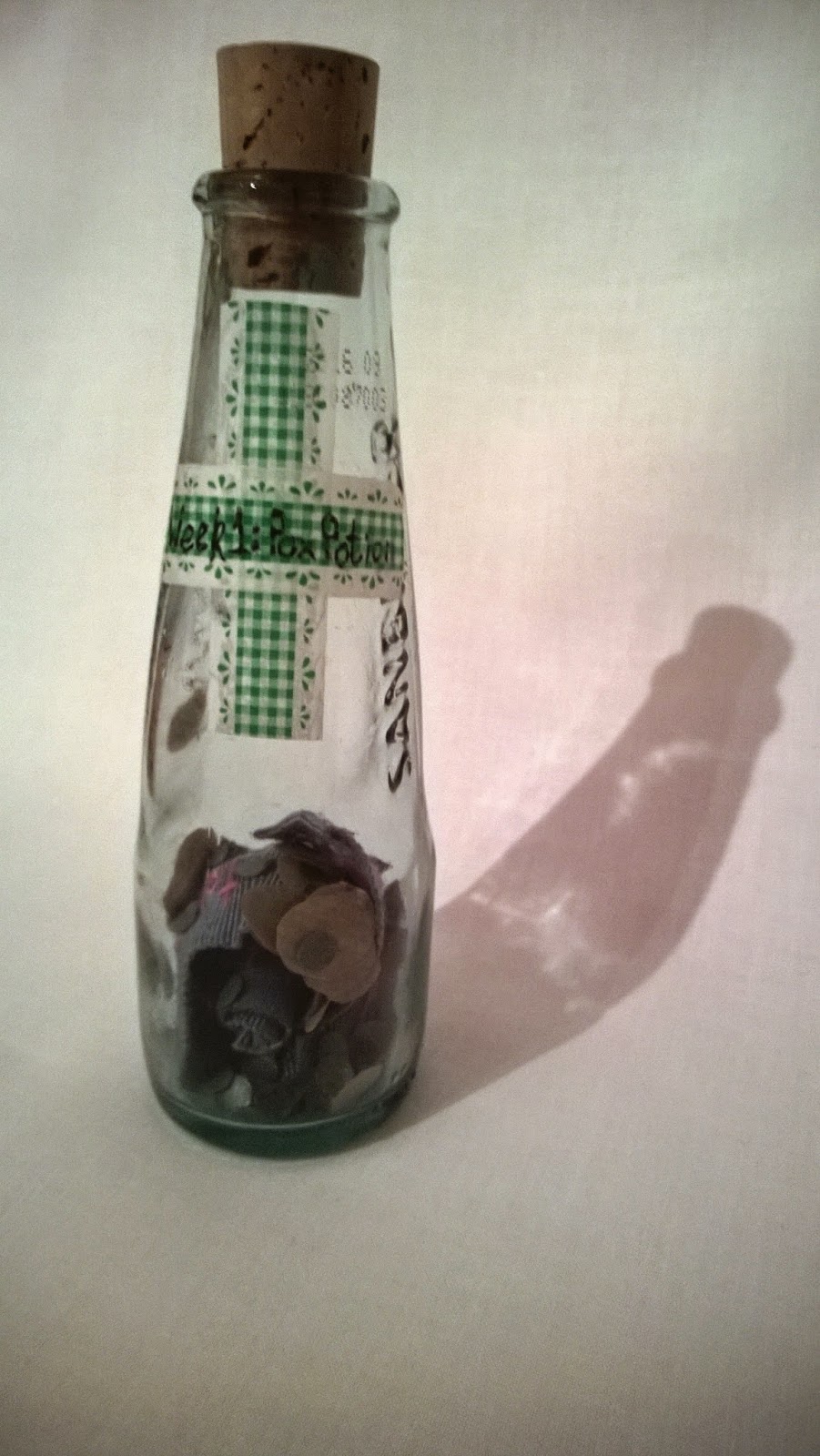 Posted by Kate Elisabeth Rolison at 12:31