Earlier I explained that, through Tangled Yarns, Alke Schmidt reminds us of the obscure and murky chain of supply in the textile industry. But it was ever thus; Tangled Yarns explores the (dirty) politics and morality of the textiles industry from the 1700s to the present day. And seemingly, little has changed. Though the chain of supply today may often be a mystery, in her work Stained Alke traces the mid-1800s supply chain from cotton plant to dress. She illustrates how a garment's origins, even then, could leave an invisible smear unbeknownst to the wearer. 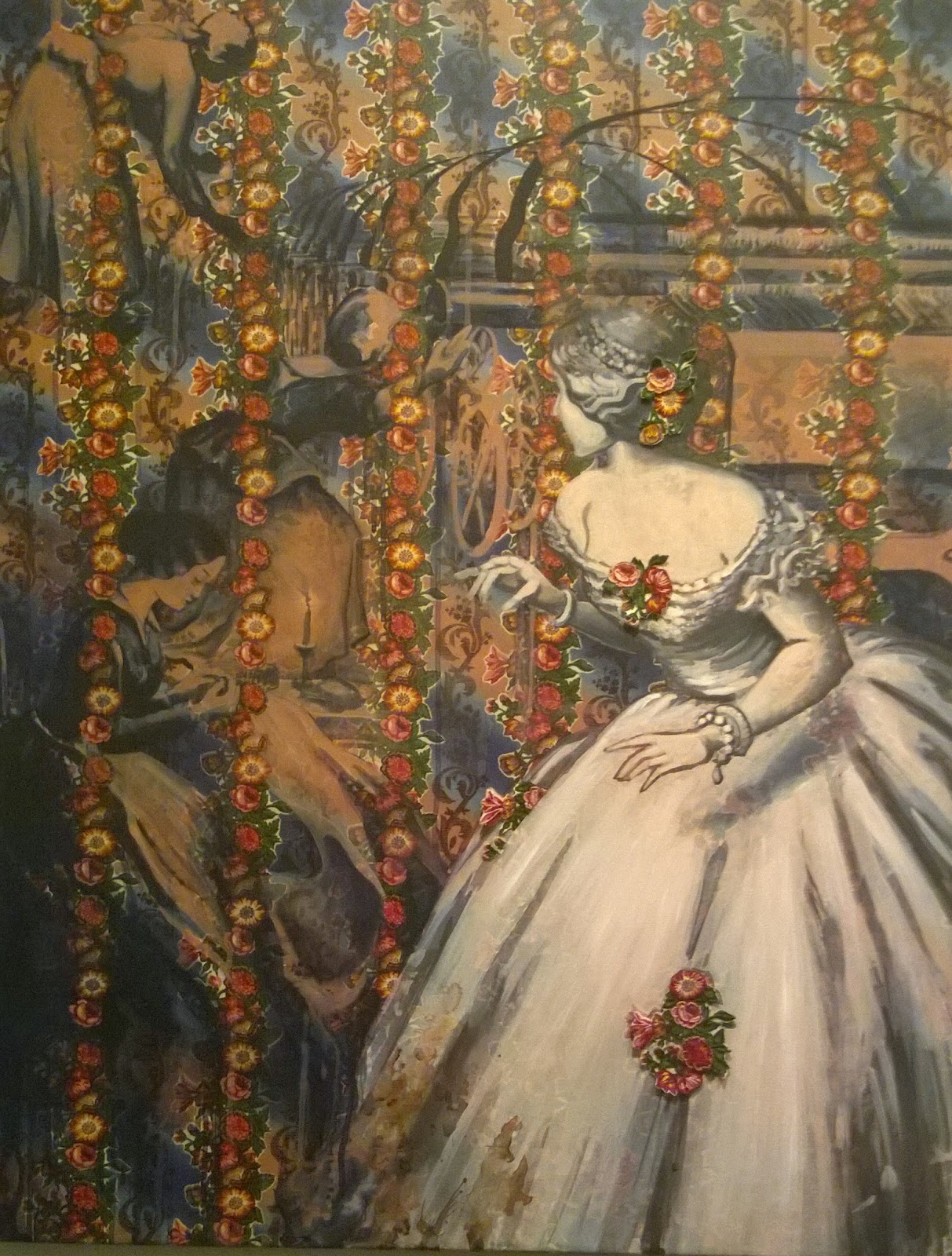 A wealthy woman in an elegant, delicate ball-gown peers through a barrier of columns of an 1840s cotton print which separate her from the women who clothed her. As with many of the works in the exhibition, cloth, stitch and paint weave in and out of each other, and composition says just as much as content. 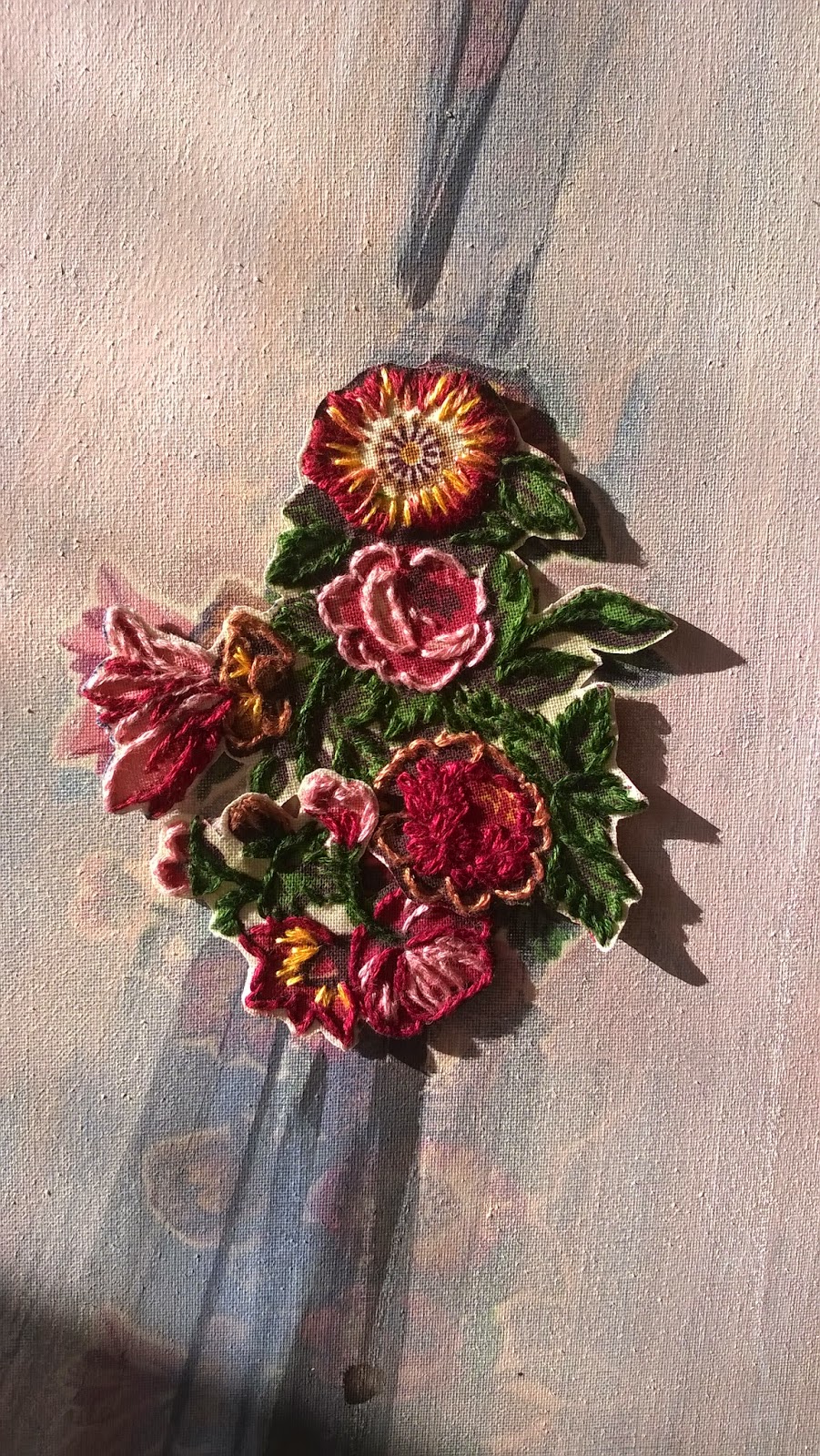 The women the elegant lady peers at are a plantation slave, a Lancashire mill worker and a cottage industry dressmaker. Each category of exploited worker became the focus of a moral outrage in the 1800s, just as the treatment of Bengali textile workers is now, and rightly so. Even the self-employed dressmaker working from home lived a meagre and often starving existence; there are accounts of cottage industry stitchers losing their eyesight by candlelight in the seminal text The Subversive Stitch.

Alke's dressmaker has dark circles under her eyes and stitches by a guttering candle; perhaps her eyesight, too, will soon falter. 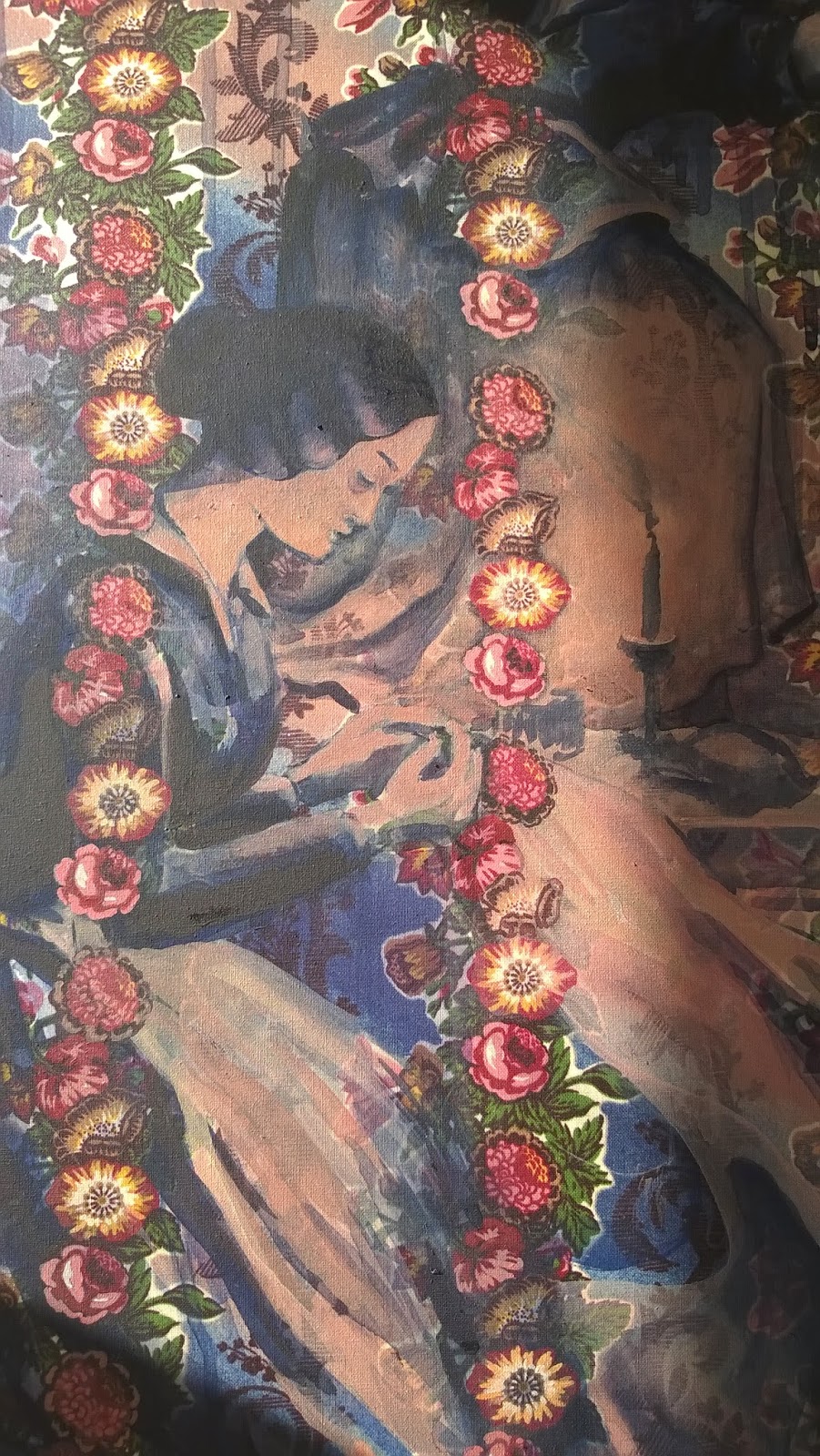 As Alke’s exhibition demonstrates, structural violence towards women permeates and has always permeated the textile industry. In around 1719, this violence become more overt, when, as Alke rather brilliantly puts it, some women became literal "fashion victims". British weavers were feeling increasingly threatened by the popularity of patterned Indian and Indian-imitation cottons. Rather than directing their resentment at the producers of such cottons, wool and worsted weavers took to the streets and began attacking women wearing garments made from the printed cottons. The attacks included ripping and cutting the cloth, setting it on fire, and throwing acid at the women to burn their skin. It quickly became a witch-hunt in which the recipient of the violence was not the clothes but the women wearing them. They were branded Calico Madams, the title of the piece in which Alke brings all these rich and subtle threads of research (or tangled yarns, if you like) together. 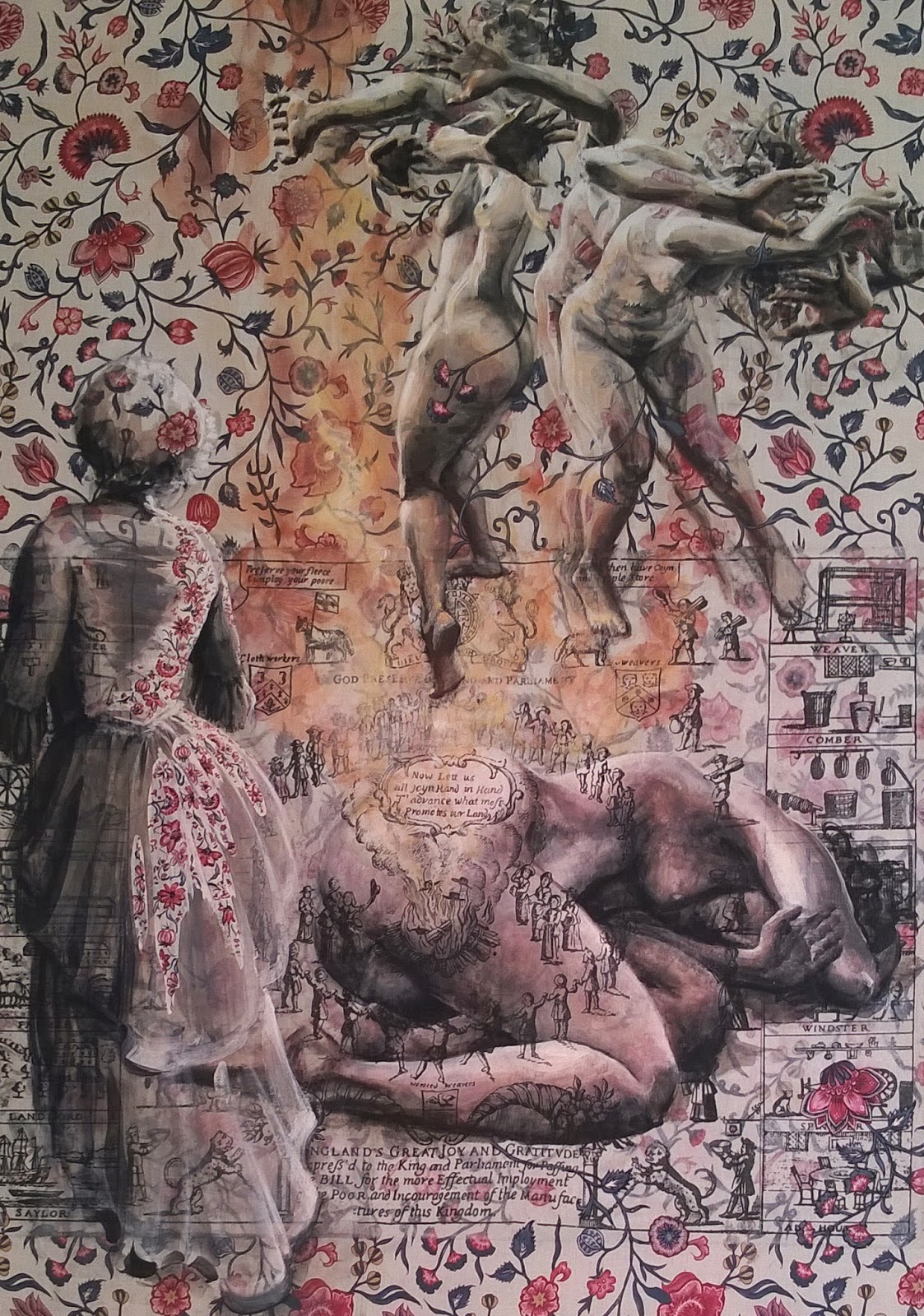 As her base Alke has chosen a calico in the style of early 18th century Indian designs. The next layer is a reproduction of an illustration from the period celebrating the passing of the ban on Indian cottons. Finally she has painted the "calico madams" themselves, fighting off their attackers and lying defeated on the floor, where the rump of a woman becomes the site of the cottons being "burnt at the stake", with flames flickering around and leaping up to assault the fleeing women. Of course, the phrase "calico madams" was a way of attacking women for their sexuality, and conflating this sexuality with the way they were dressed. Therefore the flaming pyre appears on one of the most sexualised parts of a woman's anatomy. 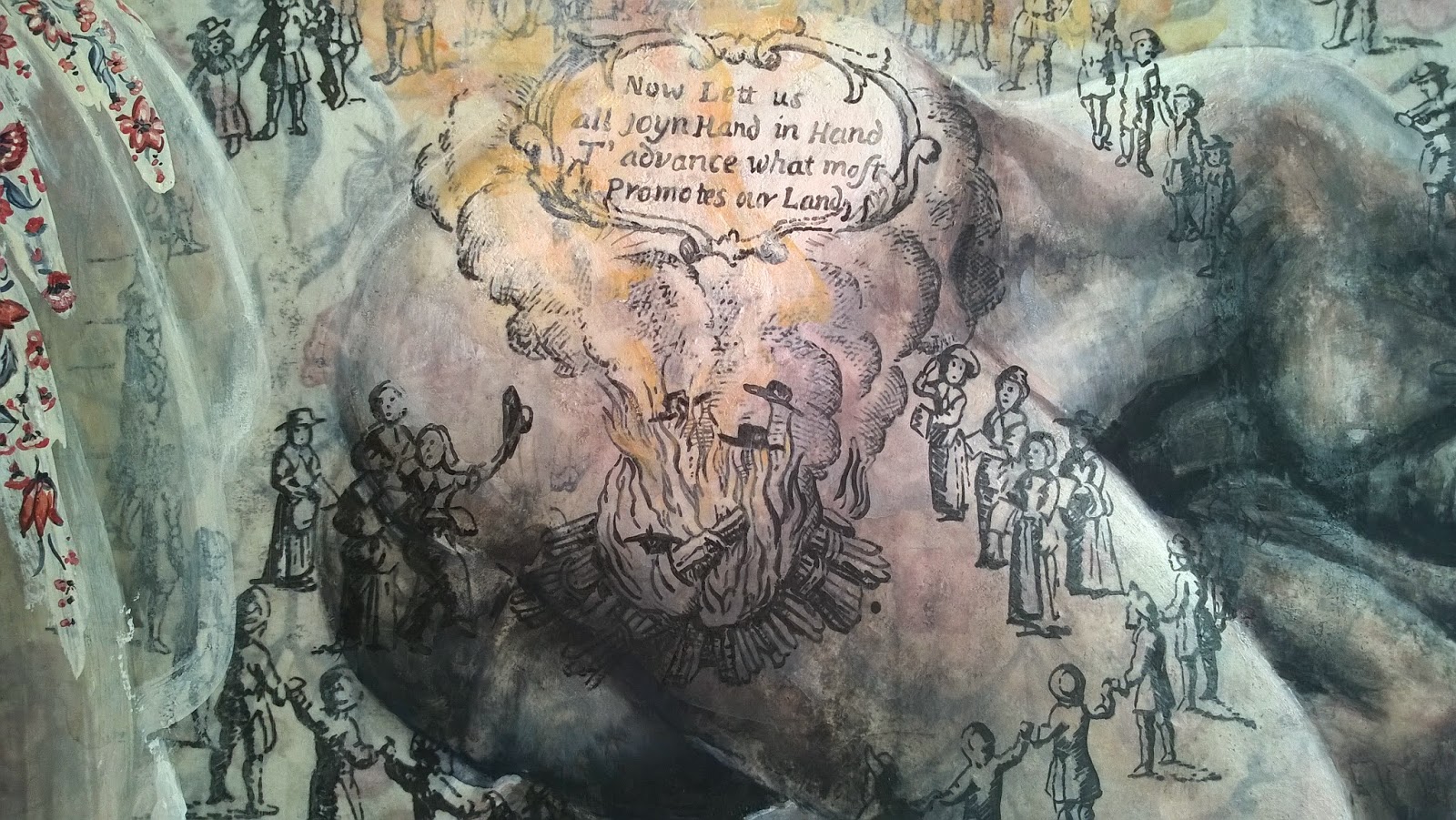 Calico Madams is one of the most technically accomplished and conceptually rich works in the exhibition. It is multi-layered both literally, with pattern, print and paint interlacing seamlessly in and out of each other, and figuratively, with countless threads of research woven together without over-burdening the whole. 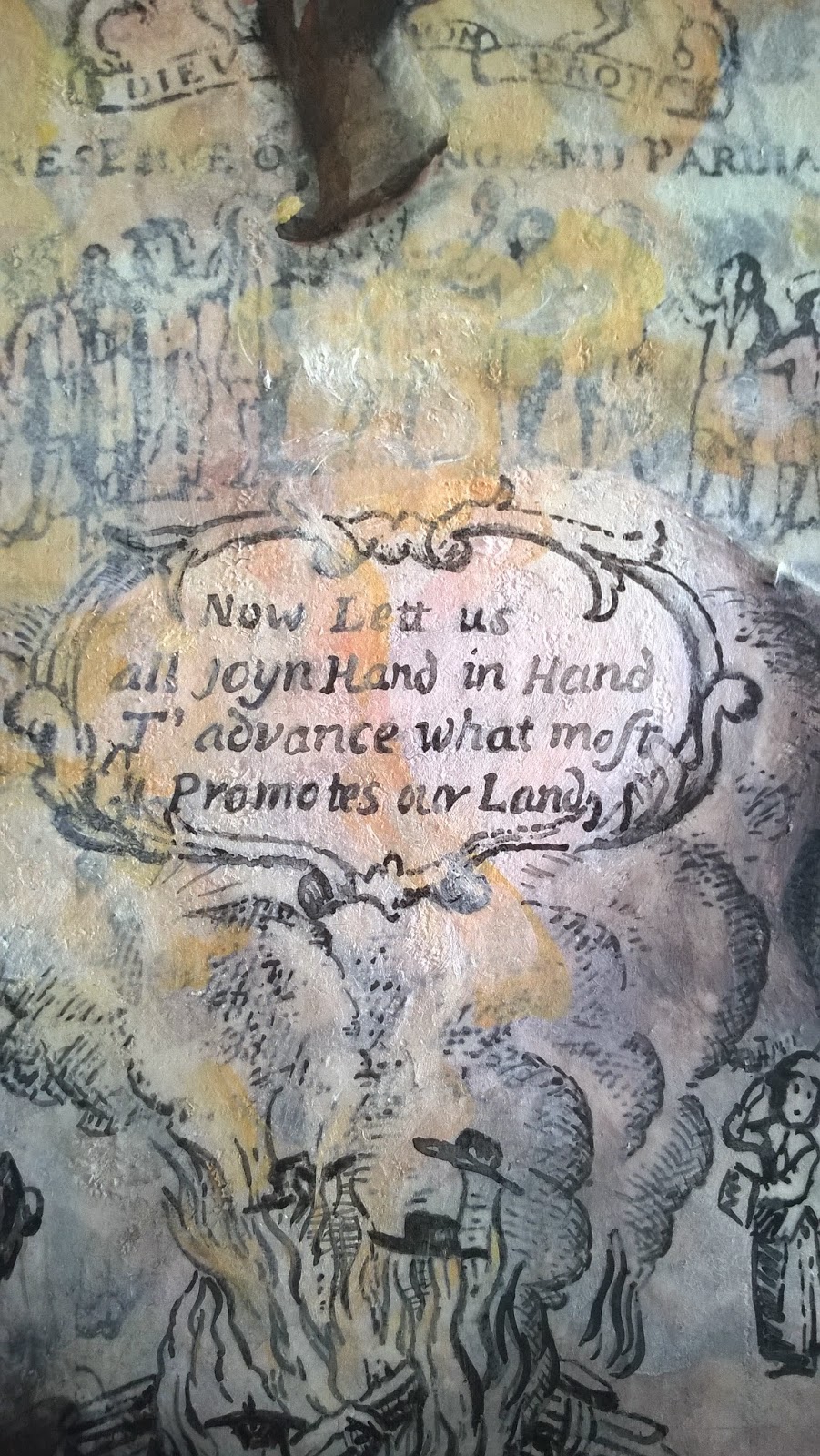 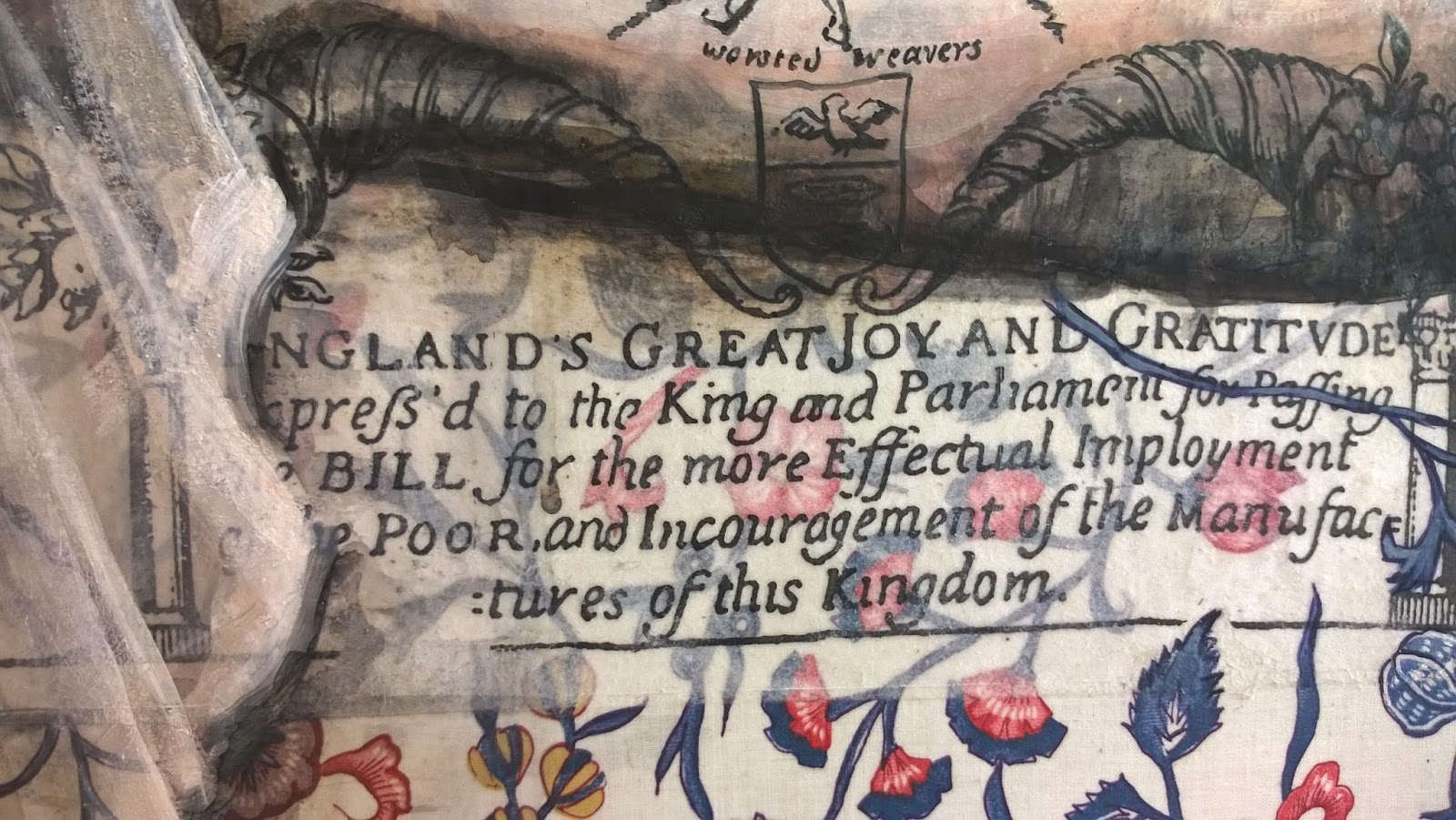 It gives me courage as an artist who sometimes worries that there's "too much going on" in her own work.

Tangled Yarns is an eminently apt title for this exhibition; it would be impossible to separate out the strands of race and gender, exploitation and violence with which the textiles industry is intertwined, and Alke doesn't attempt to. Instead, she explores how these strands relate to one another, in a triumph of intersectionality.

I have written about a handful of the works in the exhibition, and have spent almost two thousand words doing so. I hope this is some indication of how thought-provoking, conscience-pricking, and technically astute Tangled Yarns is. As a result of visiting the exhibition, I have chosen to make a real commitment to being an ethical fashion consumer. How many exhibitions cause us to transform our lives (and the lives of others) for the better? I would hazard a guess that it's not that many.

Tangled Yarns is exhibited at the William Morris Gallery until the 25th January 2015.
Posted by Kate Elisabeth Rolison at 12:09