The Beast and Me


It’s grey here I’d say 95% of the year, except from the odd stretch of summer when that cruelest London sun beats the tarmac bleached, a slightly lighter shade of grey on the Dulux scale. You can walk the long mecca of the market and hear a different tongue at every turn. You’re the only white girl on the bus. You’re the only one in colour who isn’t a construction worker. People work hard here. Hard. Know the meaning of money and you’re just a monied interloper choking on fishbones and white guilt in a Turkish restaurant.
Better watch out ‘cos here be dragons. Peeling off the bridge but beasts all the same.You’re comforted by hooded figures and their choke-chained hideous dogs as you walk the pigeon grey streets after hours. You ashamedly lick the slithery chicken off your fingers, not quite another tourist sent astray by Dickens. Sometimes you’re naked in your shiny doll clothes, all-too-often checking out, on the way to Hampstead Soho Greenwich Camden the South Bank Spitalfields. A  tourist in your own town, but The Stow’s home. It’ll grow on you, wait and see, it’ll absorb the you into me, become a simmering lazy primordial molasses ooze of far-flung spices and words words words. Sticky sticky sticky it’ll stick to your shoes and you won’t ever stamp it out.
Victoria Line, that’s my name, I write it down for you straight on the jerky trains of my name-sake in tiny cursive or tiny print, neat black always. I’m an auditor, an observationalist. I’m invisible and omnipresent, and I know what’s in your heart. It beats for this place, for “Perfect” Fried Chicken and all the 99p shops, for gum-spattered streets and the ancient house in the Village. You were born of the beast of east, spat out like gum on the pavement. 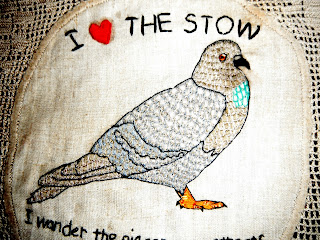 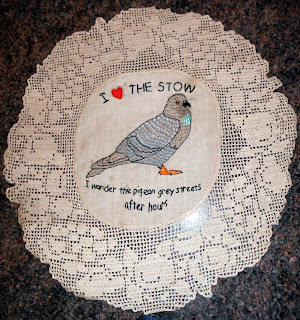 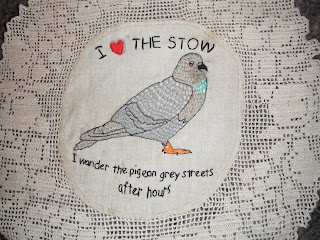 This is the first piece of writing/embroidery specifically about Walthamstow; the "loveletter" to "The Stow" which I promised.﻿
And what better to illustrate a piece on Walthamstow with than a pigeon, "the rat of the sky"? Huge flocks gather around the market every day in the hope of some left-over produce; in my mind they really seem to symbolise The Stow.
More on Walthamstow's arts and crafts scene, past and present, to come!
Posted by Kate Elisabeth Rolison at 08:06

Email ThisBlogThis!Share to TwitterShare to FacebookShare to Pinterest
Labels: doilie, embroidery, grey, hand embroidery, hand sewn, lace doilie, pigeon, The Beast and Me, the cure for love, The Stow, Walthamstow