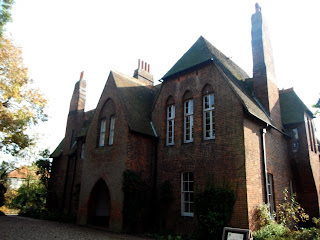 Today Mum and I made a mother-daughter pilgrimage to The Red House in Bexleyheath, Kent. The house was commissioned, designed and lived in by William Morris, and completed in 1860. It is one of the foremost examples of architecture of the Arts and Crafts Movement, but the main reason for our visit was that The William Morris Gallery here in Walthamstow is closed, and thus this was my only real chance to have a look at some original Morris textiles.

As soon as we entered the house we were met by an early example of Arts and Crafts work; stained glass windows with birds by Phillip Webb, figures by Morris' friend Edward Burne-Jones, and floral designs by Morris himself. Two of the figures depicted by Burne-Jones represented Love and a blindfolded Fate, holding the wheel of fortune.
In the first room of the house we came across the first set of textiles. A wooden printing block (which would have been used to print wallpapers and fabric) is displayed alongside samples of Morris, Marshall, Faulkner & Co.'s wallpapers and textiles.

The dining room contained the exhibit of greatest interest to me; an unfinished wall-hanging depicting Aphrodite worked in embroidery. The craftsmanship of the needlework and scale of the piece, though unfinished, staggered me. It is a beautifully realised piece, painterly, with exquisitely subtle shading and life-like texture. I hope to one day have the time to work on such a large scale (and with such skill)! The wall hanging is thought to have been embroidered by Bessie, the sister of Morris' wife, Jane. 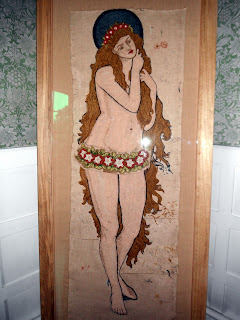 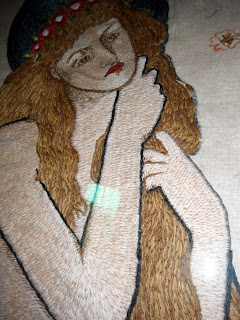 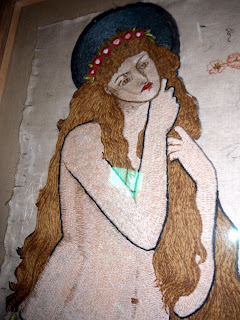 ﻿The house was filled with Morris, Marshall, Faulkner & Co. designs; in the dining room stood a table by Phillip Webb, and three chairs designed and made by the company. 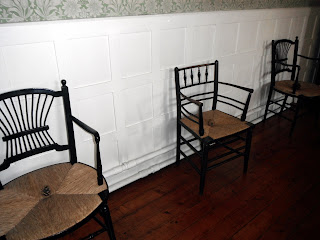 There is more needlework on display in Morris and Jane's bedroom; two tapestries, one a daisy design by Morris, originally completed by Bessie (but this reproduction sewn by The William Morris US Society) in couching (a technique in which wool is laid across the fabric and fastened to it with small stitches), and the other an elaborate embroidery in close stitch bearing Morris' favourite Chaucher proverb: He who loves best remember longest. This embroidery has been analysed and found to have been completed by one highly skilled needleperson and two apprentices.
﻿ ﻿We learnt from a tour guide that Morris was taught to embroider by "Red Lion Mary", the housekeeper of Morris and Burne-Jones' bachelor pad/student digs in Red Lion Square, London (of course, when Morris had mastered the craft he then delegated it to the women of the family! Embroidery has long been considered a "woman's craft"!)
Posted by Kate Elisabeth Rolison at 10:12

Email ThisBlogThis!Share to TwitterShare to FacebookShare to Pinterest
Labels: arts and crafts, textiles, The Arts and Crafts Movement, The Red House, The Stow, Walthamstow, William Morris