This is my penultimate collaboration with composer Joe Donohoe. This one, Bramble Snagged Heart, strikes a middle ground between Kiss the Book and The Alchemist; the text has some of the cynicism of the former combined with the earnest love poetry of the latter. With the sound of the piece, I was aiming for a recreation of the atmosphere of Walthamstow Village at night; therefore Joe used the sound of wind running through trees, traffic passing, and a church or clock bell. He also used the sound of cars beeping in traffic to highlight the phrases "terrified in headlights" and "roadkill on the motorway" We were also aiming for a "wintry" effect, which I think Joe has achieved through the guitar in the piece. He also created a "jarring" effect with the guitar which is played during the phrase "wolf bites down my neck", and then repeated for the line "I deep plum bruised".

I really enjoy the contrast of the three pieces; the first, with minimal music, used chord harps, the second, simulated tuned percussion, and this, the third, guitar.


Love is no mythical creature my dearest darling, but just before I stumbled into you I would stumble into blind backstreet alleys for the piss-promise of male, malingering company, for the price of cheap white rum, baptised, doused in the stuff, yet all doe-eyes and fuzzy-kneed, fuzzy knees, knees a-trembling, brand spanking newborn and just mewling out for love, terrified-in-headlights. Roadkill. O don’t you know that is how love feels now? Awake from shrieking sunbleached streaky sleep and roadkill on the motorway is more, more than beautiful. Life is more than bearable.
So, sweetheart:
Invent me, mark out my borders with your fingertips, write me into the periodic table. Name me after yourself.
All I ever used to want was his, oh hell, anyone’s wolf bites down my neck, inky keepsake emblems, and a spring in my step. Because I was brand-new, white and slippery as bathtubs and as yet unblemished... but... I bit off more than I could chew, I deep plum bruised. A bathtub heart covered in hairline cracks. So I prayed to no one in particular;
(Lord) give me a hundred denier heart
To keep the cold out
To keep lost souls out
And never let it ladder on no fences
(And when it’s held up to the light
Let it show no ladders)
Except...
You snagged on my thighs and tugged me to attention,
Snuck
Into my heart,
My opaque winter heart, suddenly
Unstoppered
It
And
To my surprise
What a gentleman you proved
I am no lady but
I only want a gentleman
And a gentleman
Is what I’ve found. 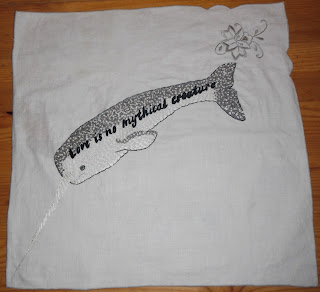 For﻿ the accompanying embroidery, I illustrated one of the opening lines of the piece, "Love is no mythical creature". I chose to illustrate this phrase with a narwhal, as in the Middle Ages narwhal tusks were believed to be unicorn horns. Unicorns are mythical creatures; narwhals, however, are not, and neither is love (despite what the cynical amongst us might have you believe).
This phrase is also a reference to Tao Lin's short story Love Is A Thing On Sale For More Money Than There Exists, which contains the following quote: "Though if love was an animal, Garret knew, it would probably be the Loch Ness Monster. If it didn’t exist, that didn’t matter. People made models of it, put it in the water, and took photos. The hoax of it was good enough. The idea of it. Though some people feared it, wished it would just go away, had their lives insured against being eaten alive by it." 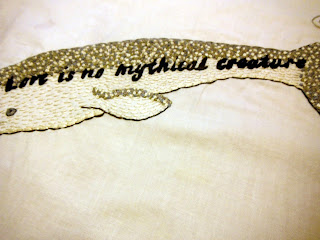 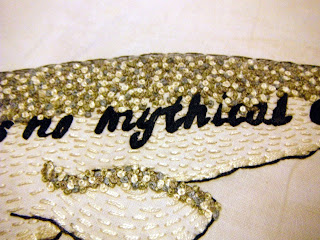 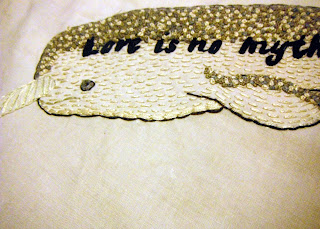 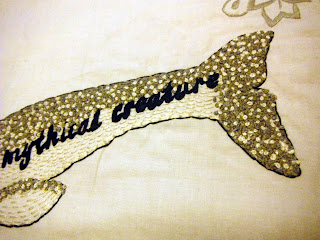 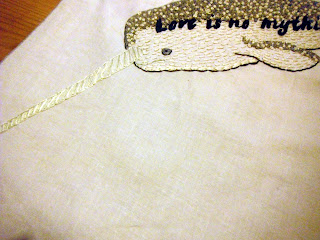 I used French knots to create dense texture and the spotted pattern of the narwhal's﻿ back.
Posted by Kate Elisabeth Rolison at 09:39