A Champagne (yet right-on) Socialist, and some blokes who sew

According to a 1908 biography of William Morris I picked up on my trip to Brighton, Morris (much like me) was "a born romantic". However, his romanticism was applied to "the hard facts of life"; he channelled his "sense of wonder" and "passion for beauty into the making of beautiful things which were eventually to become the starting-points for the wonderland of a new civilisation: in a phrase - the discovery of the romance of work." In short, Morris yearned for a socialist utopia in which great pleasure and pride was found in every type of work, and (in particular) in the decorative arts.

This love of work is evident in, I think I can safely say, all the minor masterpieces of arts and crafts design that Morris and Co. produced.

Morris wasn't merely a romantic artist and designer, however; as an article in the Socialist Review put it, he was "a socialist by design". He wrote pamphlets, gave speeches, edited two socialist newspapers, and was one of the first to join the Social Democratic Federation, in 1883.

In keeping with his socialist principals, "William Morris even envisaged a time when the sexual division within the domestic arts would vanish for ever. He anticipated the day when 'the domestic arts; the arrangement of the house in all its details, marketing, cleaning, cooking, baking and so on' would be in the hands of everyone"

In many respects, his dream has become a reality; no longer do domestic duties appear to be divided (quite so) strictly along gender lines. However, my dad may do the bulk of the ironing, but the cooking is still Mum's "job"; Dad lacks the confidence to try cooking anything more adventurous than his famous "baked bean shepherd's pie" (it's a culinary... experience).

As far as craft is concerned, more men do seem to be turning to the needle, although gender lines are more rigid here; Mum may do the majority of the DIY, but, at least in my household, it's the women who darn the proverbial socks.

"Manbroiderers" of the Jamie "Mr X Stitch" Chalmers ilk are trying to change this. I suspect the upsurge in male embroiderers is due to a few factors; the "invention" of the "new man"; the current vogue for all that is analogue and twee; and a similar vogue for the ironic and post-modern.

Throngs of men embroidering at craft nights, however, is something that, unfortunately, I've yet to see. It would be encouraging to have some brothers-in-arms!

After all, there's certainly nothing effeminate about Chalmer's work; one of his most recent undertakings was a series of cross stitchings of the spam filtered out of his inbox, including the ubiquitous invitations to "sharpen your love sword"! 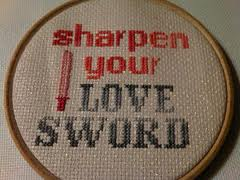 Richard Saja and "Johnny Murder", founder of the Manbroidery blog here on Blogger, are fellow male embroiderers. ﻿
A section of male society who have taken to embroidery in force, perhaps surprisingly, is prisoners. Fine Cell Work is a charity which aims to "foster hope, discipline and self-esteem" through teaching British inmates to hand embroider. Their embroidery is then turned into cushions, bags, and patchwork kilts. The prisoners are paid for their work, and trained to a high skill level by volunteers from the Embroiderers and Quilters Guild, as the photographs below show:
﻿

The enterprise is clearly vastly rewarding for the prisoners; Steve, an inmate at Wandsworth prison, is quoted as saying that he is "learning a new skill" which he "did not think possible. I also know that people do care about me and what I do because otherwise why would people take an interest in my fine cell work! I now believe what others think about me makes a real difference to how I conduct myself.”
However, it would be wonderful to see some more embroidery by un-incarcerated men! Come on guys! Get stitching.
Posted by Kate Elisabeth Rolison at 11:11