My mum flagged up last Saturday's omnibus edition of Woman's Hour for me, as there was some interesting discussion about the role of craft and creativity in women's protest movements.

Beginning with brief interviews of female members of the current protest camp gathered outside St Paul's Cathedral, Jenni Murray spoke with Dr Deborah Thom, (Fellow and director of Studies for the faculties of History and Social and Political sciences at Robinson College) and Ann Pettit (a founder of the Greenham Common camp)about the history of women's protest.

Greenham Common Women's Peace Camp came into being on the 5th September 1981, when the Welsh group Women for Life on Earth marched to Greenham Common in Berkshire, with a view to challenge the RAF's decision to site nintey six Cruise missiles there. When the women were denied a debate, they set up camp around the military base, with only a nine mile fence seperating them from the base itself. They were joined by more women, and the protest (and camp) lasted for nineteen years.

On Woman's Hour, Ann Pettit described how, at Greenham, women came together to transform the nine mile fence into a work of art and a site for protest, embroidering and weaving into it.

﻿Dr Deborah Thom went on to explain that this creative spirit was also present in the Suffrage Movement, from embroidered banners to smaller-scale embroideries and knitting.
﻿﻿﻿﻿
I have written before about how embroidery was employed by the Suffrage Movement for a subversive cause, and later reclaimed by the Feminist Movement in the 1970s. Domestic handicrafts had long been considered just that; merely domestic "women's work", and not "high art". Many feminist artists of the 1970s set out to challenge this notion, transforming this "women's work" into "high art", embracing the femininity of craft, "shedding their shackles, proudly untying the apron strings—and, in some cases, keeping the apron on, flaunting it, turning it into art" (Lucy Lippard, Household Images in Art).

Miriam Schapiro was one such artist who embraced femininity through her art. In the 1970s she began creating sewn collages from scraps of fabric which she christened "femmages"; these femmages recalled the woman's craft of quilting. In fact, Schapiro wrote of her femmages that she "wanted to validate the traditional activities of women, to connect myself to the unknown women artists who had made quilts, who had done the invisible 'women's work' of civilization. I wanted to acknowledge them, to honor them."
﻿

Schapiro was also involved in the Womanhouse exhibition of 1972; an installation and performance space situated in a deserted Hollywood mansion. Each participant in the exhibition was given her own space in which to operate inside the building. The exhibition was conceived by Schapiro and her colleague Judy Chicago (together the pair founded the Feminist Art Program at the California Institute of the Arts). The exhibition explored the concerns and mundane stereotypes of female existence; from the household chores of washing, ironing, cooking and sewing, to menstruation (as in Chicago's Menstruation Bathroom). It makes me a little sad to think that I'm too young/live in the wrong part of the world to have experienced this exhibition!


The reclamation of craft for political purposes by women continues into the present day through the Craftivism Movement. Reading up on Craftivism on the internet, the ubiquitous Wikipedia reminded me that craft has long had links with subversion, even etymologically; firstly, in the Old English, the word craft actually means "power, physical strength, might"; a far cry from the "passive, gentle" feminine craft as envisaged in the 19th Century! Also, as Wikipedia points out, "to call someone crafty is to identify them as clever and cunning. In Greek, one would say to “spin” a plot. Similarly, the French word for trick is tricoter, which means to tie or knot together".

Craftivism is closely linked with Third Wave Feminism and the Riot Grrrl Movement, and continues the practise began in the 1970s of reclaiming craft for subversive aims. In Craftivism, crafters take the traditionally domestic pasttimes of, for example, crochet and knitting, and bring them into the public sphere. For example, on May 23rd 2006, the Anarchist Knitting Mob held a Massive Knit in Washington Square Park, New York, in remembrance of Jane Jacobs, an activist who helped prevent the construction of an express-way through the park. The participants covered every possible surface with brightly coloured yarn.
I don't think it would be possible for me to conclude a blog post on craft and feminism without writing about Tracey Emin. During my A Levels I wrote a dissertation on text in feminist art, which featured Emin rather heavily! I have written about her before on this blog, as she explores the theme of this project (love) through writing and sewing. Emin may have the Marmite effect and be known almost more for that famous appearance on Channel 4 than her art, but she undeniably considers herself a feminist and I would argue that she is one. 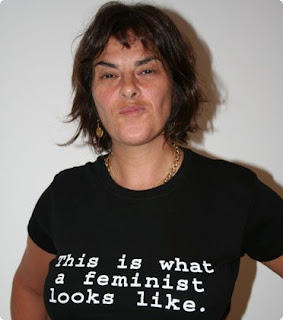 Despite the often raw and unsettling aesthetic and subject matter of her work, the materials and colours Emin chooses to produce it in are often described by the media as “feminine”(though arguably this is a somewhat hackneyed term the art world tends to use when describing the work of any female artist). Like Miriam Schapiro, Emin recalls the lineage of woman's craft through her hand-appliqued blankets; they are not dissimilar to quilts. Also like Schapiro, Emin's aesthetic is (like her subject matter) raw and unpolished; in this way she subverts the femininity inherent in craft.
﻿﻿
﻿

In subject matter, too, Emin is a feminist artist; she records the experiences of her emotional life as a mirror by which to reflect the human (and, in particular, the female) condition. In my opinion, having visited her most recent exhibition, Love Is What You Want, Emin’s work has a universal value, rather than merely being an indulgence of the artist’s narcissism, as many critics have derided it as; many if not all women would be able to relate to the emotions expressed in one of her blankets. She certainly carries out the old feminist rallying cry of "the personal is political".

Emin follows in another female lineage, this time a feminist one; like the feminist artists of the 1970s, she has said that she does not use embroidery "like a craft, but like high art".

Posted by Kate Elisabeth Rolison at 09:06