"A Disparate Patch-work" - Writing and Sewing 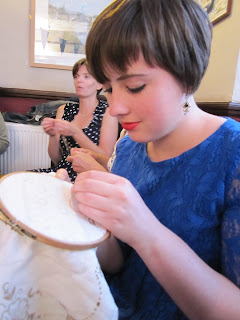 In her essay Sew to Speak: Text and Textile in Eudora Welty, Geraldine Chouard describes the process of writing as "editing "with needles and pins," shifting and assembling textual fragments, in a fashion very similar to patch-work quilting."

Indeed, it could be said that my own writing practise is akin to "patch-work"; I have assembled the texts I have used in The Cure for Love out of various "scraps of material" garnered from different poems and short stories.

Not only that, but the various art forms explored throughout The Cure for Love (text, sound art, embroidery, and, in the near future, video) are combined together into a "patchwork quilt", comprising the project.

I almost always write, like Chouard, in "strips - paragraphs here, a section of dialogue, and so on."

Chouard goes on to explain that "A text is always a second-hand piece, made of words which have had a life of their own in previous arrangements, as are the fragments of a patchwork quilt which have served other purposes and which, stitched together in a particular fashion, form new patterns."

I concur; to paraphrase Cixous, when we write, we collaborate with all writers who have gone before us; all texts; all language.


The "speech" which the "I who writes gives (...) to all the other Is" is thus the canon of writing passed down to the "I who writes" over the passage of time. Through drawing this conclusion, Cixous arrives at an ideology in her own writing of never asking herself "who am I?" (qui suis-je?)", but instead asking herself  " “who are I?” (qui sont-je?)"
All writing, therefore, is patch-work.
Posted by Kate Elisabeth Rolison at 04:09