As a habitual pessimist and anxiety queen, I have recently begun keeping a record of one good thing from each day, to remind myself that actually, my life is pretty darn good.
I've also been indulging in an incredibly childish (and mildly embarrassing) practice; giving myself reward stickers.
A few months back, on the advice of friend, collaborator and fellow artist Hannah Hill, I started keeping a record of daily to-dos and achievements as a means of patting myself on the back (something I'm often not very good at) and as an impetus to get stuff done. I nicked Hannah's idea and added reward stickers, and as I noted at the time, self-imposed bribery to do things via a stickers-based reward system worked (un)surprisingly well. Yes, I am a child.
There's something about gold reward stars in particular that is incredibly crave-inducing; they must be engineered that way. Maybe its my innate and irritating perfectionism, mixed with nostalgia for primary school, I don't know.
Anyway, in homage to the humble gold star reward sticker, I wanted to make a series of work celebrating the minor achievements of us bumbling humans as we muddle our way through life, making it up as we go along and getting bumps and scrapes which (hopefully) only serve to make us a little bit stronger... I'm bumbling myself now.
I'm tentatively calling the project Treasures For Your Troubles, which is what the first embellished piece of the series spells out, in (what else) golden star sequins.
﻿ 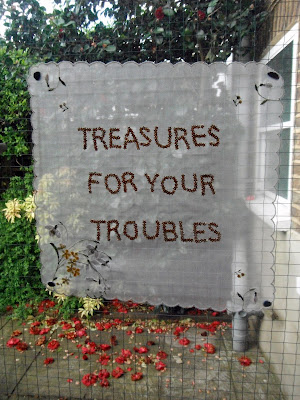 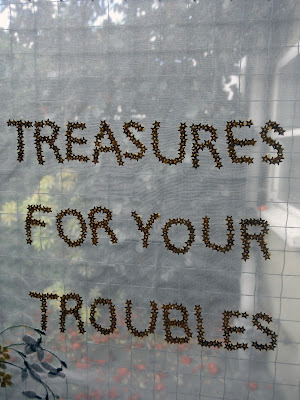 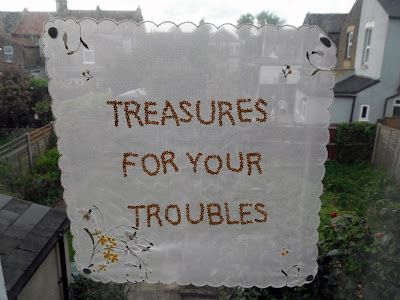 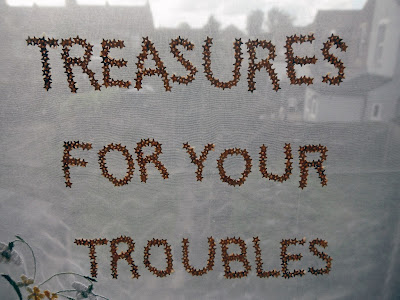 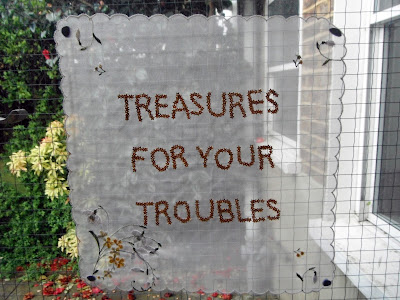 The next element of the project (which will be a multimedia undertaking) will be accomplished with the aid of my trusty old Polaroid Spectra camera, and some Impossible Project film which I was happy to find had arrived when I got in from work this evening. Now if only we'd have some good weather, I could get on with it! Just one of the (very minor) obstacles in life the project is all about overcoming.﻿

Posted by Kate Elisabeth Rolison at 10:26