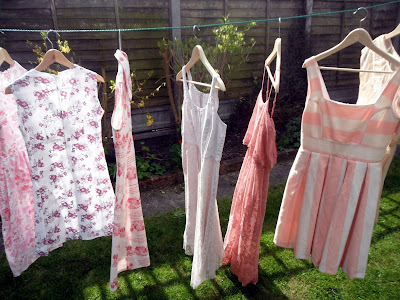 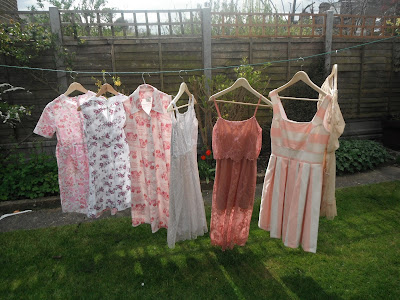 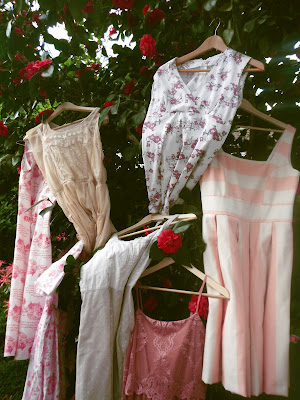 When we were kids, one of my brother's favourite colours was pink. I, on the other hand, loathed it; a rebellion against the ubiquity of the colour for little girls, and a loyalty to my tomboy nature (I was the girl always climbing trees and enthralled by creepy crawlies). Where did it all go wrong? Why do I now own at least seven pink dresses, and am happy to be snapped prancing around in a salmon candy-striper frock? 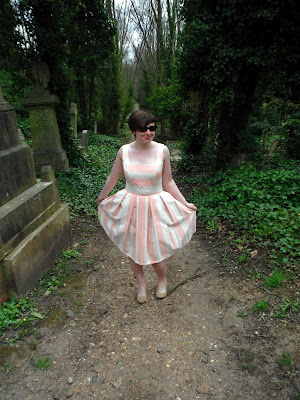 My parents tried all they could to evade gender stereotypes (my beloved bright yellow Tonka truck attests to that), but it seems I've waltzed right into one; I've turned out decidedly girly. And what do I blame this disturbing phenomenon on? Why, on the young modern feminist art movement, of course!

Tumblr is awash with young feminists "reclaiming their girlhood"; as Beth Siveyer, founder of Girls Get Busy, writes in the fourteenth issue of the zine, "I can be strong and feminine, and it doesn't matter what people think (...) I'm 24 years old and I'm finally ready to be pretty in pink." 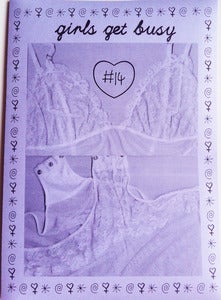 When I was discussing this with my Mum the other day, she commented that she'd recently had to buy some gardening gloves for a group of young people she would be working with. The gloves came in two colours; pink, and blue. In the end she had to go with the blue gloves, because, she conceded, the boys in the group simply wouldn't wear pink gloves. I'm inclined to think that this would not be because of an aversion to the colour, but an aversion to what the colour represented; an aversion to perceived femininity. Why is femininity so reviled? Why is "stop being such a girl" such a terrible insult?

I would hazard a guess that it's because, historically, women have been the second sex, subjugated and weakened by a patriarchal society determined to keep men on top. This has lead to the impression that women themselves are intrinsically weaker, and so "feminine" behaviour is a sign of weakness. One need only take a glance at the Everyday Sexism Twitter feed, a deeply depressing but vital read, to realise that we are a long way from gender equality, and that a culture of "keeping women down" is still a very real and present danger (and I don't use that word lightly).

But, as Beth Siveyer writes, femininity can be a source of power. So too can pink. It is an audacious colour, a passionate colour, a sexual colour. A colour as varied as women themselves.

However, pink can also be nauseating. Case in point, that ubiquity I mentioned; now more than ever, it seems there's almost no other choice for little girls than pink clothing, accessories, toys... the list goes on. As this article notes, "All the other colours of the rainbow will be washed away in an unending saccharine sea."

The backlash to this trend has resulted in the Pink Stinks campaign, focusing on combating the "dangerously narrow definition of what it means to be a girl" and the ways in which "pinkification" of girls leads to sexism and gender stereotyping, and an obsession with consumerism and body image.

In my opinion, this is most certainly a laudable cause, though the name of the campaign does sound like an assault on the colour itself, rather than its use as a reductive marketing tool. A member of the modern feminist movement makes the suggestion (via Tumblr, of course) that the Pink Stinks campaign changes its name to Rethink Pink. Though this is a subtle change, I think it is a wonderful one; one can remain critical and aware whilst embracing the colour, that, for better or worse, has come to symbolise femininity. 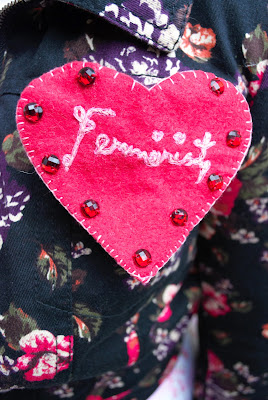 It was not ever thus; indeed, in the early 1900s in the United States, a trade publication proclaimed that "The generally accepted rule is pink for the boys, and blue for the girls. The reason is that pink, being a more decided and stronger color, is more suitable for the boy, while blue, which is more delicate and dainty, is prettier for the girl." It is interesting that here, pink is associated with strength, just as I posited that pink can be a powerful and audacious colour. However, strength is associated with masculinity and delicacy and daintiness is associated with femininity; why can't one be both strong and dainty? This combined strength and delicacy is what I feel I emanate when I choose to wear pink.

By a happy coincidence, one of my very favourite artist's thoughts on the matter chime precisely with my own. In an interview, Lily van der Stokker speaks about "the strength of pink curlicues"; there is strength in this apparently "weak" feminine softness.

But is it softness? For all its sweetness (indeed, because of its sweetness) van der Stokker's use of pink is nauseating, even abrasive. Pink can be harsh, abject, confrontational. It demands to be seen. Van der Stokker is certainly not ashamed of the femininity that pink implies, even if it horrifies the fine art bubble; she unabashedly proclaims girlyness to the world.

A show of strength indeed.

I too, am happy to proclaim my femininity to the world, and to prove that it does not make me weak but in fact stronger. Since becoming more involved in the young feminist art movement, a number of my embroideries have started to explore themes of feminine strength, defiance of  gender roles and societal expectations, and incorporate pink into their colour scheme as a symbol of this. 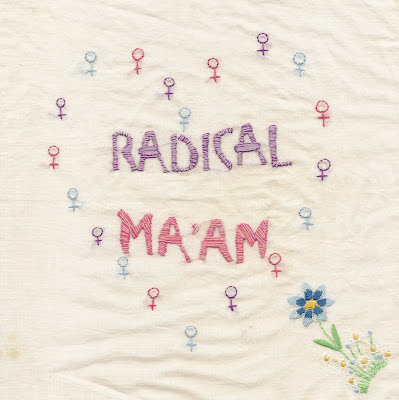 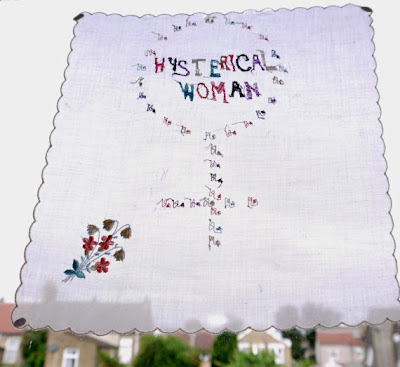 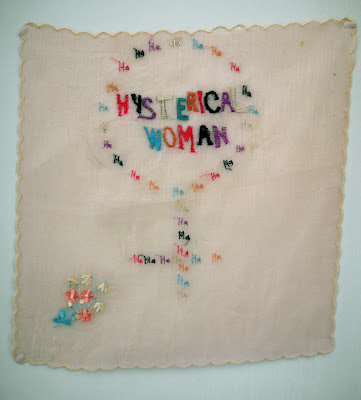 I will continue to wear pink with pride and as a reminder of my feminine fortitude; I too am ready to be pretty in pink.
Posted by Kate Elisabeth Rolison at 04:41