Interview with Lindsay Joy on her "Anxiety Series"

I did this interview with incredible fibre artist Lindsay Joy for a side project many months back, and since I've been chatting to Lindsay quite a lot on Tumblr recently, and following her work more closely, I thought I would share it here.


Lindsay is currently undertaking her Master of Fine Art at the University of Manitoba in Canada, and describes her practice as "scrambling attempts to feel better", which I'm sure all artists can relate to at one point or another!

Thank you so much for doing this honest, insightful interview, Lindsay, and thank you for letting me share it here. 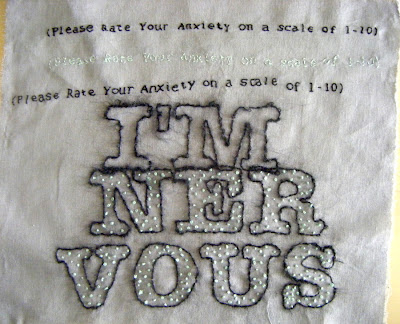 What prompted the Anxiety Series? On your website you write that you realised “the most helpful therapy was the act of sharing”. Was your hope that your Anxiety Series would offer comfort and a sense of empathy to others suffering with anxiety and social phobia?

I have always been an anxious person, but two years ago I started realizing how much it was affecting my life. I started seeing a psychologist during the summer before my fourth year of college.  One of her suggestions was to make contemplative art as a way to calm down. At first, I tried the usual stuff - journal entries, a painting, earnest assignments that were embarrassing to show anyone but her. I didn’t feel like they were helping; I was just making what I thought I was supposed to. Traditional “contemplative art” also suggests wacky new age stuff which, as a skeptic, I am completely uninterested in.  I picked up embroidery again after my grandmother passed away, which happened right about the time my anxiety was at its worst. We found some antique hoops in her apartment, and I was antsy, away from home, dealing with grief and needing something to do with my hands. I made a small piece called Matriarch, reteaching myself how to stitch after not doing it for a long time. Once school started up again and it came time to really develop my art practice in my final year, I decided to use embroidery to explore my struggle with anxiety.

When I first realized I had a problem with my anxiety, finding out that Social Anxiety Disorder is a real thing in the world (at least according to Wikipedia), I tried to tell a few people. It was a terrifying revelation, and for some reason sharing was helpful, because it meant it wasn’t my fault. THIS is what’s wrong with me, guys! THIS! I got some strange responses, though, probably because I didn’t tell the right people. I have a hard time negotiating personal relationships in that way. When I started making the anxiety pieces, it was like they were a surrogate for my own confession, and though I didn’t necessarily know the recipient and they didn’t know me, but I still got to tell someone how I felt. At first, I was actually surprised that other people could relate, especially people I knew.

Is there something about the juxtaposition or conflict between the cutesy or twee aesthetic of embroidery and the darker elements of your subject matter that you find appealing?

I’ve always found that juxtaposition intriguing. It makes my work feel less of a teen-angst expression and more self-aware. It’s also the fight in my own head, knowing that my thoughts are ridiculous but not being able to stop them. Reframing them with cutesy imagery, stitching and colours might create a sort of trap, drawing the person in from afar to view my detailed handwork, maybe expecting a laugh, but confronting them with the subject matter.

Why and when did you begin to embroider? What sparked your interest in embroidery?

I’ve always made things with my hands. My mother  knits, crochets, embroiders and quilts, to name a few. I was an only child, so she showed me a few things when I was bored growing up. I used it a few more times during my first and second year of art school, where I majored in fibre and tried a lot of techniques. I was drawn in by the way you could combine colour, texture and line, and the ease of image appropriation with the technique. With embroidery, it is easy to be direct. With a lot of other textile techniques, you are waiting for dyes or to thread your loom, and I can just start stitching something right away. I am impatient, although that’s probably an ironic statement. I love the history of hand stitching, which also has a history with mental health, often as a past-time in institutions.

Has making the Anxiety Series been a way of reaching out to others in the community? Have you been contacted by other sufferers?

I haven’t really been contacted by severe sufferers, but more from people who could relate to some aspects of the work, not necessarily having full-blown anxiety.

Was it difficult to put such an intimate and painful aspect of your personality on display? What was the public reaction to the Series?

It wasn’t difficult at first, because I began the series during school, and the fibre group was so small and intimate, that I didn’t feel afraid to do it. Once it started to reach a larger audience, I became a little nervous about it. During the graduating exhibition, I was too afraid to be near-enough to my grad piece for anyone to identify me as the maker. With the work, I sometimes have had better responses from strangers than people I was close to. I’ve received a lot of concerned, “But you shouldn’t feel that way,” comments from friends I had known for years, and bad advice for quick fixes. I incorporate some of that into my work, too. The hardest thing, now, is to explain when I meet new people who are interested in finding out what I do as an artist. I think they have some degree of skepticism, like, “How can you be anxious?  You are talking to me now!” or something. The funniest thing was a classmate called me up to ask about an assignment, right after she had seen me working on the phone piece. Halfway through the call, she said, “Oh no!  You hate talking on the phone!  I’m so sorry!” It’s a little weird having people know those things, sometimes.

Was the act of confession, together with what Joetta Maue calls the “quiet, meditative act” of embroidery, therapeutic?

It started out as the intention, although the anxiety is always there. A few people have assumed that since I’ve made the work, I’m anxiety-free, which is kind of weird. The work is definitely a temporary fix.  Thinking about what thread to use next and where to put the stitches sometimes helps when I’m thinking too much about useless things.  It keeps my mind occupied.
Posted by Kate Elisabeth Rolison at 11:34