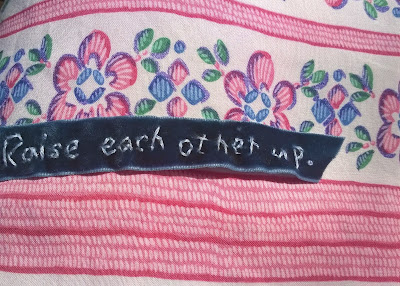 I've had what could best be described as "a funny old week". My Twitter, if it didn't blow up, certainly had a very tiny controlled explosion, resulting in being approached for commissions and sales, which is always lovely. I haven't made the best use of Twitter in the past, but I'm certainly making up for that now, and all in all I think I've had a bit of a social media overload. Pip was away, and on Thursday, when I had the polling station, a double bill of performance curated by Daily Life Ltd, and First Aid Training to get to, I, rather embarrassingly, became the practical demonstration at said training. I'm not even good with descriptions of blood, and felt so fragile and rotten that I didn't make it to the performances that evening. Just before I went to bed the possibility of a Tory majority government was beginning to look likely, and I had a terrible tension headache from my visceral reaction to mentions of blood.

On Friday morning I felt hungover and funereal with the election result. I think I'm not the only one who's still in a certain amount of shock.

Thank goodness, then, that I had a second Daily Life Ltd ticket for their cabaret evening on Friday. I was late and flustered to the event, but within two minutes of walking through the door, I felt better.

Poets associated with F.E.E.L. (Friends of East End Loonies) performed a rollicking variety of texts, from the elegiac to the ethereal to the positively zinging with all the "madness" of life. Listening to them made me want to get up in front of a microphone again, which I haven't done since I was fourteen.

But the two highlights for me were Simon Raven's "basket unweaving", a witty riposte to the busymaking distractions of  mental hospital mandated "art therapy", and Bobby Baker's Ballistic Buns.

Bobby told us the story of her grandfather and grandmother, extraordinary individuals who met in the early twentieth century. Her grandfather, a "senior angler" or Oxbridge mathematics superboffin to you and I, was tasked with creating the British answer to "Big Bertha", an enormous mortar gun used by German forces in World War One. He never forgave himself for the devastation his engineering engendered. Her grandmother was from a wealthy background, hardly ate a thing, but, much like Bobby, loved feeding people.

One of Bobby's abiding memories of her grandmother was of sitting at the dinner table, when her granny would suddenly shriek, "Catch!" and pelt rock hard home baked buns at Bobby and her siblings.

As Bobby was a tomboy (believe it or not, so was I at the age of ten), her favourite film of the time was Dam Busters.

Thus, in homage to both her grandparents, whilst footage from Dam Busters scored by the Ukulele Orchestra of Great Britain played, Bobby pelted her captive audience with (mercifully soft) Madagascan vanilla buns. And, as Bobby demonstrated her pitcher's arm in a curiously balletic style, all the tension which had been building up in me over the course of the week bubbled up and overflowed into uncontrollable belly laughs. The laughter, as Alice of Daily Life put it, of jouissance. Just what the doctor ordered.

It made me think, as I have often privately thought before, that it's ok to be a bit mad. But here was collective, joyous, jouissance madness.

I felt buoyed up, and all these thoughts have led to the embroidered words of this week's #secretsofselfpreservation potion; "Raise each other up."

I refuse to despair in the face of another five years of Austerity Britain. I refuse to silently seethe, to grow complacent or apathetic. I won't stop working, however much arts funding is squeezed, however much the rug is pulled out from under vulnerable people. I will do my bit.

I wasn't quite sure what diaristic elements to include alongside the words, so Pip had the excellent idea including collage elements of the stack of Labour party literature he'd accumulated. I simply cut out the words and phrases which seemed most pertinent. 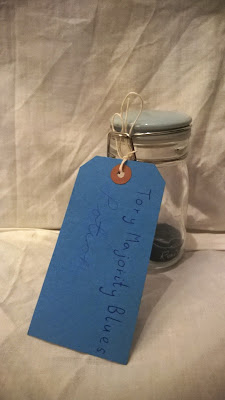 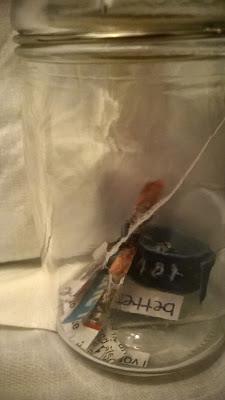 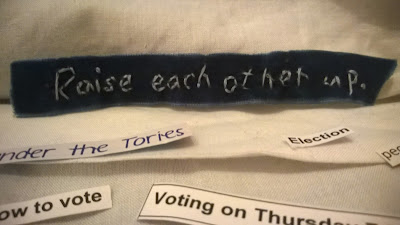 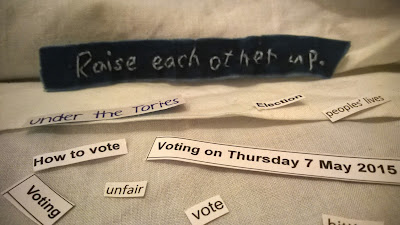 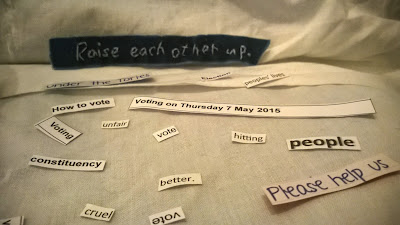 Remember you can get involved too, via the hashtag #secretsofselfpreservation, by writing about a simple way you plan to, or already do, take care of yourself. Alternatively, you can create your own embroidered (or written on paper) potion - just remember to include the hashtag #secretsofselfpreservation along with your snaps of it.
Posted by Kate Elisabeth Rolison at 14:52