Today I had arranged to go to Chinatown with some friends, but they cancelled (due to perfectly valid reasons). However, nothing can come between me and dim sum, so I went by myself. It may not seem like much, but I felt like it was an important step, and demonstrates just how comfortable in my own company nowadays; there have been times in my life when I haven't been able to go out at all. There have been other times when I have gone to a restaurant and embarrassed my significant other by wolfing down my food and hightailing out of there, so convinced in my paranoia that other diners and staff were watching and talking about me, and could somehow tell there was something wrong with me just by looking.

Today I spilt half a cup of tea on the tablecloth, mopped it up with a napkin, and thought no more of it. And yes, that does feel like an important step.

I have been thinking a lot about mental health this week, as well as food. On Monday I went to an "expert advisory day" organised by the delectable Daily Life Ltd. Daily Life is an arts and mental health organisation collaborating with, and co-producing the work of, individuals and artists with experience of mental distress. Daily Life is headed by Bobby Baker, an artist about whom Nigel Slater said "I would go without food for a week just to get a ticket for her next show". I'm inclined to agree with him. I have been lucky enough to have been invited along to a couple of Daily Life events since first seeing Bobby and Co. present Mad Gyms and Kitchens back in 2012. I have written about the Experts By Experience workshop, run in collaboration with Jake Spicer of Draw Brighton here, and the resulting exhibition, The Expert View (in which a teeny weepy drawing by yours truly featured), here.

The purpose of the expert advisory day was for Daily Life to bring us up to speed on their activities and ambitions, to discuss language and the media around mental health, strategies around being a mentally ill artist and getting work out there, quality control in disability arts, and finally to share our work with likeminded (obviously in more ways than one!) peers.

It didn't take long for my blood to boil. This was brought on by our discussion around representation in the media. I was glad to hear that Bobby, as well as many of the other artists and activists present, feel a sense of disparity between all that we can offer as people with varied and unique life experiences (which often lead to us having a greater sense of empathy and social justice, as well as providing a rich seam of strikingly original ideas and creativity), and media and political portrayals of "the mentally ill" as "burdens", or, as I put it, "the great unwashed".

I doubt many people, on first meeting me, would be able to tell I have a mental illness (well, if they didn't take the bright clothes and pom pom earrings at face value, anyhow!) I'm bubbly, upbeat, friendly, and at first glance, confident. Not society's view of people who have had some of the life experiences I have; I rather suspect the tabloid press would instead expect me to be blithering in a corner.

It's almost as if the attitude to disabled people in general is that we are a problem to be solved, and, in extreme cases, that we originated the source of that problem ourselves. This is the medical model of disability. The social model is that society should accommodate the so-called "disabled", and give them every opportunity to not be a burden and instead make the most of their abilities; to contribute.

I mentioned sitcoms such as the pervasive Big Bang Theory, in which characters fairly regularly "accuse" each other of "acting totally psychotic". So often I have wished I could tell the writers of these shows that the word they are searching for is "psychopathic", and that they probably don't mean that their characters are being talked at by the washing machine (true story). 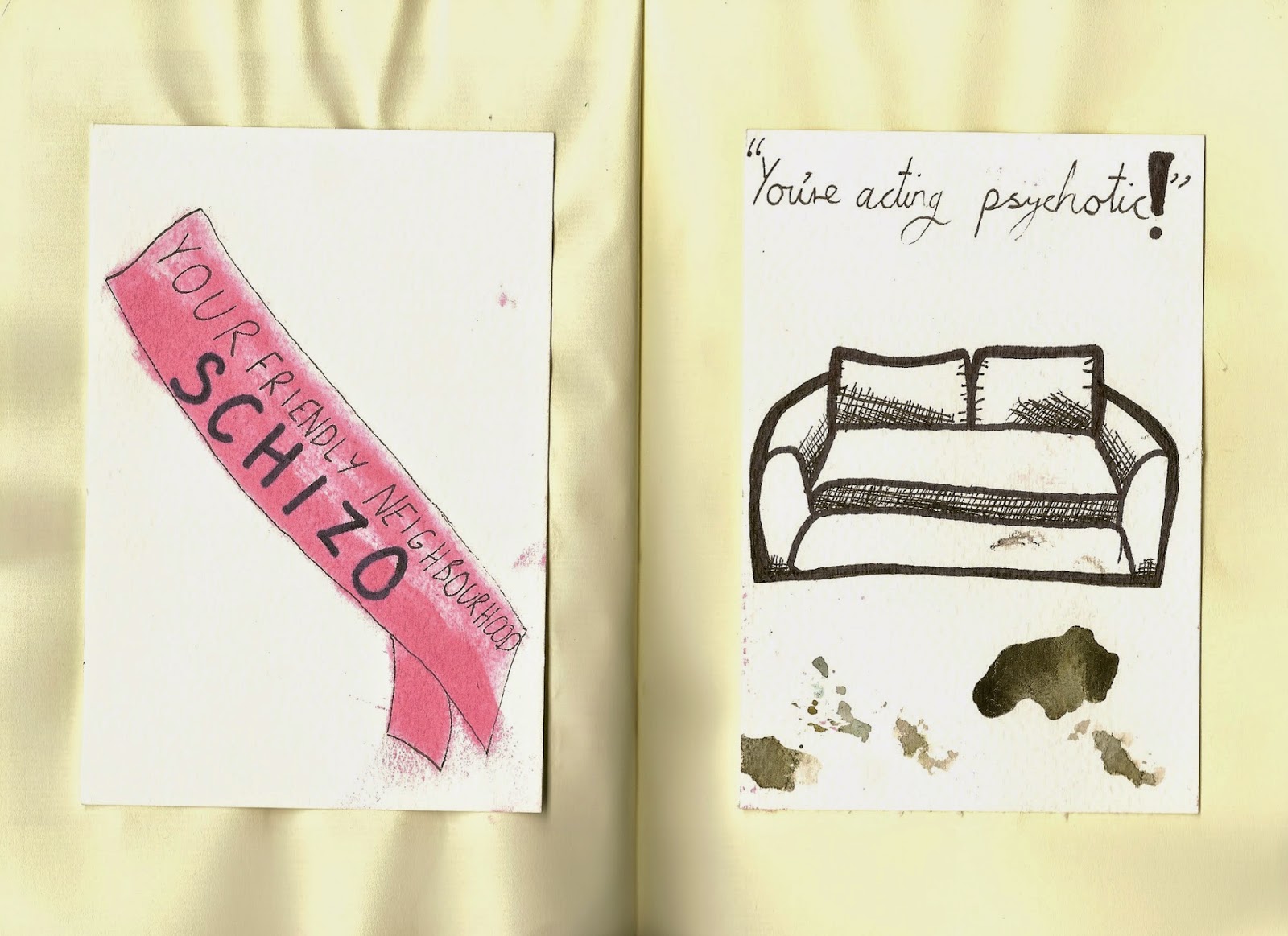 Misuse of language is not restricted to low-brow entertainment, either; in academic texts, slippery and changeable literature is sometimes referred to as "schizophrenic". The words these writers are searching for are "dissociative identity disorder". They are rather making the same mistake as Celtic fans did when they learned one of the team's players was schizophrenic and began chanting "Two Andy Gorams, there's only two Andy Gorams" at matches.

Luckily, despite our ranting and the odd #crazypersonproblems joke, we were there to talk about the work. Bobby shared with us the history of her career, struggles and triumphs as an artist, with her trademark warmth and generosity. Aidan Moseby presented his linguistic and empathetic ingenuity. It was fabulous to meet Jacqui Dillon, chair of the Hearing Voices Network, to know that there are so many people out there like me, we're not completely abnormal, and there is peer support for us. James, aka thevaccuumcleaner, talked about his deceptively simple utopic asylum project Mad Love, and his upcoming performance of his one-man show, Mental, in Sigmund Freud's bedroom, which I am so excited about.

Next week, on Thursday the 7th (election day!) and Friday 8th May, Daily Life Ltd are presenting their first micro festival. The Expert View brings together the work of Bobby and Daily Life and a whole host of artists, organisations and activists. These include Selina Thompson, who makes big-hearted, challenging, participatory performance art I could watch again and again, Jacqui of the Hearing Voices Network talking about her work in more detail (which unfortunately I won't be around for, but you should hear Jacqui speak if you can), and oh so many more. I'm gutted I can't get around to see it all, it's such an exciting prospect. Perhaps converse to your expectation of an arts and mental health festival, I guarantee that you will leave feeling elated. I always do when I spend time in the presence of these wonderful people. They are the future, and I am more than up for the ride there.

Posted by Kate Elisabeth Rolison at 10:36