I think two blog posts in one day is virtually unprecedented; I don't remember doing this (other than for brief announcements) since I posted daily during my final year of university. But I digress.

This week's #secretsofselfpreservation potion is quite a personal one (as if the entire project wasn't personal enough already!) I have been settling into my new job and trying to do the right, responsible, grown-up thing(s) and make the right choice(s). But after a particularly gruelling day this week I went out for burgers and to dance to a Blues Brothers tribute band some mates are in, and it reminded me that it's important to make the most of being young while I still am, too.

That is why this week's potion reads "Adult, but don't carry the weight of the world on your shoulders". That's "adult" as in the verb; "to adult". It's a very Web 2.0 term. 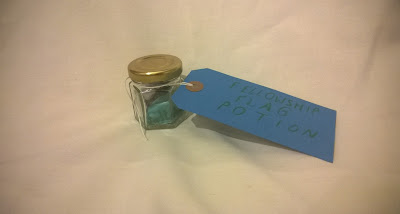 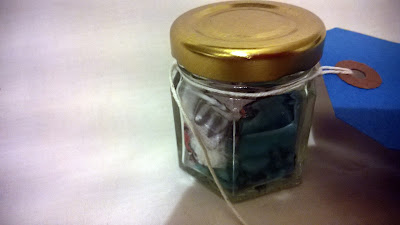 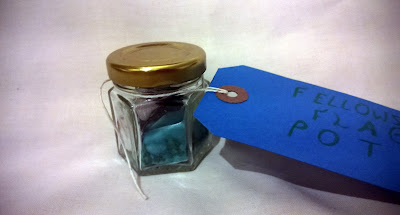 This week I handed in an entry to an art competition organised by Uniting Friends some of the young people I work with created. The theme of this year's competition was "Dear Prime Minister", and the young people made a double sided "flag" celebrating what they love about our centre, the legacy of William Morris in our community and building, and showing the way we feel about the cuts and the new government. So it made perfect sense to use snippets left over from the flag as the "potion ingredients" this week. There are offcuts of the fabrics the young people used as a patchwork representation of the centre's logo, including several William Morris prints, and a headline proclaiming "Young adults let down on basic skills"; something we try to reverse, in some very small way, through our work. 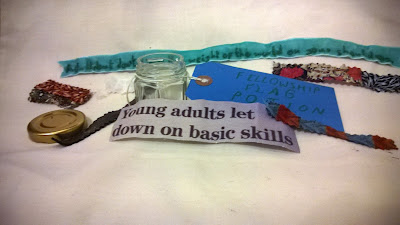 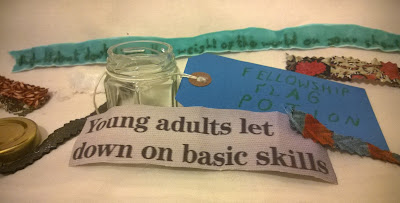 Posted by Kate Elisabeth Rolison at 14:52